People have been sharing their festive culinary disasters on social media – including one family that found the turkey they were about to eat was green when they carved it.

Other festive disasters include a boy who accidentally smashed his brand new skateboard into the oven, and a cat that got the cream – and the rest of the yuletide cake too.

User Sam Colderwood shared a picture of her mischievous furry friend after he made her way up the kitchen counters to nab the dessert prize for himself.

Sam wrote: ‘I hope you all enjoyed your Christmas as much as my cat enjoyed the @IcelandFoods chocolate gateau.’

There was plenty of turkey drama, too, with one user posting a photo of the meat he bought ready for the special day, but it had been pecked at by a magpie before he could get to it himself.

John B wrote: ‘Christmas is ruined. Turkey left outside because it was too big for the fridge. Magpie has had first dibs.’

The #RottenTurkey hashtag was trending on Twitter yesterday too, with many unhappy supermarket customers asking their respective shops why their bird had become rotten before its sell-by date.

Here, FEMAIL rounds up the most dramatic Christmas Day disasters: 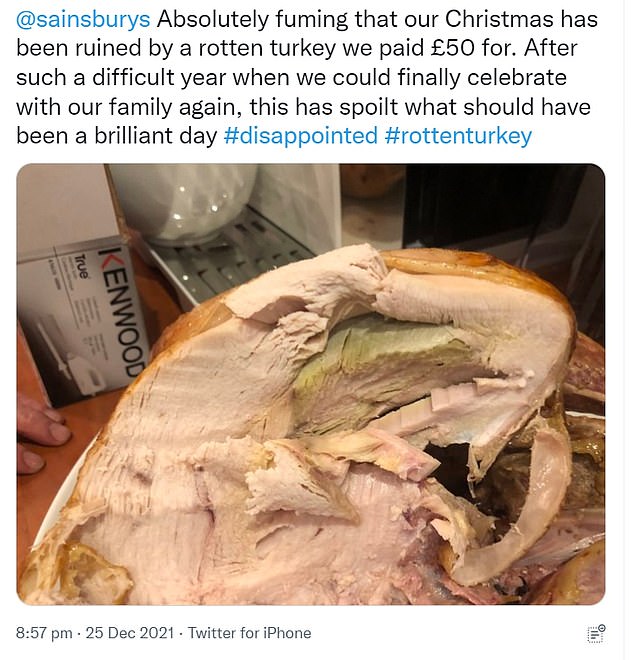 One user said he was ‘absolutely fuming’ that their Christmas was ruined by a rotten turkey he bought from Sainsbury’s for £50: ‘After such a difficult year when we could finally celebrate with our family again, this has spoilt what should have been a brilliant day’ 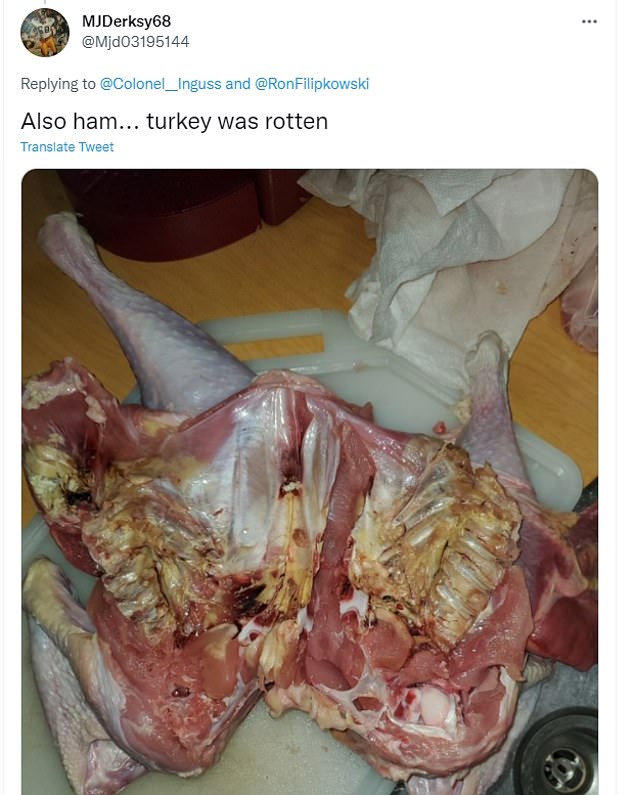 This Canadian Twitter user posted a disgusting picture of his ‘rotten’ turkey on Christmas Day, to add to the many others shared during festivities 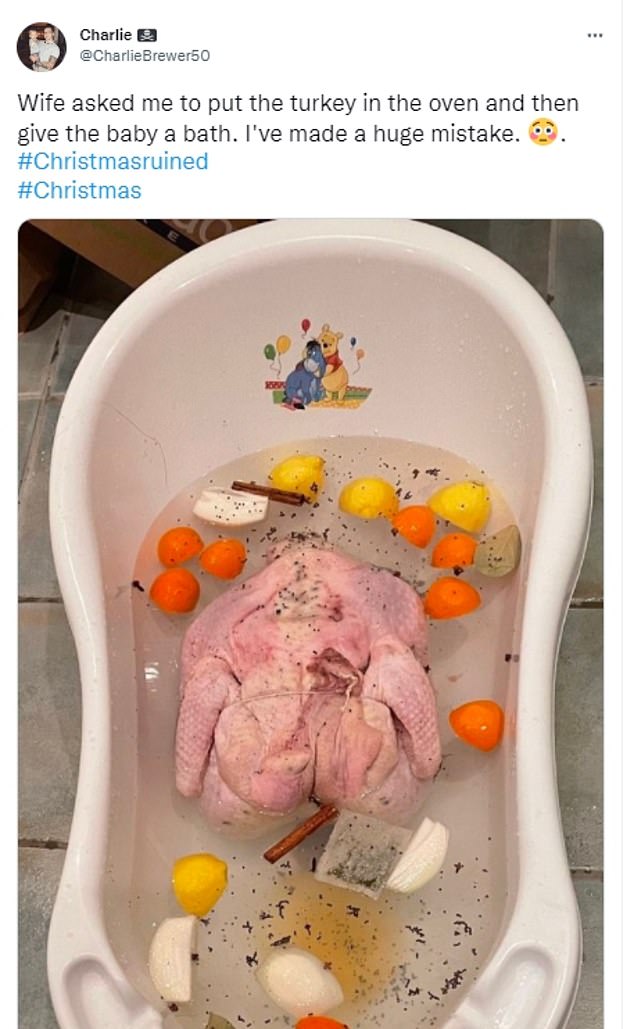 Bit of a misunderstanding: Charlie Brewer jokingly posted a picture of his Christmas turkey and seasonings in the bath, when his wife asked him to bath the baby 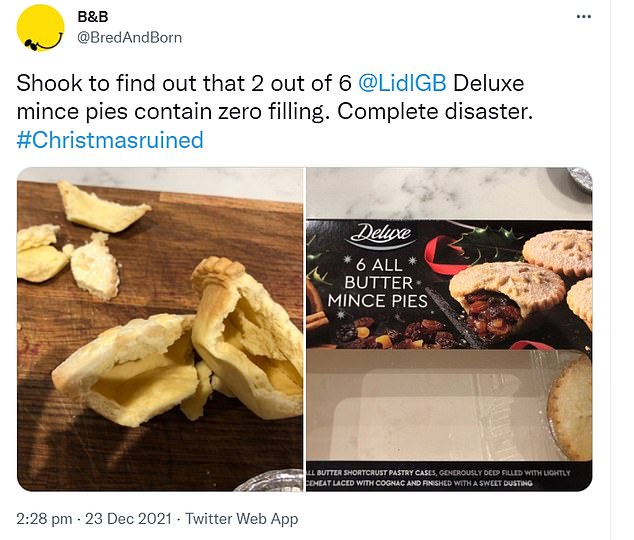 All-butter mince pies, but with no mincemeat… One user was ‘shook’ to find that two out of six of the Deluxe mince pies they bought from Lidl were empty inside 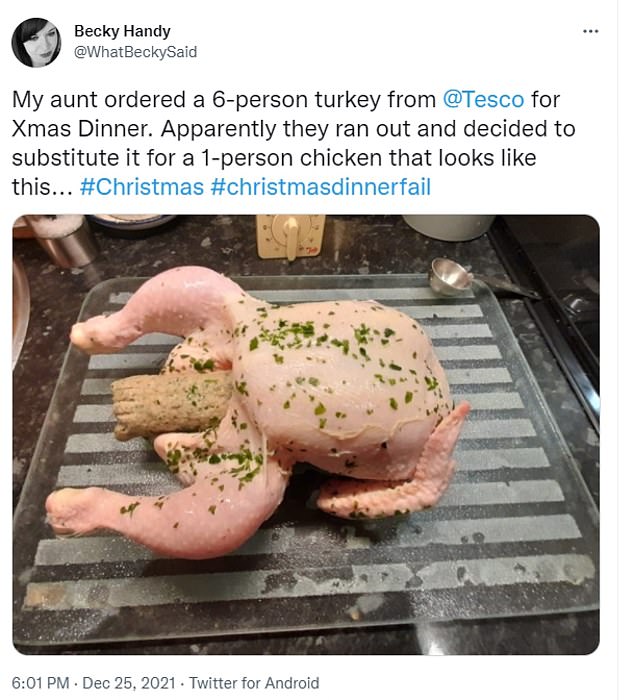 Becky Handy said her aunt ordered a six-person turkey from Tesco, only to be substituted for a one-person stuffed chicken – making for very small portions 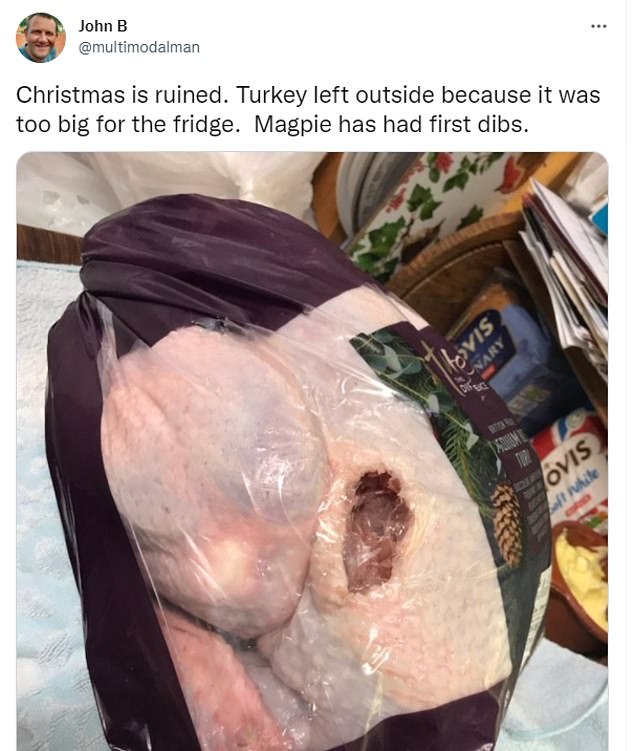 A magpie got to John B’s turkey before he and his family had the chance to – after leaving it outside because it was too big for the fridge, he took it back in for cooking to find it like this 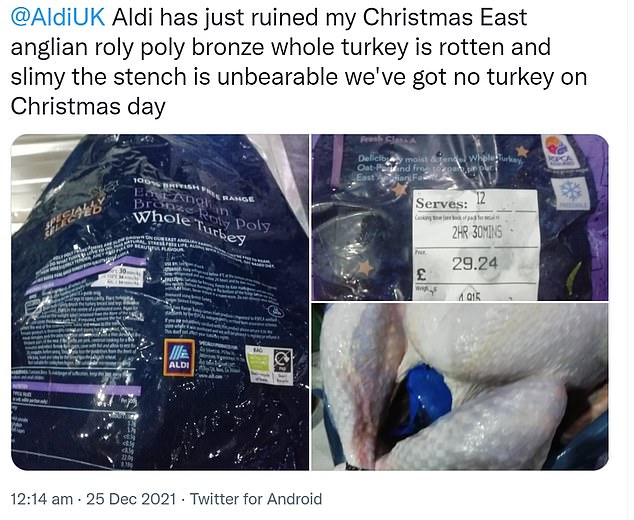 This person was not happy whatsoever after finding their Aldi roly poly bronze whole turkey was rotten with an ‘unbearable’ stench, leaving them with no turkey for Christmas Day 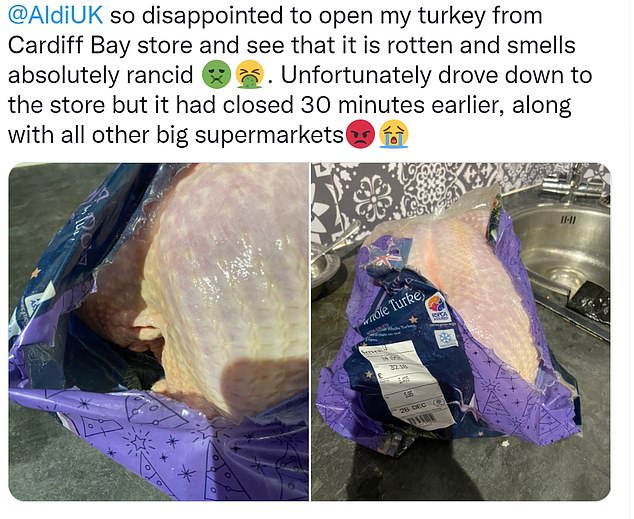 Another was equally upset with their rotten turkey from Aldi’s Cardiff Bay store, which smelt ‘absolutely rancid’, leaving them with no meaty centrepiece for their Christmas dinner 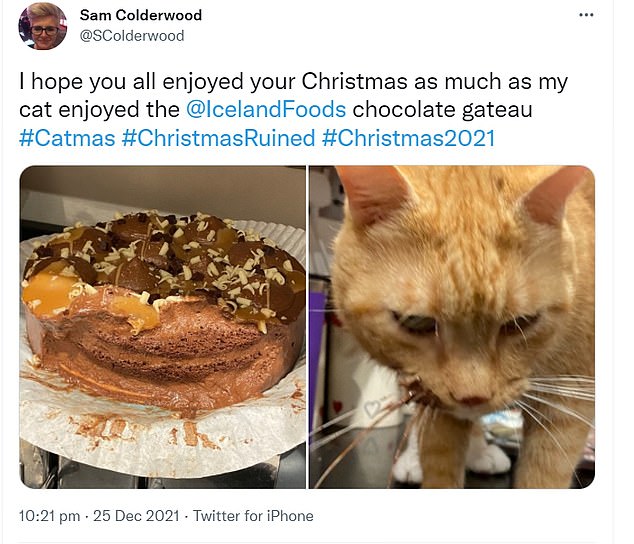 Sam Colderwood had a giggle at her cat, Stanley, who jumped up on the kitchen counter to taste a bit of her Christmas chocolate gateau for himself 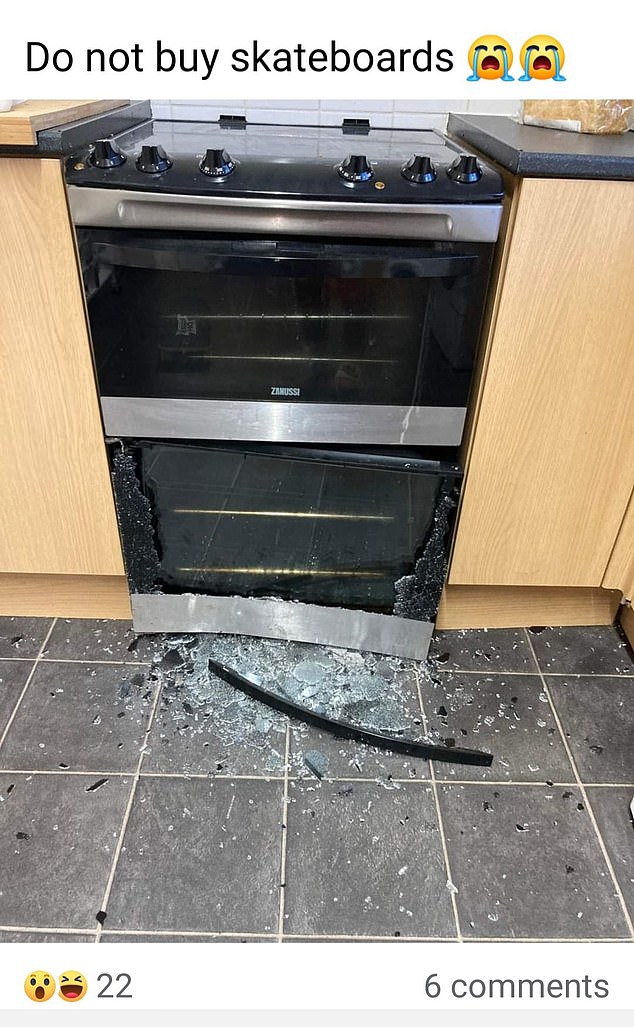 One woman captioned a Facebook post, later shared to Twitter, ‘Do not buy skateboards’ after her kid crashed into the oven with it – when some crucial Christmas cooking needed to be done 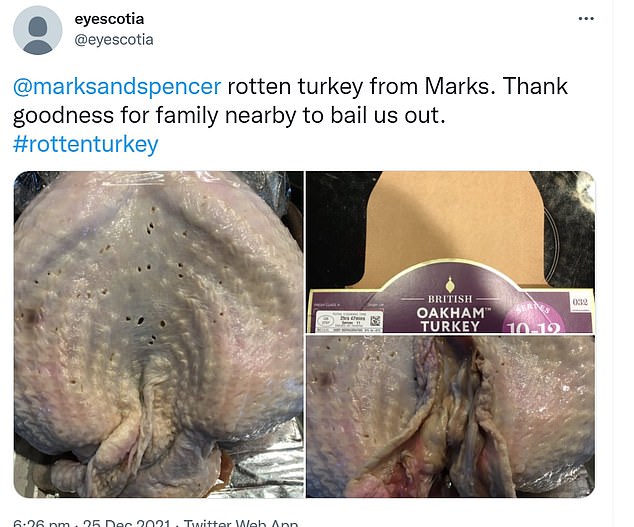 Another addition to the rotten turkey trend on Twitter yesterday, user @eyescotia shared pictures of her discoloured rotten Christmas turkey from Marks and Spencer