Australians will be getting booster shots to combat COVID-19 for years to come, with annual injections to become an integral part of the national vaccination program, according to the Pharmacy Guild.

National cabinet met on Friday to discuss the roll-out of the booster shot program to the general population, the vaccination of kids aged 5-11 – with a decision on this expected in the coming weeks – as well as the use of rapid testing and shorter quarantine periods.

Pharmacy Guild president Trent Twomey said there would be a need for booster shots “for the foreseeable future” to protect Australians against the coronavirus. 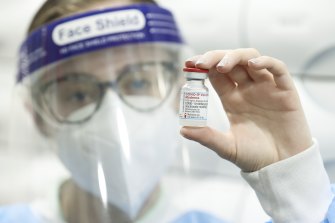 Pharmacist Chloe Langfield poses with a vial of the Moderna COVID-19 vaccine.Credit:Alex Ellinghausen

“The question is what booster and what interval we need to get that booster, whether its every six, nine or 12 months. Those decisions need to be based on evidence and facts and at the moment that is an evolving space,” he said.

Mr Twomey added “it will probably take until 2023 until we reach some sort of steady state vaccination program” that would involve one annual booster shot for the population, much as the flu shot has become annual.

“In time we will treat COVID like many other viruses that have been around for decades, and a COVID-19 shot will just be another element of the Australian vaccination program.”

Australia’s first booster shots for the general population will begin from Monday, with anyone who had their second dose more than six months ago eligible for a third shot.

Queensland, Tasmania and South Australia have flagged plans to begin opening up to other states and territories that have COVID-19 in the community from late November or mid-December once vaccination targets are reached, though WA Premier Mark McGowan announced on Friday his state would not open up until late January or early February when 90 per cent of people over 12 had been vaccinated.

Mr Twomey said that polling conducted by pollsters Crosby Textor for the Guild between October 8 and 18 focused on the one in 10 Australians who say they don’t plan to get vaccinated. It highlighted the important role pharmacists and GPs would play in the coming months in changing the minds of hold-outs. 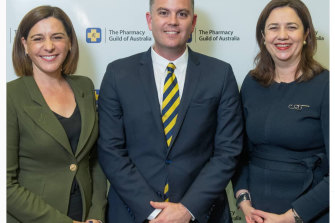 The polling of 2051 people also included specific questions for 1000 unvaccinated people on their reasons for not having the jab.

Queensland (17 per cent), South Australia (13 per cent) and Western Australian (12 per cent) were the three states with the highest percentage of “vaccine reluctant” citizens, compared to the national average of 10 per cent.

“Our messaging to date [about getting vaccinated] has been about altruism, a plea to be vaccinated to do the right thing to protect family and loved ones. We can’t take the same approach when we are talking about messaging to the hesitant,” he said.

“These people aren’t necessarily anti-vaxxers, they are hesitant. We need to communicate with these people differently, it can’t be emotive, it has to be factual.”

Mr Twomey said community pharmacies were well placed to do that as “we are the medicine experts” and dispense 450 million medicines to Australians each year.

To get at least some of those hesitant 10 per cent of Australians vaccinated “there needs to be structures in place where a GP or pharmacist can have a conversation with someone who is hesitant. That conversation will be longer, more onerous, but it could result in informed consent being attained.”

Stay across the most crucial developments related to the pandemic with the Coronavirus Update. Sign up to receive the weekly newsletter.