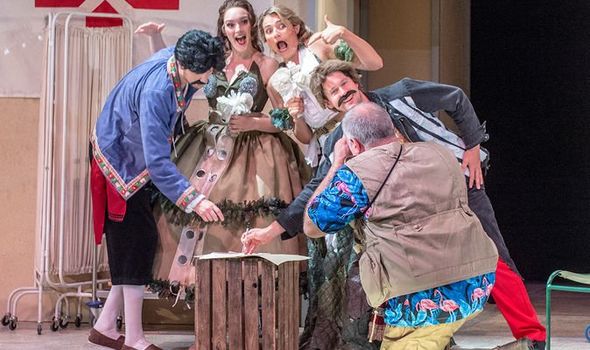 There have been other updatings that did or did not work theatrically. Whatever one thinks of Così fan tutte – loosely translated as All Women Are Like That it is clear that Mozart and his librettist, Lorenzo da Ponte, would not have got away with the opera’s subject matter and blatant sexism in this day and age. But for all its appeal as a light-hearted comedy on today’s international ‘favourites’ list, Così, with its first few outings in the Vienna of 1790, was considered to be vulgar and was barely staged at all before the Second World War.

Only in the Fifties did it begin to find its place in the repertoire.

Astonishingly, America didn’t get its première until 1922.

Which leads us to Christopher Cowell’s splendid production for this summer’s Dorset Opera Festival. Paired with one of the other two da Ponte operas (Don Giovanni) and with Händel’s Acis and Galatea – the latter in the Mozart orchestration – this production of Così took the audience out of its comfort zone and yet, the whole made complete sense!

In his programme note, Cowell reminds us that youngsters of the 1960s and 70s were encouraged to join VSO (Voluntary Service Overseas) for a few weeks in the summer months.

I doubt that this went as far as providing nursing staff for a field hospital behind the lines in a theatre of war on the Central American isthmus! However, with an illustration from the 1970’s TV dramedy series M*A*S*H in the programme, you get the idea of where this production is set. The transition works perfectly.

The nursing sisters, Fiordiligi and Dorabella were impeccably played by Samantha Clarke and Heather Lowe.

They – indeed the whole cast – acted as though they had been working and playing together all their lives.

But these two glorious young singers especially, gave an astonishingly fine account of their respective roles, their voices blending blissfully in their many duetting moments.

The ‘boys’, Ferrando (Peter Gijsbertsen) and Guglielmo (Jevan McAuley) were ideal soldiers going off to the ‘front’ complete with their ration packs and inflatable dinghy, then returning moments later as moustachioed infiltrators.

Cowell had devised some hilarious moments for the quartet, all of whom managed their ‘business’ impeccably. Most of this was of course carried out under the direction and watchful eye of Despina (Naomi Harvey) and Alfonso (Eddie Wade), two skilled veterans of the profession who made the most of their every appearance.

The pièce de résistance had to be the arrival of the sisters for the signing of their marriage contracts complete with Stewart J Charlesworth’s wedding dresses made from a mix of camouflage material and hospital bed sheets, but stylised to fit with the latest in fashion trends.

Which leaves me with the reduced Dorset Opera Festival Orchestra (I had to look to make sure it was reduced, because in all the operas, they played like demons and sounded very classy). Così was conducted by Argentinian, José Miguel Esandi who is now a regular in Dorset, but is based with the opera in Halle, Germany.

Just how this wonderful festival managed the Covid situation so magnificently, having to quarantine some of their artists, initially selling just 50% of their tickets then being given their freedom to sell more from 12 July, I shall never know. But they need to be congratulated for going ahead and making everything work so phenomenally well from Freedom Day onwards. Their audiences (and the singers and musicians) were clearly delighted to be back in the theatre.