Couple reveal how they turned their neglected back garden into a Thailand-inspired paradise for £2,500 – using sheets of bamboo and a large rug made from recycled straw

A couple have revealed how they spent £2,500 turning their neglected back garden into a Thailand-inspired Paradise.

Katy Roast, 47, and husband Ken, 68, from Barking and Dagenham, decided to revamp their outdoor space to create a place to unwind with ‘zen-like quality’.

The couple spent eight months transforming the area by snapping up secondhand and discounted items wherever possible and doing all the work themselves in order to keep the costs down.

Katy, who was the creative brains behind the project, and Ken, who drew upon his gardening, plumbing and electrical skills to take the lead on practical aspects, are now eagerly waiting for spring so they can enjoy their tranquil new space to the full.

‘The project was motivated by a desire for change,’ Katy said, speaking to money-saving community LatestDeals.co.uk. ‘We have a small rectangular garden measuring 5m x 15m, which is enclosed by 1.8m fence panels. After 10 years of not doing much to it, it had become dated and uninspiring. 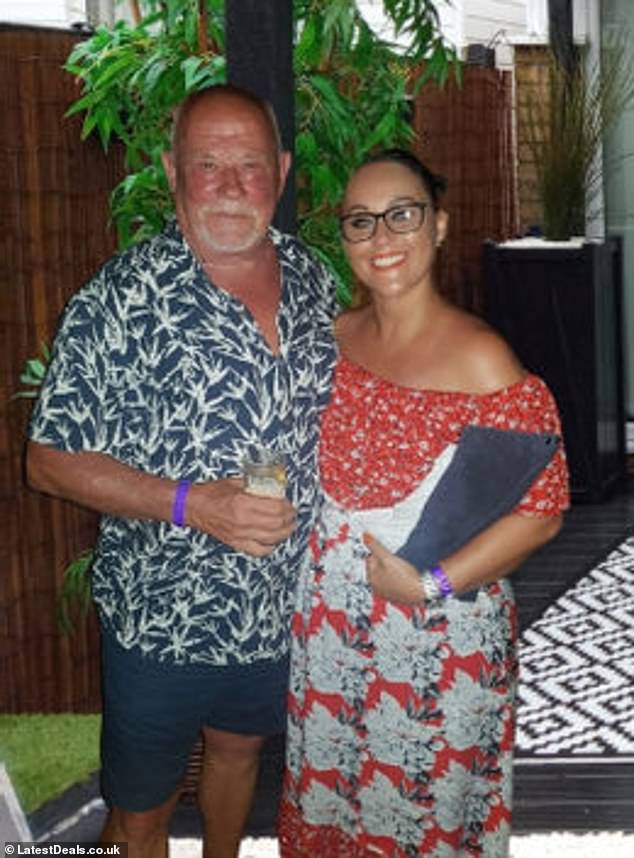 Katy Roast, 47, and husband Ken, 68, from Barking and Dagenham, decided to revamp their outdoor space 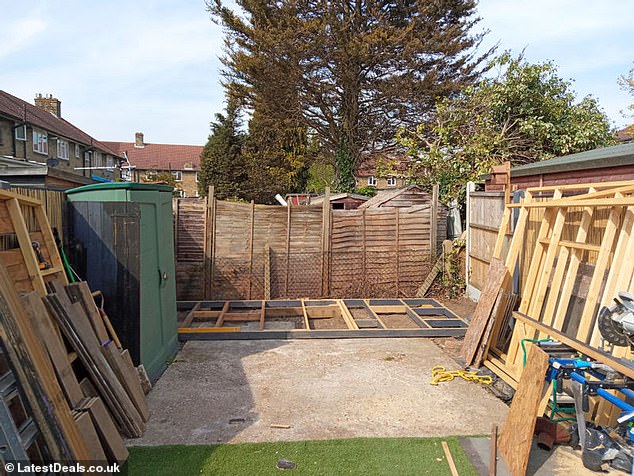 The couple said they had not touched their garden, a small rectangular space measuring 5m x 15m and enclosed by 1.8m fence panels, in ten years (pictured at the start of the work) 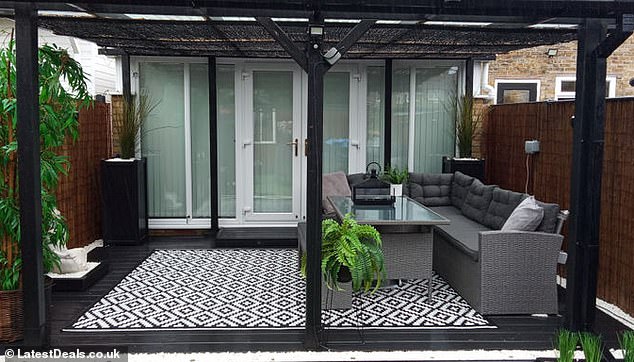 Katy and Ken spent £2,500 turning their neglected back garden into the Thailand-inspired Paradise (pictured after)

Katy went on to explain how neither are ‘green fingered,’ so they opted for low maintenance artificial grass and bamboo as the main materials to use for the project.

‘As we began the makeover, we noticed that some local branches of a DIY store were closing down,’ she explained. ‘It meant we were able to pick up some bargains, including the grass and bamboo, as well as some gardening ornaments that we used for the finishing touches.’

The couple got down to work armed with the main materials.

‘The first thing we did was cover the depressing fencing in sheets of bamboo,’ said Katy. ‘It gave an overall lighter finish that had a far softer effect.’

‘The next step was to replace the sandstone coloured patio. It met the conservatory doors at the back of the house and was a very hard surface to step straight out onto. We were keen to switch it for decking.’

Instead of digging up the patio and replacing it, which would have taken a lot more time and expense, the savvy couple decided to use it as a solid foundation for the decking. 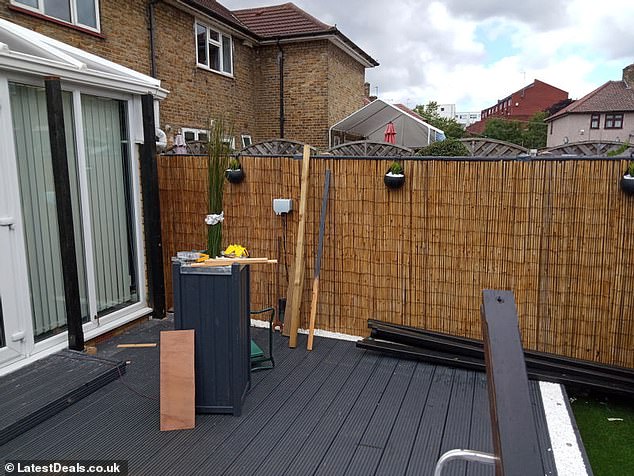 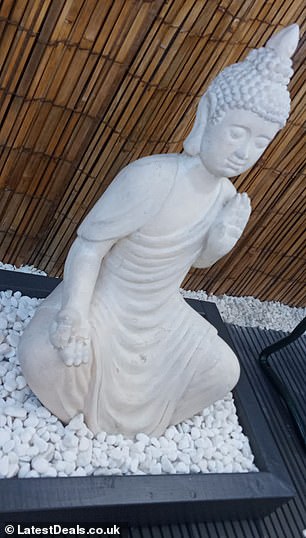 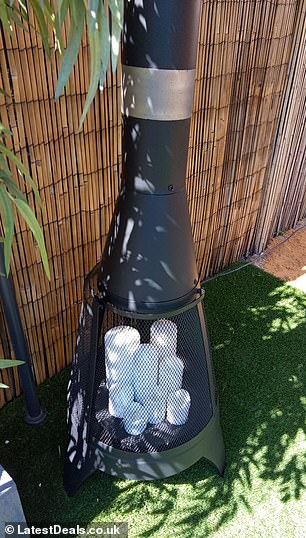 ‘We purchased the wood for the decking from a local timber merchant, which was far cheaper than getting it at one of our local DIY outlets,’ Katy continued.

They put down a damp-proof membrane and laid timber over the top to complete the sub structure, complete with a step-up to the conservatory.

Katy said: ‘The decking wasn’t hard to lay but getting it level onto the existing slabs of the patio was time consuming.’

Speaking about laying the artificial lawn, she added: ‘It was a challenge to level out the subsoil beneath the membrane.

‘We used a 2.4m length of 50 x 100mm timber, which was dragged and pivoted across the surface. Any recessed areas were tamped and filled by hand where necessary. Finally, we added a layer of sharp sand. 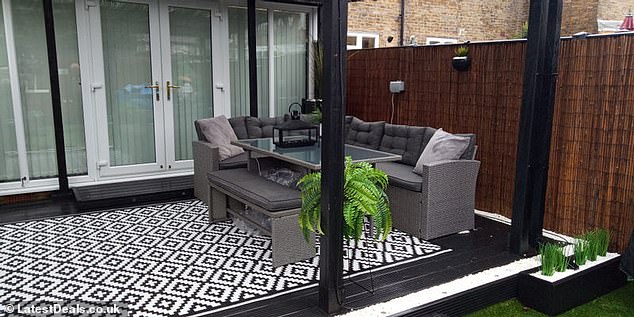 The decking area was given some extra definition by adding white pebbles around the edges of the decking, which was the perfect place to install the lights

‘As there is little footfall we took a bit of a shortcut by not bothering to get it bowling green flat. We took the grass right up to the workshop at the end of the garden.’

The couple were keen to create a space all year round so set about finding a way to rainproof it.

‘We wanted to build a shelter to shield us from the unpredictable British weather,’ Katy explained. ‘We didn’t want a totally enclosed space, so we opted for a pergola with a transparent PVC roof.’

She was able to find a perfectly-sized secondhand pergola for sale locally.

‘It had been built in treated pine by the original owner and was constructed to a very high standard,’ Katy revealed. ‘We had to dismantle it and rebuild it with some minor alterations in order to fit the space.

‘We gave it a lick of charcoal paint to match the colour scheme and then fitted it completely over the decking.’ 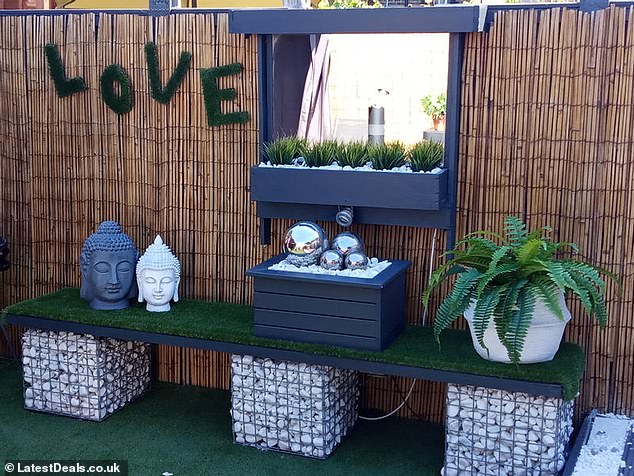 The feature area was decorated with Buddha head statues, a mirror to bounce the light around, a faux plant and letters made from leftover artificial grass that spell out the word ‘love’ 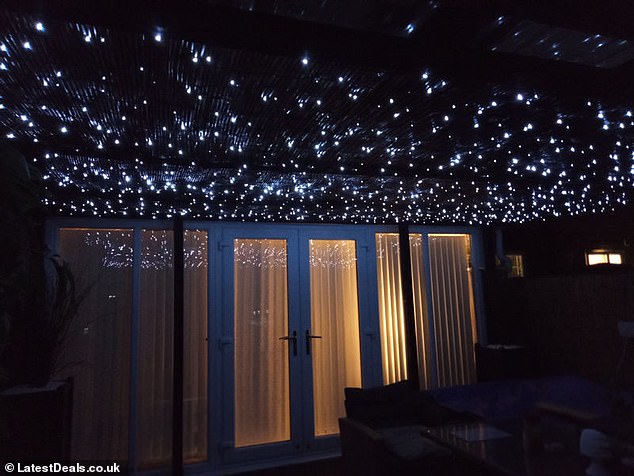 The couple quickly realised that they would need to attach it to the existing conservatory to ensure stability.

Katy continued: ‘This was the challenging aspect of the project. We had to attach two posts to the brickwork of the conservatory using rawlbolts.

‘After that, we secured a five-metre length of timber to both posts and fixed these to two supporting posts secured to the decking.

‘Once the pergola was up, we realised that we didn’t like the view of the corrugated roof, so we decided to obscure it with willow fence panels and solar powered fairy lights to give the effect of stars above our heads.’

The decking area was given some extra definition by adding white pebbles around the edges of the decking, which was the perfect place to install the lights.

The white pebbles were also added to the three gabion baskets, which were used to make a bench for a small water fountain.

‘This was initially a planter, which was fitted with a pond liner and small pond pump,’ said Katy.

The feature area was decorated with Buddha head statues, a mirror to bounce the light around, a faux plant and letters made from leftover artificial grass that spell out the word ‘love’.

Katy added: ‘There’s also a main female sitting Buddha statue, named Tara, which was a birthday present from my husband.’

The garden furniture was bought online from ManoMano and the chiminea was another secondhand find.

‘It was in need of some TLC, so I spray-painted it charcoal and placed a few battery powered pillar candles inside,’ said Katy. ‘The large rug on the decking is made entirely from recycled straws. We bought it from Green Décor and it was a small extravagance.’

Garden design complete, all that was left to do was to sit back and enjoy.

‘Spending time in the garden helps to take us back to the experience of being in Thailand,’ added Katy. ‘It’s so relaxing to be able to sit and look at all the hard work we have done – it has really paid off. Ken is out there under the pergola for hours in all weather.’

Tom Church, Co-Founder of LatestDeals.co.uk commented: ‘We could all benefit from a calming space to retreat to and this tranquil garden is just the ticket.

‘Katy and Ken kept a lid on their budget by seeking out secondhand and sales items wherever possible. ‘It goes to show that searching around for the best deals pays off in the end.’