CRAIG BROWN: A portrait that paints Picasso as a monster of cruelty

A Life Of Picasso Vol IV: The Minotaur Years

Anyone planning on writing a very long book in late middle age is embarking on a race against time.

John Richardson started work on his Life Of Pablo Picasso in 1980, when he was 56. The first volume – which ended with Picasso aged 25 – was finally published in 1991, when Richardson himself was 67. 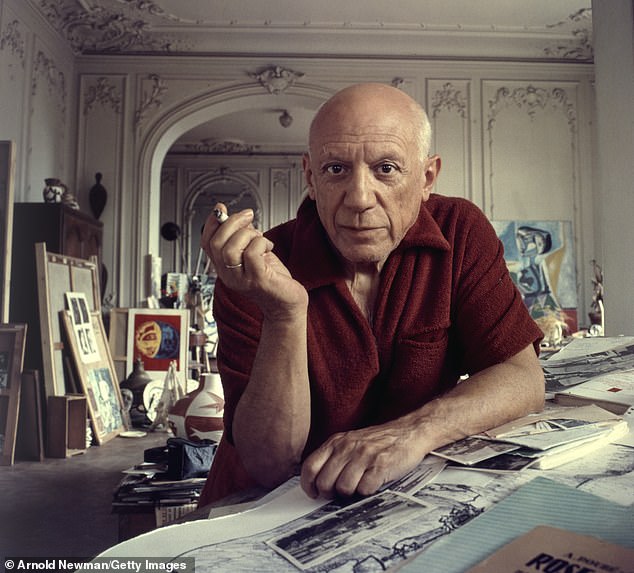 Picasso (above) was always manically competitive, so I (Craig Brown) imagine he would be delighted to have given his biographer the slip

By 2016, Richardson was employing three assistants to help him with writing and research, but this was a race he could never win. He died, at the grand old age of 95, in 2019.

Three years on, the volume he was working on has at last appeared. Half the length of the others, it comes to an end in 1943, a full 30 years before Picasso’s death.

Picasso was always manically competitive, so I imagine he would be delighted to have given his biographer the slip, particularly as Richardson unwittingly portrays him as a monster of cruelty who delighted in the suffering of the many women he conquered, not least his mistress, Dora Maar, best known as the model for his Weeping Woman.

‘Picasso’s art tended to thrive on the dark side,’ is his conclusion to what is now his final volume. 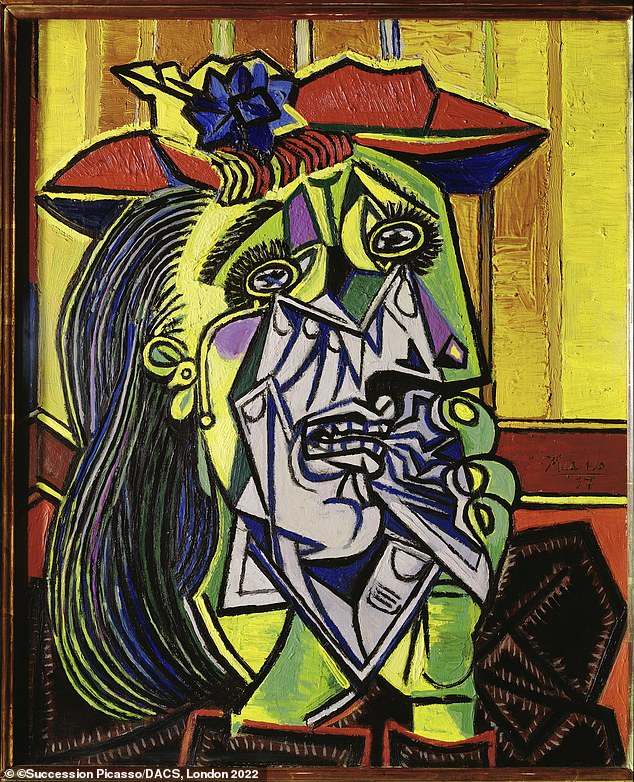 John Richardson portrays Picasso as a monster of cruelty who delighted in the suffering of women, including mistress Dora Maar, the model for his Weeping Woman (above)

‘He had destroyed Dora, beaten her to bits and cut her up in paint. He would tell Françoise [Gilot, another lover] that he had never loved Dora. He had sacrificed her on the altar of his art. Her tears and suffering had galvanised his work.’

In the previous volume, The Triumphant Years, Picasso married a Russian dancer called Olga, even though his tough old mother had tried to warn her off with the words: ‘I don’t believe any woman would be happy with my son – he’s available for himself but for no one else.’

Nearly ten years into their marriage, Picasso – a habitual user of brothels – began an affair with a pretty 17-year-old called Marie-Thérèse, who was a willing initiate into his S&M world.

‘The women in his life were expected to read the Marquis de Sade,’ noted Richardson. Picasso painted many portraits of Marie-Thérèse but generally as a guitar, or a jug, or a fruit dish, in order to conceal their affair from his wife. 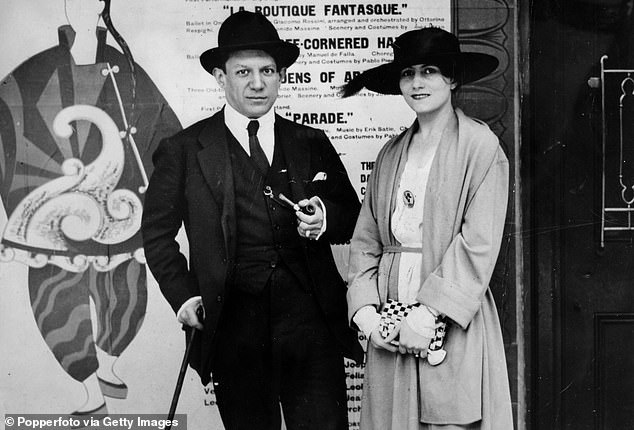 In the previous volume, Picasso married a Russian dancer called Olga Khokhlova (above, with Picasso in 1917), even though his tough old mother had tried to warn her off

This latest volume begins with Picasso the most celebrated painter in the world and poor Olga a wreck. ‘Picasso’s extramarital affair(s) and his violence contributed to Olga’s physical and mental debacle,’ writes Richardson.

‘Debacle’ is an odd word to use in this context and reveals something of Richardson’s lackadaisical attitude to the sufferings of Picasso’s women.

He writes of Picasso’s ‘loathing’ of Olga, a loathing represented in painting after painting, often as a ‘hideously toothy’ horse being savaged by a charging bull, its innards sprawled across the canvas.

Richardson calls one of these pictures ‘a masterpiece of marital hatred’. There are moments when he appears willing to connive in Picasso’s sadism. Did Richardson himself harbour what he might have called a ‘tendresse’ for Picasso? 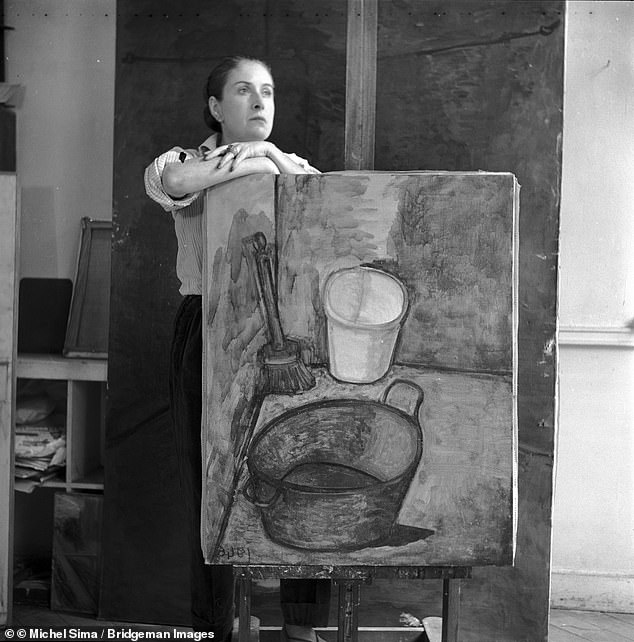 Picasso’s next mistress, Dora Maar (above) first excited his attention by picking up a knife and stabbing the gaps between her fingers

When writing about the paintings, he manages to see male organs everywhere. A nose is ‘penile’, a stretch of a woman’s neck ‘monstrously erectile’, a Roman helmet ‘irresistibly phallic’, and even a scoop of ice cream ‘testicular’.

Picasso finally left Olga in the creepiest way possible. After taking her out for a romantic night at the opera, he undressed her and made love to her.

‘The next morning she was awakened by her maid: there was a gentleman waiting in the salon who wished to speak to her. “You go,” Olga said to her husband, since she wasn’t dressed. “Certainly not,” he replied, “it’s you he wants to see.”

‘Ten minutes later, Olga returned from the salon looking very pale, clutching a document the visitor had given her: a summons to appear in court in order to respond to a divorce suit her husband was bringing against her.

‘Picasso wandered off, singing Pagliacci at the top of his voice.’

Picasso’s next mistress – though it was never an exclusive position – was the ill-fated Dora Maar, who first excited his attention by picking up a knife and stabbing the gaps between her fingers.

Every now and then she would miss by a fraction, so her hand was soon covered with blood. Picasso, we hear, was ‘fascinated’ by what Richardson calls this ‘kinky ploy’.

Such a clear sign of masochism aroused Picasso, though he soon tired of her depressive personality, and the more he tired of it, the more depressed she grew. Yet he kept on painting her.

One painting is described by Richardson as ‘a scary woman caged in claustrophobic space, looking as if an electric chair were about to be switched on’.

Picasso was more at ease with Marie-Thérèse. Richardson compares his many portraits of the two women, ‘the one so spiky, so complex, so dark; the other so serene, so loving so peaceful’.

The book is gloriously produced, with, in this case, paintings of the two contrasting women printed opposite each other.

Richardson is regularly proclaimed as one of the greatest of all biographers but, for all his expertise, I find his prose random and bitty, and his viewpoint at one and the same time too Olympian and too catty.

However, his meticulous, almost day-by-day chronicling of the artist’s frenetic life does serve to convey his ferocious energy. The reproductions in the book are testament to Picasso’s uncontained genius.

Richardson was a friend of Picasso and never passes up an opportunity to promote the fact. ‘I was present when…’ begins a typical sentence. ‘Years later, Dora told me that…’ begins another.

Sometimes these openings give way to reminiscences that are peculiarly irrelevant. For instance, in 1937, Picasso spends weekends at a house owned by his art dealer, Ambroise Vollard.

‘I can vouch for the charm of Vollard’s house,’ Richardson chips in.

‘One summer in the 1950s his heirs lent it to Douglas Cooper and myself for a week or two. It was old but not ancient, and comfortably furnished. There was no longer any trace left of Picasso or Marie-Thérèse or anyone else…’

Even Picasso’s most monumental canvas, Guernica, an outcry against the Nazi bombing of that Spanish town is, he insists, ‘pervaded with Picasso’s own problems and preoccupations’.

He then recalls that ‘Dora told me that she had been the inspiration for the woman on fire as well as the long-legged woman in the foreground’.

True or not, chit-chat like this diminishes the impact of the work, reducing an outcry against an atrocity to a centre-spread from Hello! magazine.

Nonetheless, every page carries an entertaining story or a fascinating gobbet of artistic gossip.

For instance, we hear that in the summer of 1937, Picasso bought a pet monkey, which he named Beretzof. He spent so much time teaching him tricks that Dora grew jealous.

Things changed when, one day, Beretzof bit Picasso’s finger. Someone then told Picasso that King Alexander of Greece had died from a monkey bite back in 1920.

Loyal to neither man nor beast, Picasso lost no time in returning Beretzof to the pet shop.