I’ll have a Big McEverest and fries, please! CRAIG BROWN on thirteen things you didn’t know about Big Macs

2. There are over 36,000 McDonald’s outlets in the world, with more opening every week. The highest McDonald’s in the world is on the summit of Mount Everest, which accounts for the recent queues.

3. The town of McNuggets, Texas, is believed to have the highest proportion of McDonald’s restaurants per capita in the world, with one outlet for every three adults.

‘There’s no one in this town who don’t appreciate a Big Mac,’ says mayor Ronald McDonald, who changed his name by deed poll five years ago. The town has only one Kentucky Fried Chicken outlet, but customers seen passing through its doors tend to be ostracised by the community at large. 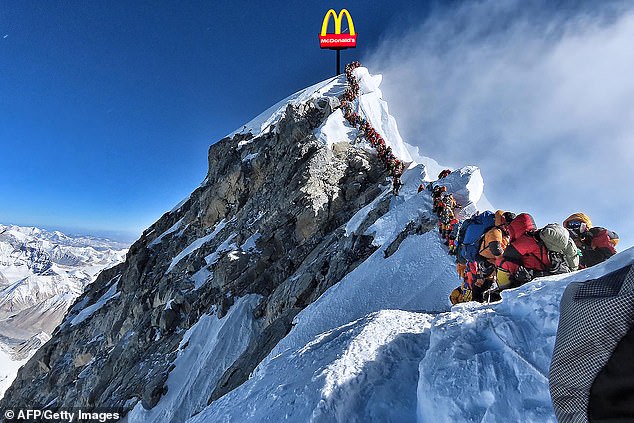 There are over 36,000 McDonald’s outlets in the world, with more opening every week. The highest McDonald’s in the world is on the summit of Mount Everest, which accounts for the recent queues

4. Donald Trump is accelerating his plans to open a ‘small but very, very beautiful’ branch of McDonald’s in the White House, decorated in gold leaf, with gold tables and chairs stapled to the floor. Positioned next to the Oval Office, in the recently vacated Office for Truth and Reconciliation, this branch will serve only the President and his highest-ranking officials, along with visiting heads of state. 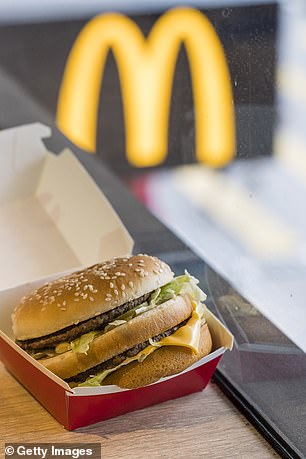 The Big Mac was named after 1950s PM Harold Macmillan, who enjoyed tucking into a burger and French fries while reading a Jane Austen novel if ever a meeting of his Cabinet hit a dull patch

5. McDonald’s takes a fierce pride in offering its customers a range of new dishes. Inevitably, over the years, one or two them have failed to catch on. These include the Double Sardine Cheeseburger (1967), the McSquid Sandwich (1973), the Filet-O-Offal (1982), the Egg McBroccoli (1998) and the Spicy McCoxcomb (2007).

7. The world-famous Golden Arches logo was introduced in 1957, after two archbishops had been spotted in the San Bernardino branch queuing for Big Macs in their mitres.

8. McDonald’s tailors its meals in different countries to cater for variations in local tastes. For example, some Australian branches serve the Wallaburger, and in the smarter areas of France the perennially popular Filet O’ Frogs Legs is a key part of the menu.

9. Drive-thru branches, known as McDrives, are increasingly popular, as they allow drivers and their passengers to order and eat without alighting from their vehicles. Plans are now afoot to introduce a ‘straight-to-mouth’ McDonald’s, to be known as the McGob, in which customers will be fed directly by staff, thus saving them all the bother of lifting the burger to their mouths.

10. The apostrophe has always been a vital part of the McDonald’s brand. The firm’s 36,000 branches worldwide means 36,000 apostrophes, with apostrophes displayed outside the bigger outlets measuring over 5ft high and weighing anything up to 18 kilograms. Analysts say that without such a strict adherence to punctuation, the company would be able to shed all 36,000 apostrophes, which could then be upturned and given to children’s charities as novelty boats or rocking chairs.

11. With space at a premium and meals so popular, the company is pushing ahead with plans to open the first McDonald’s inside a McDonald’s, so that those who have just eaten a meal will be able to queue for the same meal all over again, but in different surroundings and without leaving the premises. ‘We call it the all-round McExperience’ explains a spokesperson, adding: ‘We are also hoping to introduce McHotels, with McBeds, McBaths, McPillows and McViews from the McBedroom windows.’

12. The Big Mac was named after 1950s PM Harold Macmillan, who enjoyed tucking into a burger and French fries while reading a Jane Austen novel if ever a meeting of his Cabinet hit a dull patch.

13. In Albuquerque, New Mexico, a married couple threatened to take McDonald’s to court after the Happy Meal they had ordered ended in tears.

‘She said I never done nothin’ ’round the house, so I said, if that’s what you think, then I sure ain’t never taking you out dinin’ agin and then she hollers and screams. That’s not what I call a Happy Meal.’

McDonald’s is now thinking of introducing a series of Unhappy Meals, targeted at outlets close to divorce courts and multi-storey car parks.