Public transport usage is down by about 90 per cent across Victoria and Metro Trains is bleeding up to $12 million a week as more people stay at home to stop the spread of coronavirus.

Intense discussions about a rescue package to save thousands of jobs are now under way between the Andrews government and the transport operators, with services set to be cut to a weekend timetable in coming weeks amid tightening containment measures. 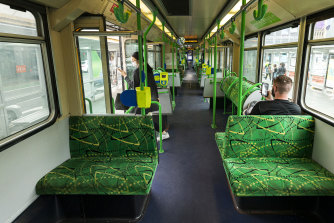 Leaked figures show the number of people using Melbourne's trams nosedived by 88 per cent this week, with just 81,600 passengers compared with an expected 708,300. The week before, about 285,000 passengers used the tram network.

Passenger numbers on city and country trains are understood to have similarly dropped by between 85 and 90 per cent.

As the network becomes increasingly deserted, the private operators are locked in talks with Treasurer Tim Pallas, Public Transport Minister Melissa Horne and department officials about a rescue package that would quickly replenish falling revenue to ensure the companies remain viable and jobs are not shed.

Metro Trains, which takes 40 per cent of the state's fares, was set to make about $330 million in passenger fees this year, the company's contract shows. Sources say it is now losing $8-$12 million a week.

Yarra Trams, which takes a similar cut of the state's fares, was set to make $164 million from fares this year.

The companies are also concerned about diminishing advertising and tenants' fees, while more than half of Metro's takings come from major projects it is contracted to build, which could now be put on hold.

The operators are paid a minimum monthly fee from the government in the event of a drop in patronage but their franchise agreements had not envisaged such a dramatic fall in passengers.

The Rail, Tram and Bus Union and the Transport Workers Union have called on the government to ensure that any tighter COVID-19 restrictions do not include the closure of mass transit services.

“Many workers in our health sector, emergency services and food supply chain rely on public transport to get to work," RTBU state secretary Luba Grigorovitch said.

The RTBU is also moving closer to signing a pay deal with Metro in a bid to lock in a 3.5 per cent annual wage increase ahead of a major economic downturn.

"Trains are near empty. Platforms are deserved. The revenue of the private operators has plummeted," a motion from the rail division's delegates meeting stated, in a bid to urge support for Metro's pay offer.

With fewer people using trains, trams and buses punctuality across the network has skyrocketed.

An analysis by Daniel Bowen of the Public Transport Users Association shows about 95 per cent of Metro's services ran on time on Thursday, compared with 88 per cent of services a month earlier.

About 93 per cent of trams ran on time on Thursday, compared with 79 per cent on Friday, March 3.

A government spokeswoman said the Transport Department is "considering a raft of measures to protect employees and passengers in line with expert medical advice".

"The government is working with operators to keep our network moving and support jobs during this unprecedented time."