Daughter spots her mum's incurable cancer after noticing she shrunk

A detective who was left shocked after noticing her mother had shrunk by four inches has explained how the revelation pointed to her mum’s incurable cancer.

But standing alongside her mother, in December 2020 she suddenly noticed her mother was now smaller than her.

Grandmother-of-four Alison was relying on Tramadol to treat back pain which never improved, and was increasingly hunched over.

A tape measure showed mum-of-four Alison, from Edinburgh, had shrunk from 5ft 6in to 5ft 2in. 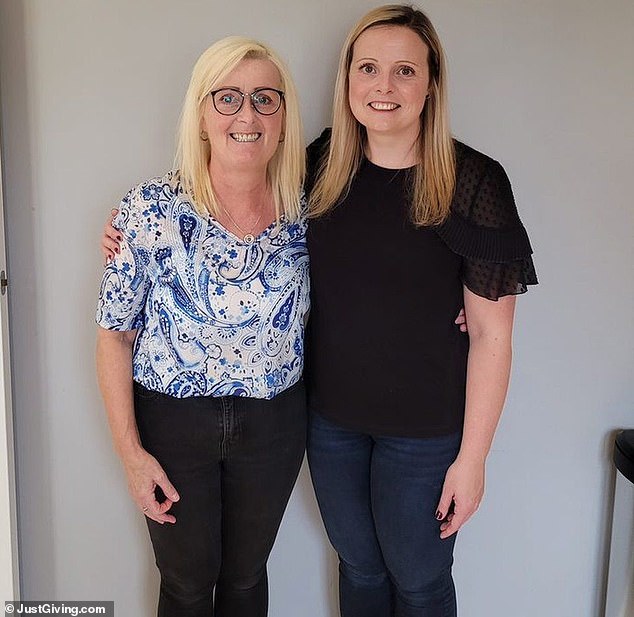 Alison McDonald (left) had always been taller than her daughter – so when she suddenly shrank below her height, the family knew something was wrong 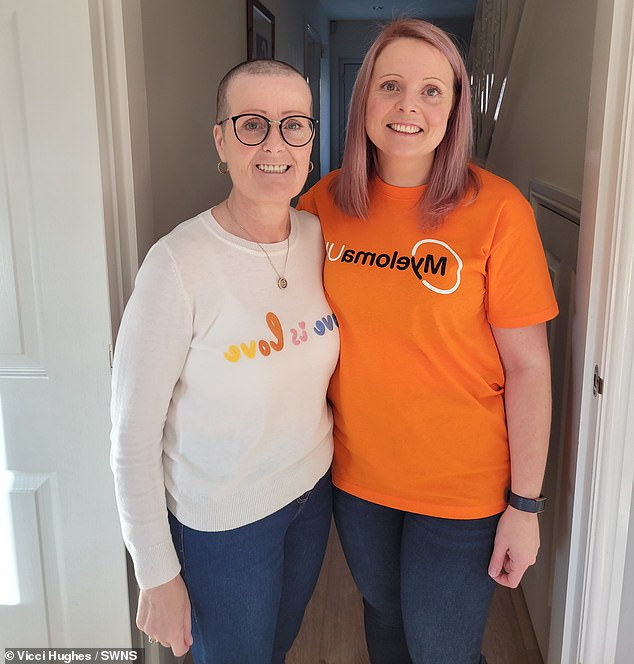 Mum-of-two Vicci urged Alison to get checked out and her GP referred her to A&E.

At the Edinburgh Royal Infirmary, multiple unexplained fractures were spotted on Alison’s spine when an X-ray was carried out.

Alison was given a back brace which was so uncomfortable she couldn’t wear it, as well as painkillers, and was sent home.

In April, Alison’s GP noticed that she still hadn’t had any follow up and referred her back to the hospital where she had an MRI scan, which showed holes in her bones.

Samples of bone marrow led to a diagnosis of myeloma – a form of blood cancer that is treatable but not curable.

Mum-of-two Vicci said: ‘She had had a sore back for a couple of months and it wasn’t getting any better, she was constantly having to get Tramadol. 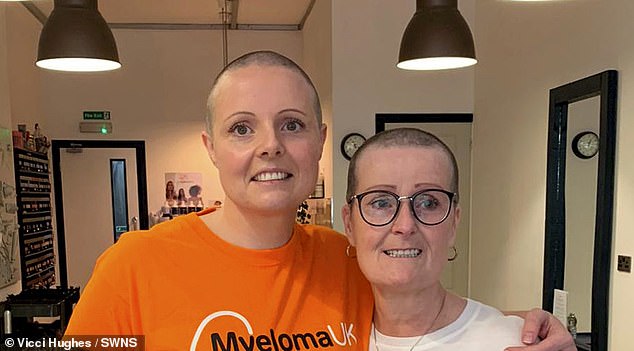 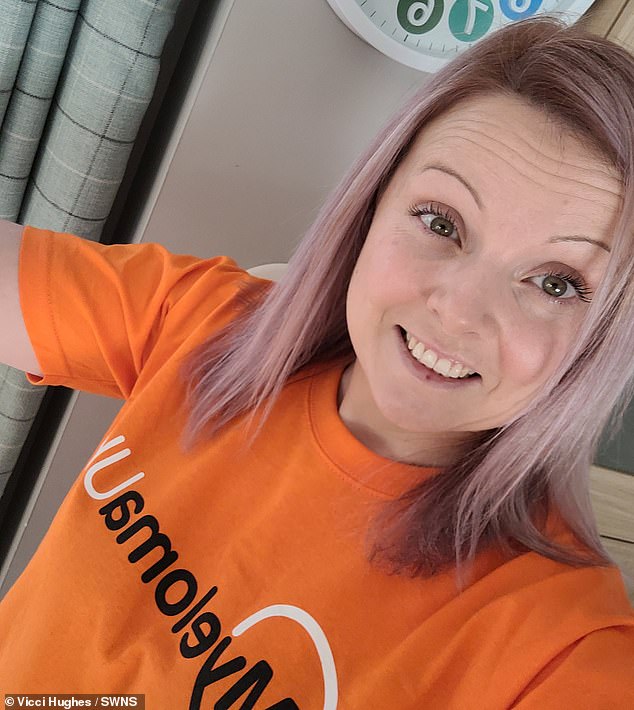 Vicci Hughes before having her head shaved. She noticed her mother had shrunk from 5″5 to 5″2 in what seemed like a matter of weeks

‘The day we realised, we were in mum’s kitchen and I thought, “something’s not right”.

‘She was hunched and she’d never been hunched before.’

‘I said to her, “Mum, you’ve definitely shrunk”.

‘So we got the tape measure out and put her against the wall to measure her.’

‘I can’t say she lost all that height within just a couple of weeks, because it could have been gradual.’

‘She was starting to realise there was something not right.’

Alison is the main carer for her daughter Ashley, 24, who has Down’s Syndrome.

Vicci said: ‘Despite everything she was telling them, they were sure it was muscular and gave her a sheet with exercises on it.

‘If she had done those exercises, the damage she could have done could have been quite significant.’

In April 2021 Alison returned to the Western General where she was diagnosed with cancer.

In May she began daily injections in the forms of chemotherapy and in November, began stem cell harvesting.

The family hope her treatment will be completed in November so she is well enough to enjoy Christmas. 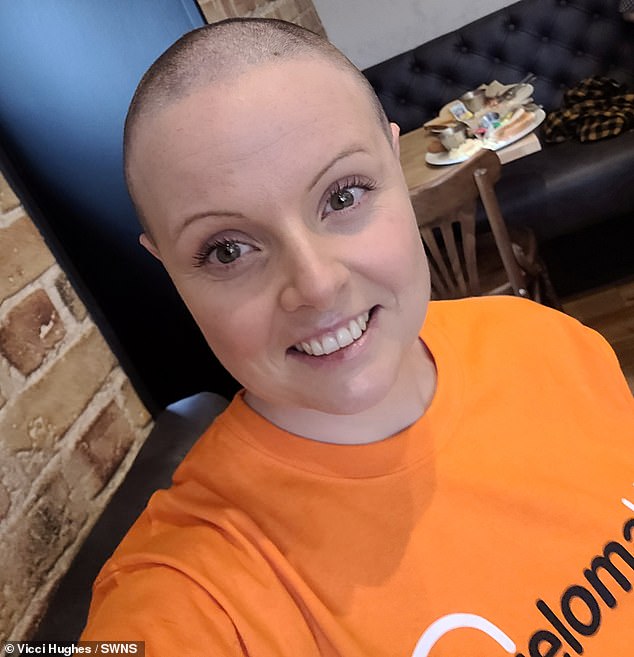 Police officer Vicci was standing next to Alison in December last year, when she noticed the disparity in height

Vicci said: ‘The transplant has got all sorts of other symptoms, that are going to floor her for a good number of weeks, potentially months.’

‘She can hopefully finish treatment in November to start a recovery before Christmas.’

‘She has not been crazily ill all the time, she has a lot of days where she feels better.’

‘Her pain in her back and bones is almost gone, so that has given her a lot more freedom.’

‘I think her nerves are shot sometimes with the thought of what is to come.’

What is multiple myeloma?

Multiple myeloma is a cancer that begins to form in bone marrow.

While plasma cells ordinary help the body fight infection, in people with multiple myeloma the cells that live inside soft marrow rapidly develop to cause tumors in hard marrow.

As it causes the tough bone to weaken it makes it difficult to develop good blood cells and platelets.

There is no cure for the rare form of blood cancer.

As the second most common cancer in the United States, approximately 30,000 African Americans are diagnosed with multiple myeloma each year. Unexplainably, black people are twice more likely to develop the disease than white people.

Some medical experts believe that occupational exposure can play a part in developing the disease. Sufferers with jobs that expose people to petroleum, herbicides, heavy metals and an extensive list of other things have a higher likelihood or developing the blood cancer.

Most people who suffer from the disease are over 45 years old (96 percent). Over 65s are 63 percent of the group.

Men are more likely to have multiple myeloma.

Those with a family history of it are four times more at risk. People considered obese are also at higher risk.

Monoclonal gammopathy of undetermined significance (MGUS) has also been linked.

While MGUS – the development of abnormal monoclonal protein produced by white blood cells – can be considered unproblematic, some have linked it to multiple myeloma.

Complications can include anemia, kidney failure, dangerously high levels of calcium in the blood, organ infection and fractures or a loss of movement.

‘Because it’s so different for everybody, they really have no idea.’

‘I suppose nobody really wants to know how much time they have left.’

She added: ‘When they knew my mum had fractures that were unexplained, somebody has dropped the ball somewhere and not followed up as quickly as they should have.’

‘My mum probably could have had her treatment sooner.’

‘We just have to be grateful now that we know what it is and we can do something about it.’

Dr Tracey Gillies, the medical director of NHS Lothian, said: ‘We are unable to comment on individual patient cases without their consent.’

‘We would ask anyone who has any questions or concerns about their care or treatment to contact us and discuss directly.’