DAVID MELLOR: They're sending us to hell in a handcart

DAVID MELLOR: They’re sending us to hell in a handcart on the back of a dossier so dodgy even Tony Blair wouldn’t have touched it

Surely now is the time for Boris Johnson to offer the courage of his hero Winston Churchill.

We need it more than ever. Yet last week he became the reincarnation of LedruRollin, the French revolutionary, who, as the mob rampaged through Paris in 1848, declared: ‘I must follow them, for I am their leader!’

What else can we make of his decision to hide beneath the mess of unreliable and inaccurate data from Chief Scientific Adviser Sir Patrick Vallance, and his Chief Medical Officer Chris Whitty?

After some pretence of sticking up for his Chancellor Rishi Sunak, the one resolute figure this Government has yet produced, Johnson then followed his Brexit supremo Michael Gove, and his Health Secretary Matt Hancock, in swallowing everything Vallance and Whitty served up.

There seems no statistic so obviously exaggerated, no invitation to lock the country down too economically disastrous, no appeal to save the NHS too ridiculous for Gove and Hancock to swallow hook line and sinker. 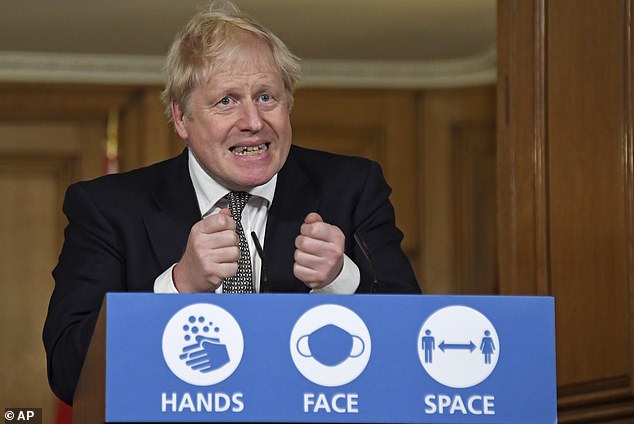 DAVID MELLOR: Surely now is the time for Boris Johnson to offer the courage of his hero Winston Churchill

You’d think that Boris would have learnt his lesson about Gove, who did for him in his first run to be PM. He should perhaps recall the wise words of David Niven about Errol Flynn: ‘You always knew where you were with Errol. He’d always let you down.’

Hancock and Gove are a sad example of what Margaret Thatcher especially deplored in her Ministers: ‘agency capture’, being taken over by the entity you were sent to reform. But it seems this unlikely duo nevertheless persuaded Boris to abandon Sunak, and throw his support behind a lockdown.

The comparison with Thatcher is telling. As a junior Health Minister, I worked on the 1980s Aids pandemic. Another coronavirus, as it happens, HIV was a horrific development, a death sentence for most who caught it in the early stages. There was every reason for serious concern and individual caution.

Yet Norman Fowler, the then Health Secretary, did not wheel out grim-faced scientists and medical officers to terrify the public with charts and graphs. He did not allow the equivalents of Professors Gloom and Doom to dictate Government policy.

And we Ministers most certainly did not hide behind their skirts while claiming to be ‘led by the science’. Instead, we listened carefully to the advice the experts gave us behind closed doors – and then told the public what they needed to know and how to change their behaviour in order to keep themselves safe. It worked.

Despite her powerful convictions and strong views, Thatcher surrounded herself with considerable politicians who were capable of giving her courageous advice. I am talking about the calibre of such people as Willie Whitelaw, Nigel Lawson, Kenneth Clarke, Leon Brittan and Lord Carrington. These were not only men of high intelligence, but characters willing to brave her anger and argue back. 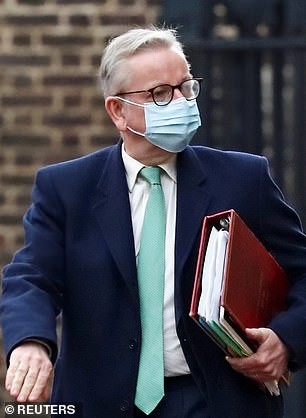 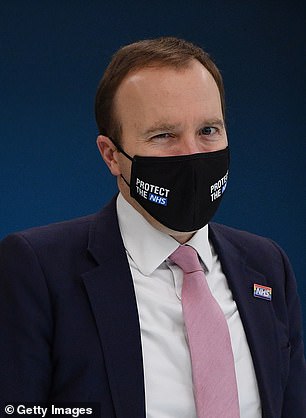 DAVID MELLOR: There seems no statistic so obviously exaggerated, no invitation to lock the country down too economically disastrous, no appeal to save the NHS too ridiculous for Gove (left) and Hancock (right) to swallow hook line and sinker

I cannot say the same of Boris, whose Cabinet seems utterly feeble by comparison. At times, it seems the Government itself has been reduced to the single Rasputin-like figure of his chief adviser, Dominic Cummings. It was not only at Westminster that Thatcher was well-advised, of course.

Still more essential was the support of her husband Denis at home, a source of emotional support and shrewd guidance. It is hard to imagine the arbitrary shutdown of bars, rugby clubs and golf courses were Denis still in Downing Street. What sort of help or advice, I wonder, does Boris get at home? To me, he cuts a lonely, isolated figure and one who, increasingly, seems to have little appetite for the momentous job in hand. It’s perfectly obvious to all but the wilfully blind that this appalling lockdown decision was made using flawed data.

At the PM’s much-delayed press conference last weekend, Whitty and Vallance insisted that – in the worst case – a terrifying 4,000 a day could soon be dying of Covid-19 unless we were locked in our homes. That bogus, exaggerated statistic fell apart within a matter of hours. The main estimate offered by Whitty and Vallance of 1,500 deaths a day was soon exposed as too high by at least 30 per cent.

Boris should have known that the methodology was all wrong well before his lockdown decision was announced on Monday because that very same data had predicted 1,000 deaths the previous day. In fact there were only 200. Why look in the crystal ball when you can read the book? The evidence to stop this catastrophe was all there but Boris was too lazy to turn the pages.

Professor Carl Heneghan of Oxford University and his team, beacons of common sense in the encircling gloom of risible rubbish, said this of the Government’s lamentable decision: ‘Continually they have overestimated the numbers that are going to die, mis-categorised Covid19 deaths, and exaggerated the impact on hospitals.’

Just so. Heneghan condemned their insistence on rushing out worstcase scenarios, irrespective of accuracy. Which is exactly what happened last weekend and why we are in the mess we’re in now. If this is so obvious to Heneghan, why isn’t it obvious to Boris, with all the access to information he has at No10?

The data in the latest dodgy dossier is so spurious that even Tony Blair and Alastair Campbell at their most cynical would not have embraced it. It is hardly reassuring to know that the British economy is going to hell in a handcart on the basis of such exaggerated nonsense.

And yet Johnson, Gove and Hancock wolfed it down like starving animals. It’s getting to the point in this pandemic where none of us can readily believe a word they say. When I was Chief Secretary 30 years ago, the National Debt was 20 per cent of our annual GDP.

Now it’s more than 100 per cent, and will rise sharply in the coming weeks as a result of the extension of the furlough scheme till next March, and other excessive spending decisions. I look at my two-year-old granddaughter playing happily and I think, with near certainty, that she’ll be paying for all this for the whole of her adult life.

And so, maybe, will her own children and grandchildren. When Boris was a kid, he apparently said he wanted to be ‘world king’. He’s got a lot nearer to that than most of us expected.

So why doesn’t he try a bit of hard work to ensure that the decisions he takes are sensible and will enhance his reputation and the country’s prosperity, instead of misusing his exceptional ability simply to disguise with verbal flourishes how little real effort he actually puts in?

The greatest violinist of the 20th Century, Jascha Heifetz, was so gifted that he could have skated through every concert he gave without preparation.

For Heifetz it was a matter of pride to be the best he possibly could be. So why doesn’t Boris take pride in being able to see through these Covid charlatans, and set a clear course for the country, and then stand by it, as Churchill would have done?