The post-Logies headlines focused on the outstanding newcomer award for ABC News Breakfast’s Tony Armstrong and the speech by The Project’s Lisa Wilkinson when she accepted the award for outstanding news coverage. But, in his customary style, making a quieter yet equally noteworthy contribution to the event was Sam Pang.

A regular attraction on Ten’s Have You Been Paying Attention? and Seven’s The Front Bar, and a co-host of Nova’s breakfast radio show, he had two relatively short appearances on stage. The first – alongside Have You Been Paying Attention? host Tom Gleisner and quiz-show playmate Ed Kavalee – was to accept the show’s award for most popular comedy program. He subsequently took to the stage solo to receive the most popular actress award on behalf of Fisk’s absent star, Kitty Flanagan. 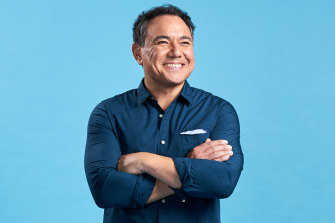 Pang used the first appearance to deliver a perfectly observed remark about the politics of the room, noting that the team from Travel Guides, which got the gong for best lifestyle program, was placed so far from the stage that they could’ve done an episode of their show about the journey from the backblocks to the podium. Subbing for Flanagan, he remarked that his speech was already longer than his appearance in the first season of Fisk, pausing to note that he hadn’t been asked back for the second.

In addition to his mastery of the pause – which is a specialty – this was classic Pang: deadpan, funny and self-deprecating. And such was the impact of those cameos that the next day a betting agency was touting him as a potential Gold Logie candidate and a future host of the ceremony. Without wanting to invest too much significance in such predictions, one could surmise that, amid the epically long telecast, his brief appearances were appreciated.

While the persona of some comedians is indignant or argumentative, Pang is deceptively mild-mannered, more inclined to sly mischief. Though highly visible, he manages to convey the impression of a quiet man and, in the shows on which he appears regularly, he’s a stealthy and productive disrupter, frequently cracking up his co-stars with his quips. And he clearly plays well with others, as both HYBPA? and The Front Bar are team sports, relying on the chemistry between the participants to create the desired spark.

Yet in an industry where attention is avidly courted, he’s played the game his own way while working in a steady stream of gigs. As he’s built a career from origins as a volunteer at Melbourne’s community radio station 3CR, before moving on to Triple R’s Breakfasters, he’s been a media personality who’s preferred his privacy. In an environment inclined to oversharing, and an industry that actively encourages it, he’s resisted the impulse and any pressure from behind the scenes. 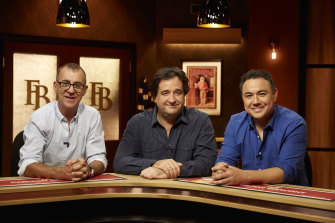 Pang with co-hosts Andy Maher and Mick Molloy on The Front Bar.Credit:Channel Seven

If you’ve watched Front Bar, you might’ve gleaned that he once worked in a bottle shop, played AFL for Collingwood under 19s and in the VFA team, Prahran, earning the nickname “The Orchid” because, he’s wryly explained, he only flourished in perfect conditions.

In marked contrast to the approach of many media players, he has a scant social media presence. You won’t find him posting pictures of his breakfast, his baby or his adorable new puppy on Instagram, let alone happy snaps with his partner. Interviews are granted rarely and reluctantly.

I scored one in his early TV days, before he had the clout to graciously decline. In 2009, he was hosting the short-lived SBS history quiz ADbc, which paired historians with comedians with the idea of demonstrating that history could be fascinating and fun. Promoting the production, Pang gave an indication of the qualities that have made him such an entertaining and enduring TV presence: warmth, wit and humility. “The academics who’ve come on have picked up that we’re not trying to make them look silly,” he explained. “They’re an integral part of the show and their knowledge is what the comedians feed off. It’s more interesting and it’s more fun to see people work together. We’ve found that the academics are a lot funnier than you might think and that the comedians know a lot more than you might expect. To me, that seems like a really good mix, with a host who doesn’t know what he’s doing.” 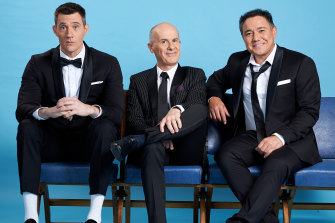 Ed Kavalee, Tom Gleisner and Sam Pang from Have You Been Paying Attention?Credit:Tina Smigielski

The self-deprecation has long been there. For eight years he co-hosted SBS’s coverage of the Eurovision Song Contest with Julia Zemiro, initially noting that he knew nothing about the event. But he proved an ideal foil for Zemiro, who’d followed the glitter-fest since childhood. When they retired from the role in 2017, he said: “There are only so many sequins, burning pianos, power ballads and singing Russian grannies one man can celebrate in a career.”

In 2018, when he did the podcast Santo, Sam and Ed’s Cup Fever! in the lead-up to and during the World Cup, he also professed not to really know why he was there. Cilauro and Kavalee were the experts, he maintained: he just turned up and deferred to them on all matters soccer-related.

One of the reliable pleasures of watching HYBPA? and The Front Bar is seeing how much the participants enjoy each other’s company. For viewers, that sense of fun is irresistible. And Pang, though he’d probably hate to be singled out for attention, is a key contributor.

If that Gold Logie nomination does pan out, pity the poor publicist charged with guiding his campaign to glory, because it would be an Everest-like challenge built around someone who steadfastly rejects that kind of attention. And cheers to him for that. His work speaks eloquently for itself.