The head of Victoria’s fourth-biggest university has flagged making COVID-19 vaccinations mandatory for students and staff, arguing people who avoid getting vaccinated are making a choice “that is at best ill advised and potentially verging on the negligent”.

Deakin University vice-chancellor Iain Martin raised the prospect of introducing mandatory vaccinations for students and staff from the start of the first semester in 2022. 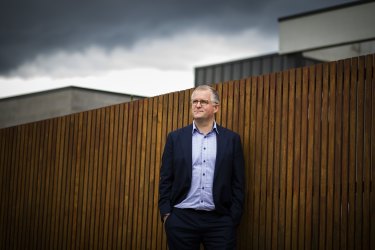 “Not taking up [the vaccine] is at best ill advised and potentially verging on the negligent”: Deakin University vice-chancellor Iain Martin.Credit:Paul Jeffers

“Once the entire adult population has access to vaccination, which will be later this year, I believe … we need to consider very carefully whether we mandate vaccination to continue to be part of our university community,” Professor Martin said.

The message came as the Therapeutic Goods Administration gave provisional approval on Monday for use of the Moderna coronavirus vaccination.

Victorian Premier Daniel Andrews said he would not make COVID-19 vaccinations mandatory for the state’s 300,000 public sector workers, beyond those in high-risk health roles.

“We’re not really mandating anybody at this stage beyond I think aged care workers,” Mr Andrews said. “Millions of Victorians who want to get vaccinated [are] just waiting for the supply to turn up.

“The number of people who logged on yesterday and made an appointment because AstraZeneca was available to them for the first time in state clinics says to me that some of the hesitancy that we all seem to be talking about is perhaps not as real as we thought.”

In NSW, a Liberal MP from western Sydney said on Monday she would lead the charge to block any move to make vaccinations mandatory for construction workers, highlighting party division on the issue as the state battles its worsening COVID-19 outbreak.

And Prime Minister Scott Morrison last week ruled out at a federal policy level mandating COVID-19 vaccinations, saying that businesses must decide for themselves when it comes to enforcing jabs for workers.

Victoria’s approach contrasts with parts of Europe where vaccines have been mandated or encouraged in different ways. Italy began enforcing on Friday a “health passport” for those who want to eat indoors or visit places such as museums, gyms and theatres.

In France, similar measures to tackle the pandemic have prompted protests, while in the US cities are dividing into those that require vaccine passes, such as New York, and large parts of the nation where even requesting people wear masks is seen as an affront to civil rights.

In the United Kingdom, the over-50s are almost entirely immunised against COVID-19 and 94 per cent have had two jabs. Meanwhile, those aged 18 to 35 have full immunisation rates varying between 20 and 50 per cent.

Supply in Australia has been a major issue for young people, who have had little or no access to Pfizer’s vaccine and were told in April by Mr Morrison that the widely available AstraZeneca product was only for those aged over 50. In June, the AstraZeneca vaccine – which the federal government bought 54 million doses of – became recommended only for those aged over 60, because of a very rare blood-clotting issue.

Deakin University’s Professor Martin said there was a compelling case for requiring students to be vaccinated to join in university life, given young adults are statistically the most likely to catch the virus.

“Look at the data from the Sydney outbreak and from other outbreaks around the world: which population spreads COVID-19 the most?” he said. “It’s the most socially mobile population and that’s our 18-30 year-olds, which is where the vast majority of our student population sits age-wise.”

Professor Martin, a former dean of the Faculty of Medical and Health Sciences at the University of Auckland, stressed that these were his views, not the university’s position.

“I am unequivocally of the view that we have a duty to be vaccinated unless there is an overwhelming health reason why an individual cannot take any of the available vaccines.”

A number of US universities including Harvard and Princeton have mandated vaccines. Last month, a federal judge ruled against a group of students’ legal challenge to mandatory vaccination at the University of Indiana.

But the head of Australia’s higher education union said it was inappropriate for employers to mandate vaccinations without first consulting health officials, governments and the union.

“Employers need to ensure that they support our national health response by ensuring that there are no disincentives for employees to get vaccinated,” National Tertiary Education Union president Alison Barnes said.

Universities should provide paid vaccination leave for staff, particularly casuals, who may not have paid sick leave, Dr Barnes said.

National Union of Students president Zoe Ranganathan said it was important to vaccinate as many students as possible, but suggested Deakin should consider using a less “punitive” approach.

“A better approach would be somehow incentivising students by giving them some tangible benefit aside from being vaccinated – whether it’s an on-campus voucher or free membership to their student union, for example – rather than a punitive approach.”

Deakin – which has campuses in Burwood, Geelong and Warrnambool – had a COVID-19 scare when a staff member visited the Waurn Ponds campus while infected.

“Governments and employers need to tread very carefully outside the very obvious high-risk areas like aged care and healthcare, and the focus needs to be on supply right now,” he said. “We should be focusing on more carrot and less stick. If mandatory vaccinations are brought in more broadly in the future, we need to make sure that there are exceptions for people who have genuine health or religious reasons.”

Another union leader stopped short of saying there should be mandatory vaccination, while encouraging members to get immunised. Victorian Community and Public Sector Union secretary Karen Batt said mandating was not the priority “given supply issues in most areas”.

The Victorian Chamber of Commerce and Industry, which represents businesses in the state, also stopped short of backing mandated vaccines, while acknowledging vaccines were “the greatest weapon in our arsenal in the fight against coronavirus”.

“National cabinet has not mandated COVID-19 vaccinations for workers outside of the aged care sector, so it continues to be an individual choice for most Victorians,” said chief executive Paul Guerra, who stressed immunisation was “the path out of lockdowns”.