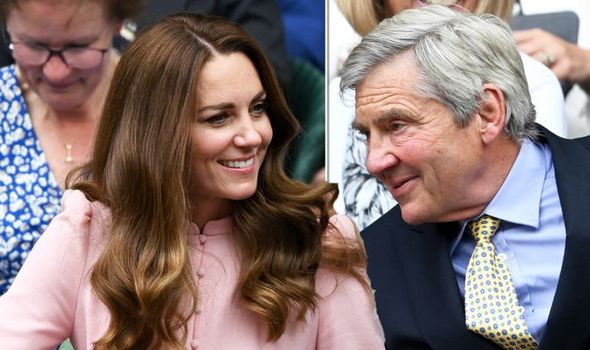 Kate and her father looked happy as they watched tennis together at Wimbledon. The Duchess often attends the sport event with her husband Prince William or sister Pippa.

Body language expert Darren Stanton, also known as “the human lie detector”, analysed the images of the Duchess and her father for Express.co.uk.

The pair attended day 13 of the Wimbledon 2021 Championships.

He started his career as a flight dispatcher, someone who plans flight paths.

Later he and his wife, Carole, founded Party Pieces, a party supply company.

Michael has modest beginnings compared to Kate’s father-in-law Prince Charles, but he was born into wealth and was distantly related to the British aristocracy. He attended public school, going to Clifton College.

The businessman enjoyed a day at Wimbledon with his royal daughter, the pair smiling and laughing together.

He went on: “However, it’s clear that everybody is thoroughly enjoying being in Wimbledon and the surroundings.”

The expert commented on the rare photos of Kate sat with her father Michael, who worked as groundcrew for BA when he met her mother, also a member of the ground crew.

He said: “The fact she’s leaning in denotes that she has a great relationship with him and it’s in deep rapport.”

The Duchess is “flashing a genuine smile” as her father “is clearly enjoying the discussion”.

Darren explained: “We can tell is a genuine smile because the whole face is engaged as opposed to when someone is masking another emotion and the face muscles that denote a smile are not engaged.

“This is clearly a nice moment.”

Kate Middleton wore a gorgeous pink dress for the occasion.

She wore a chic dress from Beulah London, which cost £695.

Kate paired the look with a pair of nude heels – thought to be the Nicholes court shoes from Aldo.

Kate’s father Michael has two other children. They are Pippa Middleton, who is married to billionaire James Matthews, and James Middleton.