Not so magical after all: Former Disney princess reveals what it’s REALLY like to work at the theme park, saying she developed an eating disorder and had ‘creepy dads’ slip her their room keys when she was dressed as Tinkerbell

A former Disney princess is lifting the lid on what it is really like to work as a theme park character, recalling how ‘creepy dads’ would hit on her while she was dressed up in costume and how the pressure to look more like Ariel from The Little Mermaid led her to develop an eating disorder.

Sarah Daniels, 32, from Florida, has more than 65,000 followers on her TikTok account, where she fields questions from fans who want to know everything about the nearly 12 years she spent with the company.

The performer, who is now a gamer and musical-theater actor, went viral last week after sharing a video detailing how men would come on to her and slip her their rooms keys when she was dressed as Tinker Bell. 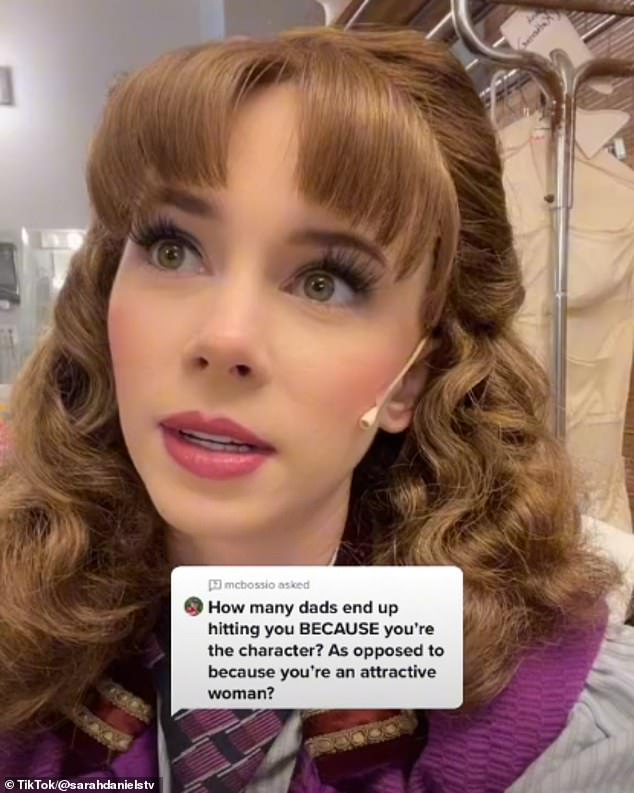 Say what? Sarah Daniels, 32, from Florida, opened up on TikTok about the ‘creepy dads’ who would hit on her while she was working as a Disney princess 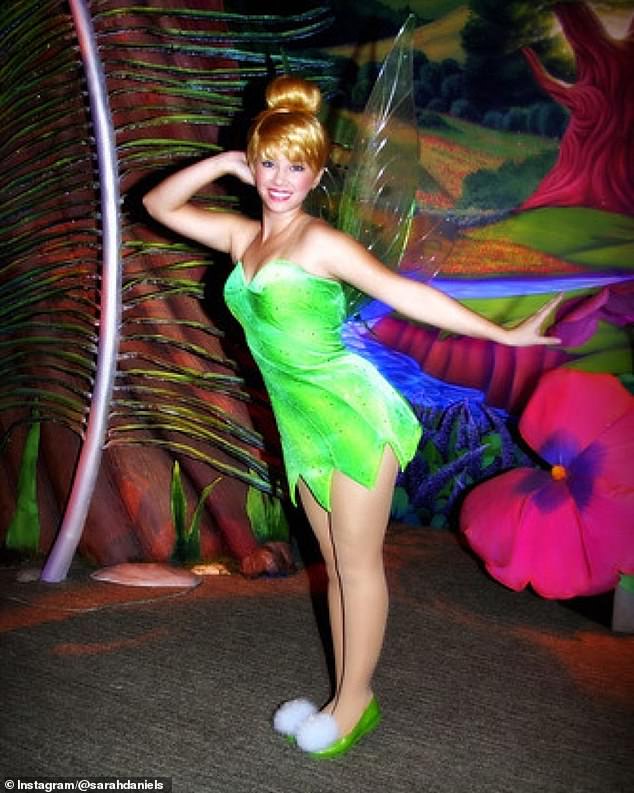 Wild: She recalled how married men would hand her their keys to their hotel rooms, particularly when she was dressed as Tinkerbell

‘I feel like if dudes are going to be creeps and hit on you, they’re going to hit on you whether or not you’re a character or not,’ said Daniels, who started working as a cast member at Walt Disney World in Florida when she was 16.

‘But there were many moments, especially as Tinker Bell, where I had married men hand me keys to their hotel room and tell me where they were staying.’

In a follow-up video, she explained how she handled the dads without breaking character, admitting she was ‘always caught off guard’ when men would do this.

‘You’re not supposed to say no, just straight up. As a face character, no is not in your vocabulary. You have to find ways around no,’ she said, giving an example of how she would respond to someone who asked her to fly as Tinkerbell.

‘Well, Fairy Mary wouldn’t like it because then I wouldn’t have enough pixie dust to get back to the mainland, blah, blah, blah. Stuff like that.’

Usually, when she was having an issue, she would ‘divert the attention to the character attendant, and they will take care of the creepy dads for you.’

Daniels’ followers seem to be particularly interested in the characters’ costumes, including whether or not they smelled.

‘So many people ask this question,’ she said in a recent video. ‘No, they’re washed. You don’t put one on after someone else has worn it. Everything gets washed. The heads get sprayed. Everything gets cleaned. So, no, typically things don’t smell, and if they do smell, you just go pick a different one.’

As to whether or not they are heavy, she said it really depends on the costume because some are more cumbersome than others.

‘A lot of princesses have some issues with the skirts being super duper heavy or really heavy wigs, like Rapunzel,’ she said. ‘I know a lot of friends who have had injuries from those specific wigs and costumes.’ 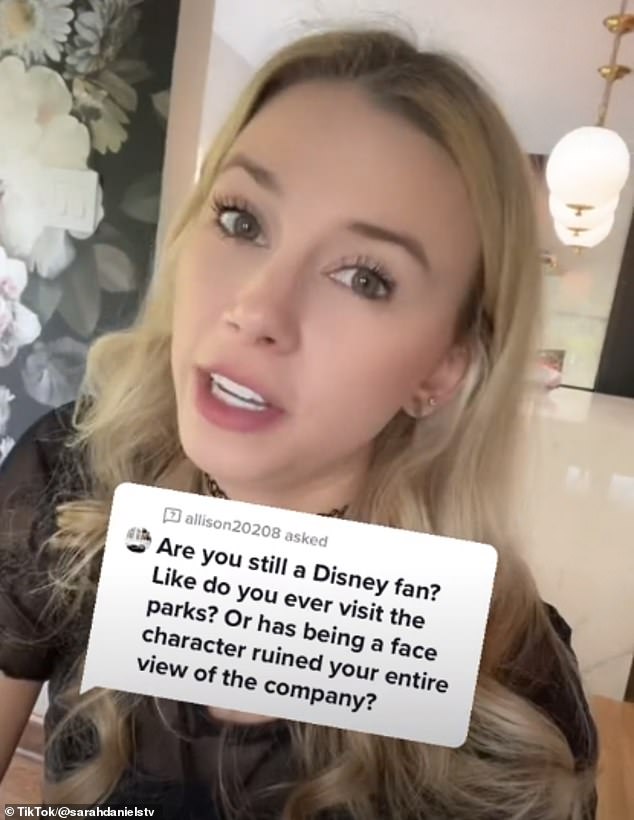 Looking back: Daniels has been candid about the nine-year eating disorder she developed after being cast as Ariel in Voyage of the Little Mermaid show 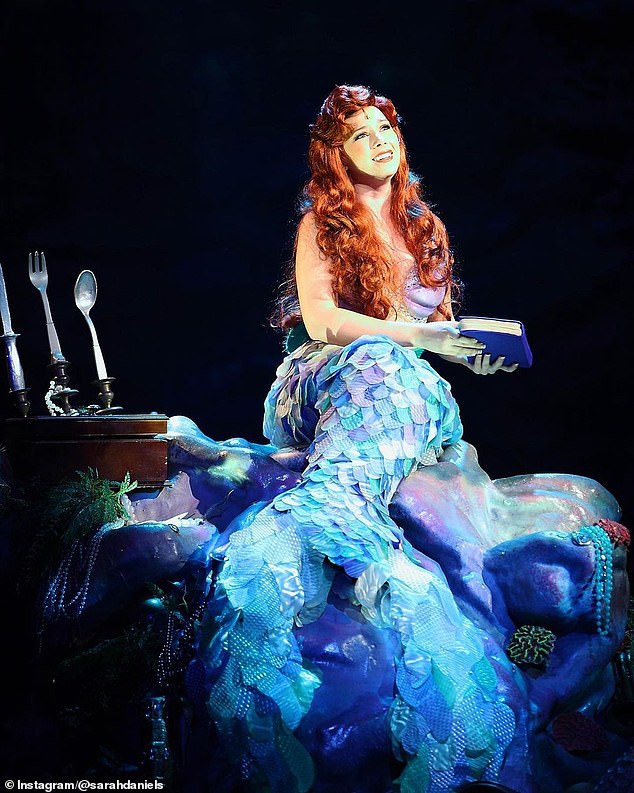 Outage: ‘What ruined my impression of Disney was when I weighed 115 pounds, and I was told my silhouette didn’t match Ariel’s,’ she recalled in one video

What performers wear under their costumes was another point of interest, but that also depends on what character the person is playing. Daniels has taken on the roles of Ariel, Alice from Alice and Wonderland, and both Wendy and Tinkerbell from Peter Pan.

She said face characters — cast members who have costumes that show their faces — typically get to wear whatever they feel like under their work clothes, but Disney princesses are all required to wear bloomers and tights.

Daniels explained that most characters are provided ‘basics,’ which are gray T-shirts and black shorts with barcodes on them (so they can be scanned out).

‘Basics are what people typically wear, and you would bring a few of them because, you know, you typically sweat through shirts during the day,’ she said.

Characters sweating in their costumes in the oppressive Orlando heat is definitely one factor that has contributed to the assumption that the costumes smell. Passing out is a real concern, and Daniels said characters have their very own distress signal. 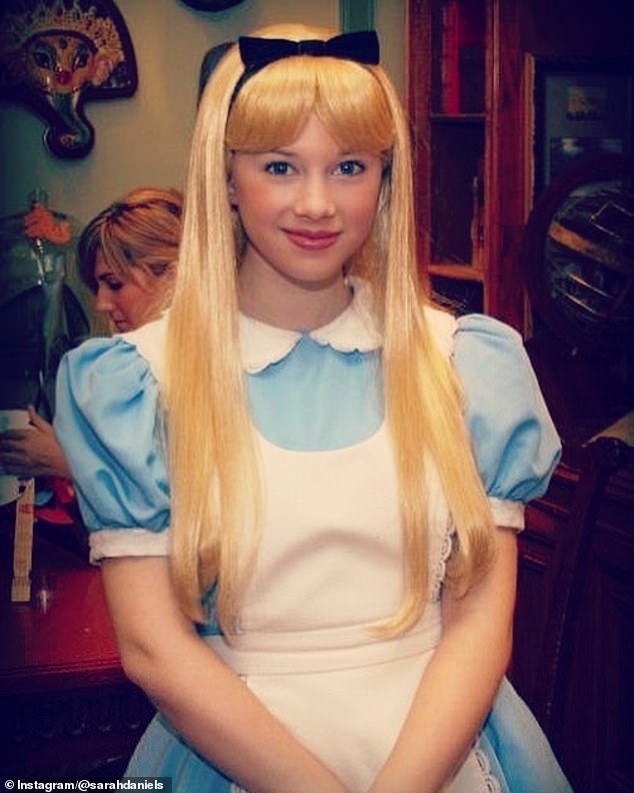 Disney past: The musical theater actor has also taken on the roles of Alice from Alice and Wonderland (pictured) and both Wendy and Tinkerbell from Peter Pan 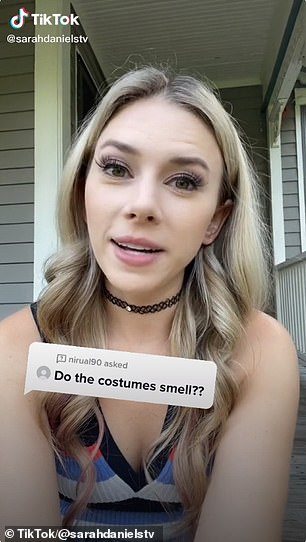 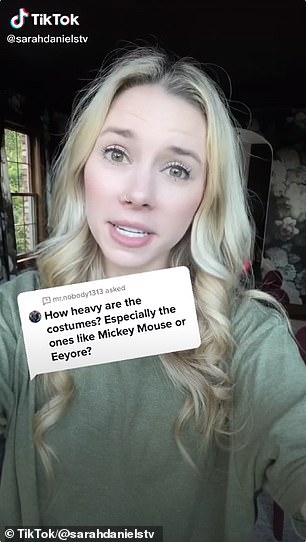 Answering questions: The former Disney princess insisted the costumes are washed and do not smell, but some are a lot heavier than others

‘If you’re having trouble and you need to go, you put one hand over one eye and then put the other hand in the air, and that’s how they know that you are having trouble,’ she shared in one clip.

Daniels has been open about her favorite character to play and how much she loved bringing joy to families, but the positives didn’t outweigh the mental anguish she suffered.

In a 2019 interview with the Indianapolis’s Star, she detailed how she developed a nearly decade-long eating disorder after being told to slim down to play Ariel in the Voyage of the Little Mermaid show.

‘What ruined my impression of Disney was when I weighed 115 pounds, and I was told my silhouette didn’t match Ariel’s after they had already put me through rehearsal for the show,’ she recalled in a recent video.

Daniels said the experience ‘launched me into a nine-year eating disorder that cost me thousands in therapy.’ 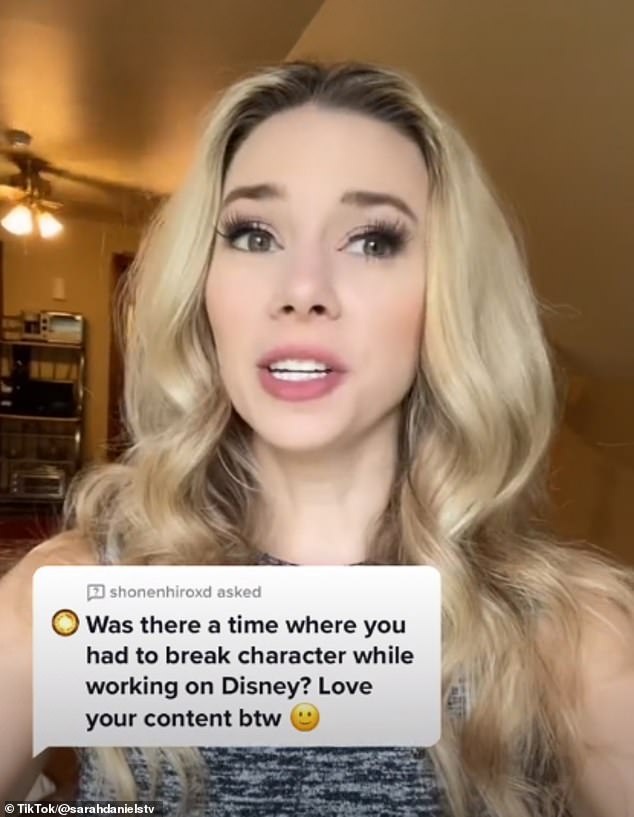 Don’t even try it: Daniels warned that cast members aren’t allowed to break character and will lose their jobs if they do 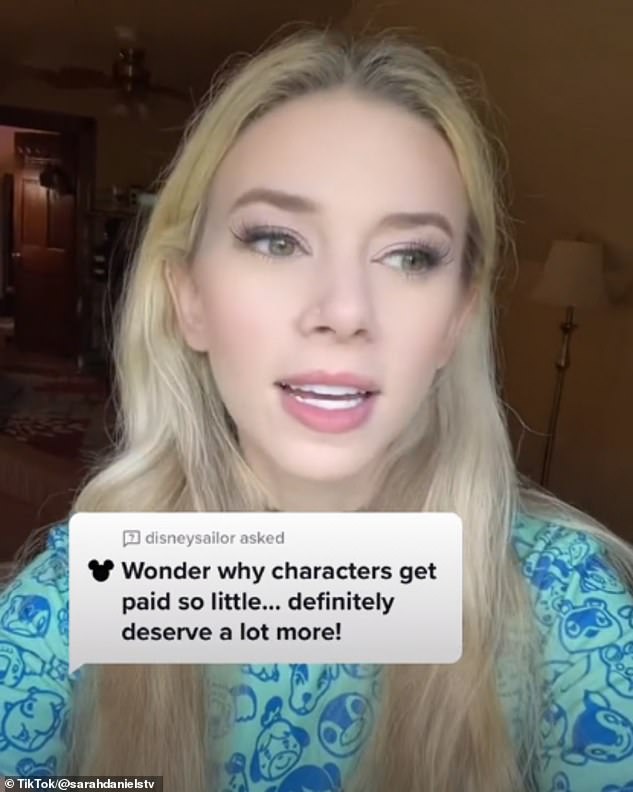 Keeping it real: Daniels believes Disney can get away with paying low wages because there will always be a young woman who wants to play a princess

‘I’m just turning 32 this year and I finally have an OK relationship with food and my body — I am saying OK, not great,’ she added.

Daniels has also shared her thoughts on the low pay, which she doesn’t see getting much higher any time soon.

Characters at the theme park only make somewhere between $11 and $20 per hour, but there is still a great demand to be a Disney princess.

‘There are many women around the world who want to be a Disney princess. You can see that by just the views on my videos on TikTok,’ she said. ‘I haven’t worked at Disney in a really long time, and people are still really interested in hearing about what it’s like to work there.

‘So, I think that because so many women will do the job, they don’t need to pay more money, if that makes sense. They’re like, “Well, there’s always some 16-year-old girl who’s gonna want to do this.