Viewers were left in tears by BBC’s DIY:SOS last night after the team helped a father who revealed how his 31-year-old daughter tragically died weeks before filming for the show began – while his wife and other daughter both suffer from the same condition.

Former car mechanic Peter Chapman, 60, from Charlton Kings, near Cheltenham, explained how he now acts as a 24/7 carer for his wife Sarah, 55, and their daughter Suzanne, 35, who both suffer from a long-term genetic condition called myotonic dystrophy.

The inherited condition causes their muscles to progressively waste away and can cause cataracts, intellectual disability and heart conduction problems – and there is currently no cure.

Meanwhile he also revealed how the family had only recently been rocked by tragedy after his younger daughter Margaret, 31, who suffered the same condition, died weeks before filming began.

At the end of the programme, the family were blown away by the transformation – but confessed their late daughter was never far from their thoughts.

In an emotional speech, Peter said: ‘When these guys firts came to see us, Margaret was with us. And everything was going to be for her, and our two girls, and she caught a cold. Just a cold. And she didn’t make it. But I know, she has been watching over us.

‘When you wake up in the morning and look in the mirror, you are all beautiful, lovely people and I love you so much. Thankyou so much. I will never forget this.’ 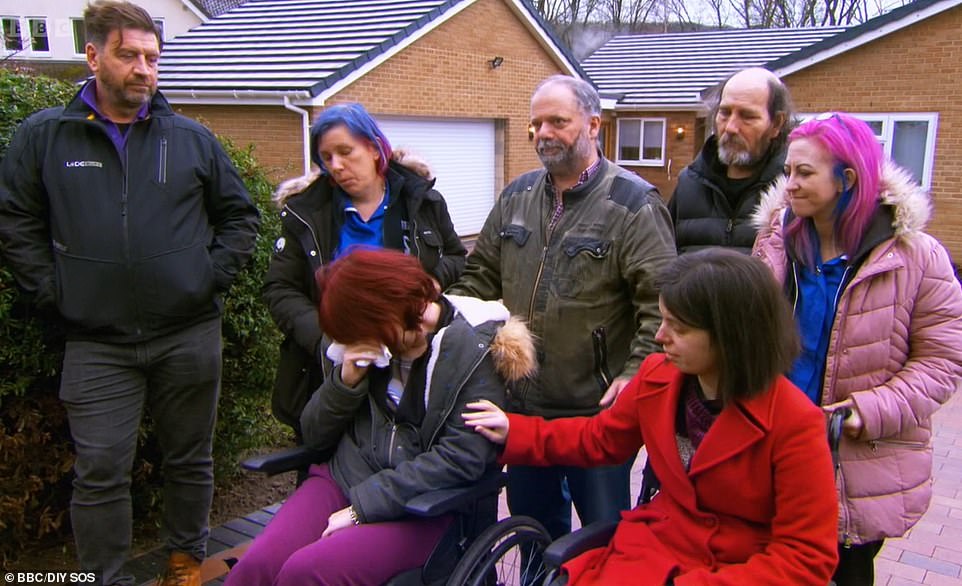 Viewers were left in tears by BBC’s DIY:SOS last night after the team helped a father who revealed how his 31-year-old daughter tragically died weeks before filming for the show began – while his wife and other daughter both suffer from the same condition 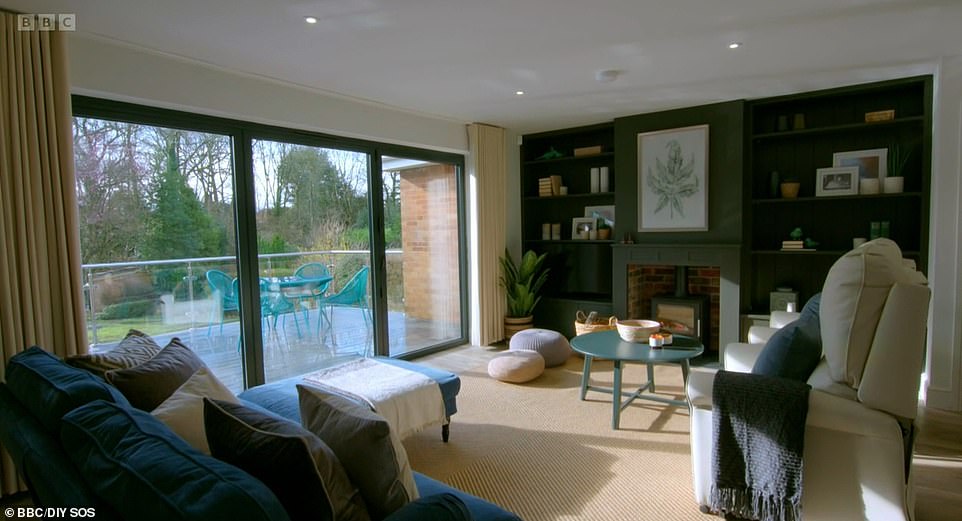 At the end of the programme, the family were blown away by the transformation – which saw their bungalow home renovated into a stunning open plan space 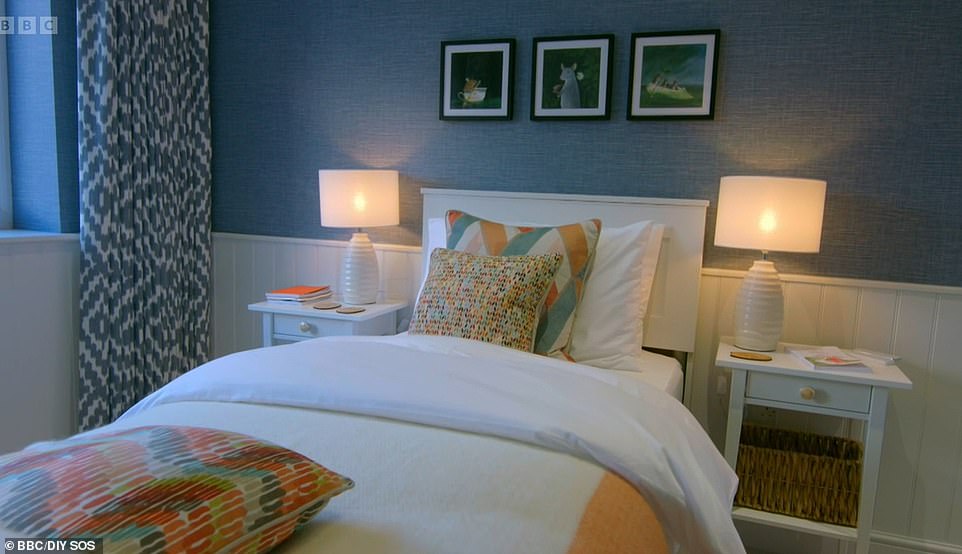 Meanwhile Peter’s daughter Suzanne was giving her own magical themed bedroom for the first time in her life, weeks after her sister passed away

Appearing in the episode Peter explained how the family initially learned of their health issues, saying: ‘Margaret was two months premature, there was no facial expression.

‘It was only then they were looking for something- and they turned their attention to Sarah, to see if anything was wrong with her.’

That’s when doctors confirmed the heartbreaking news – that Sarah, Suzanne and Margaret all had the same condition.

Peter said: ‘At first I wasn’t frightened of it because I didn’t know what it was. But as time went on, we realised it wasn’t going to go away and it was just going to get worse – and it did.’ 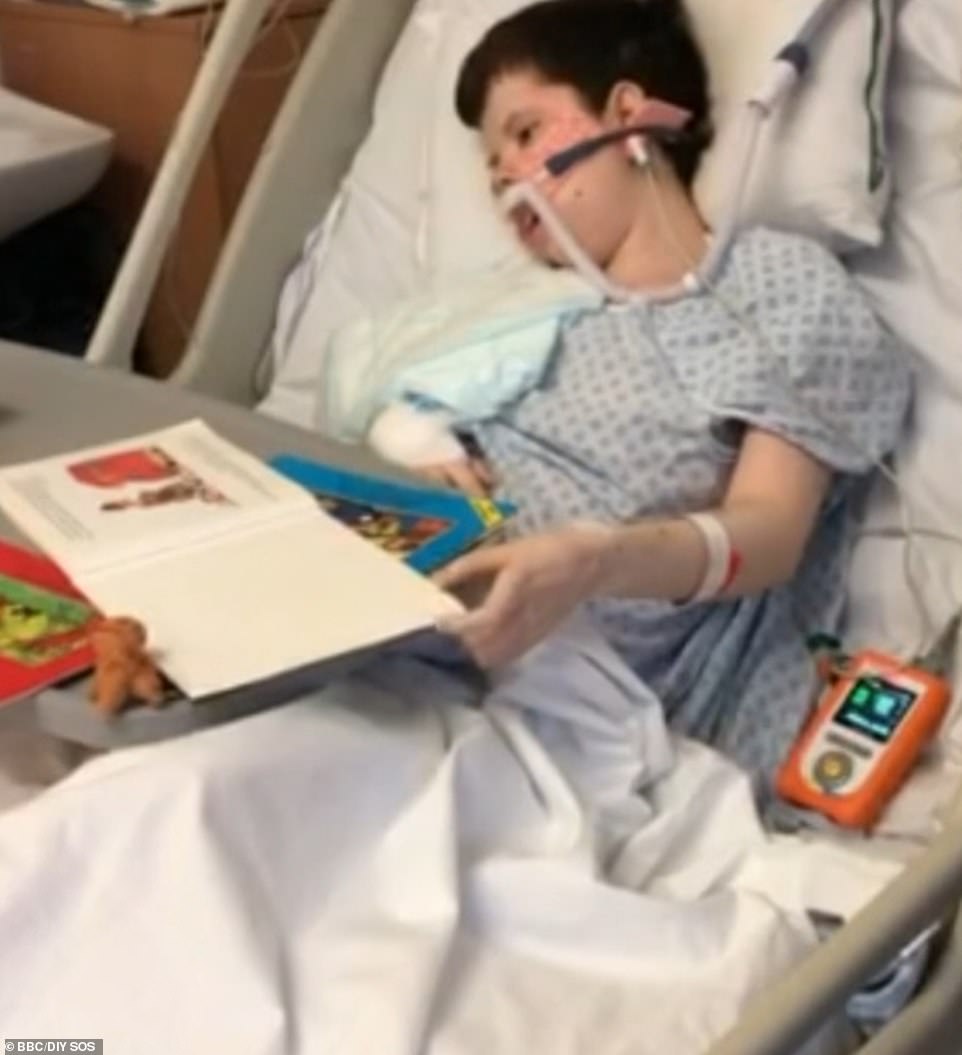 During the show, Peter revealed how the family had only recently been rocked by tragedy after his younger daughter Margaret, 31,  died weeks before filming began

From that day on, all three began to lose use of their muscles.

WHAT IS MYOTONIC DYSTROPHY?

People with myotonic dystrophy experience muscle weakness and wasting which is usually progressive.

Types of muscles involved are usually in the face, jaw and neck area; the large, weightbearing muscles of the legs and thighs are much less affected.

Rate of deterioration is commonly slow, with little change over a long period; some people never have significant muscle disability.

Muscle stiffness or ‘myotonia’ is characteristic, especially affecting the hands.

Involvement of other body systems is frequent; associated problems may include cataracts, disturbance of heart rhythm, hormonal problems and, in children, learning difficulties.

Sarah said: ‘You don’t think you’re not going to be able to use your hands or walk.’

Peter explained how he now spends 24 hours a day caring for his partner Sarah, who has the early stages of the condition, and so is only able to walk short distances with the aid of a walking frame.

Meanwhile he also cares for their daughter Suzanne who, as well as having the genetic condition, has mental age of 12.

Inspiringly, she works a couple of mornings a week in the nursery she attended as an infant.

And because Peter’s mother also died a few years ago, he and Sarah also took in his autistic brother Steve, 64, who works part-time at a local launderette.

Due to his family’s extensive care needs and determined to provide an accessible home for his loved-ones, Pete found a bungalow for them to move into four-years-ago.

However it had a multitude of problems, with Peter slowly beginning to renovate the property.

And as the health of Suzanne and Sarah deteriorated, and Steve’s needs expanded, Peter found he was unable to finish the work on their home.

Peter said: ‘It got to the  point where I realised, I can’t do this on my own. I tried, I really did try.’

Suzanne added: ‘My dads a big part of this family. He’s the one who keeps the family together, like glue.’

He was in the middle of building an extension when he ran out of money to complete his work.

And the family was further rocked by tragedy after Peter was also diagnosed with his own health struggle – with doctors informing him he has  fibromyalgia. 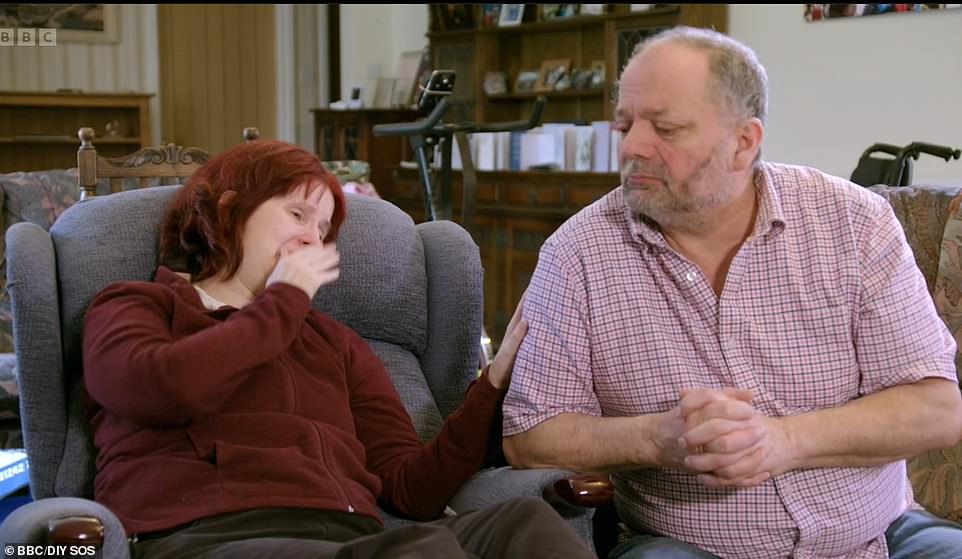 Peter and his wife Sarah, 55, described the pain of being diagnosed with the debilitating condition, as well as their grief over the loss of their daughter 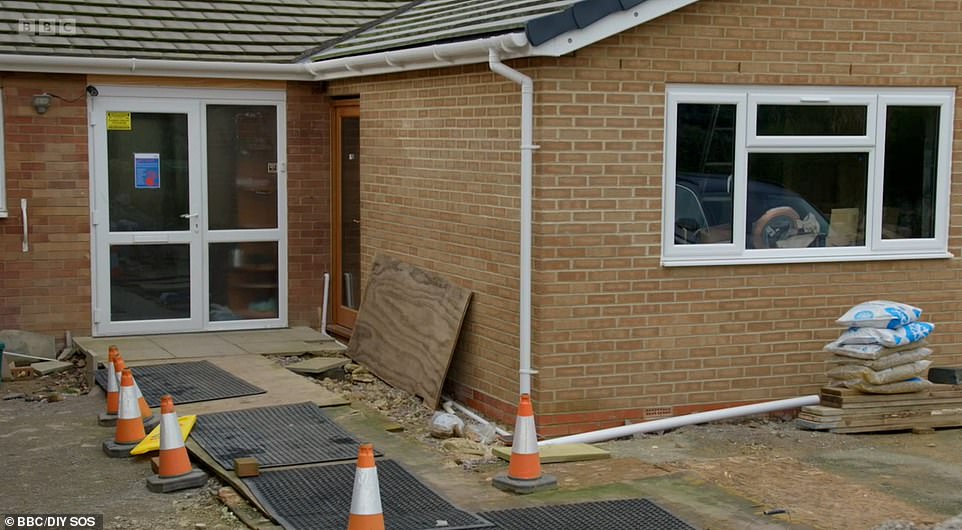 At the start of the programme, the former car mechanic also explained how he had bought a bungalow four years ago for his family – but had struggled to adapt it for their growing needs 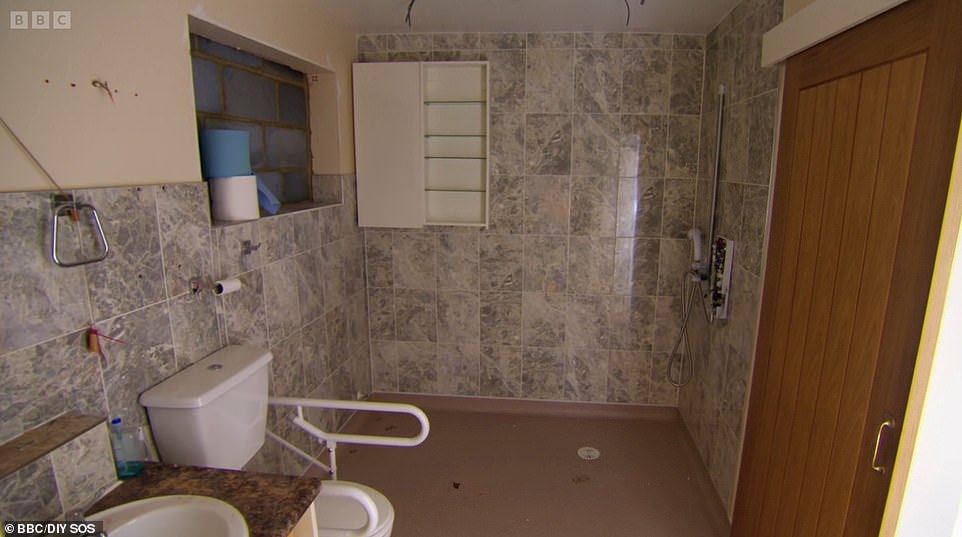 Peter explained how he had hoped he could renovate the space himself to make it appropriate for his family’s health needs (pictured, one of the bathrooms) 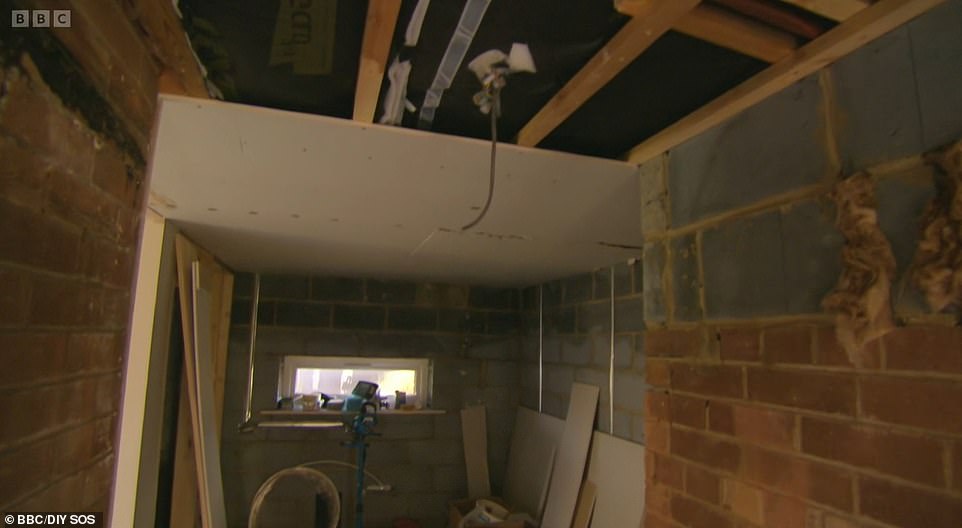 However after the 60-year-old ran out of money and was himself diagnosed with fibromyalgia, his renovations on the property came to a halt

Fibromyalgia is a chronic condition defined by widespread pain and fatigue.

It affects up to 2.7 per cent of people worldwide, with three women suffering for every one man, studies suggest.

Fibromyalgia is often triggered by a trauma, such as a car accident or childbirth, as well as infections. Why this occurs is unclear.

The discomfort tends to be felt as aches and burning from head-to-toe.

And the fatigue ranges from feeling sleepy to the exhaustion of having the flu.

Severe sufferers are often unable to work or socialise.

The pain can be worse at some times than others and may change location, such as becoming more severe in parts of the body that are used the most.

Other symptoms can include headaches; IBS; diarrhoea or constipation; poor concentration; dizziness; allergies and stimuli sensitivity, such as to light or heat.

Studies suggest the average patient waits five years to be diagnosed, which is thought to be due to X-rays and other medical tests not picking the condition up.

It is generally defined as pain that lasts for more than three months and affects 11 or more out of 18 tender points when pressed.

Up to three million people in the UK have fibromyalgia, which causes widespread and increased sensitivity to pain, along with muscle stiffness, difficulty sleeping, headaches, depression and problems with memory and concentration, known as ‘fibro-fog’.

The cause of the condition is not known, although abnormally high levels of the chemical glutamate, which alters the way the brain processes pain messages, are thought to be implicated.

In many cases, fibromyalgia appears to be triggered by a physical or stressful event, such as an infection, accident or bereavement.

Peter explained:  ‘As time went on, we realised it was going to get worse. And it did.’

Sarah confessed it would mean ‘everything’ to the family if the DIY SOS team could help with their home transformation.

Meanwhile Peter, who confessed he felt he’d been fighting on his own for a long time, described it as ‘unbelievable’ that they’d be able to help.

The DIY SOS team arrived at the home in February 2020 to find the house swamped by specialist equipment for all the family’s health needs.

Meanwhile, with multiple family members using wheelchairs, it was becoming more and more difficult to navigate the layout and narrow doorways.

And the house is never empty, with care assistants coming in each day to assist various family members.

Presenter Nick Knowles lead the DIY: SOS team of volunteers in fixing problems which Peter had tried to fix himself over the years, including a leaky roof.

Meanwhile the electrics also needed sorting and the team set about making the garden more accessible for the wheelchairs.

But tragically, after all the family’s misfortune, problems arise when the Big Build is put in jeopardy due to Storm Dennis.

As the building site was battered by wind and rain, the team questioned if it would be possible to carry on.

However, despite the problems with the weather, the team were able to completely transform the Chapman home.

They gave Suzanne her own bedroom, catered for her specific needs, which had been decorated with a nod to her love of  magical literature.

Meanwhile the family’s kitchen and bathroom were made open plan to help accessibility, while Margaret’s old bedroom was turned into a physio hub.

Sarah told Nick she wished her daughter could have seen the transformation, adding: ‘I don’t think that thank you is going to cover it.’

And Peter called the transformation ‘unbelievable’, adding that it would make ‘a huge difference’ to their lives.

Many viewers confessed the emotional episode had left them in floods of tears. 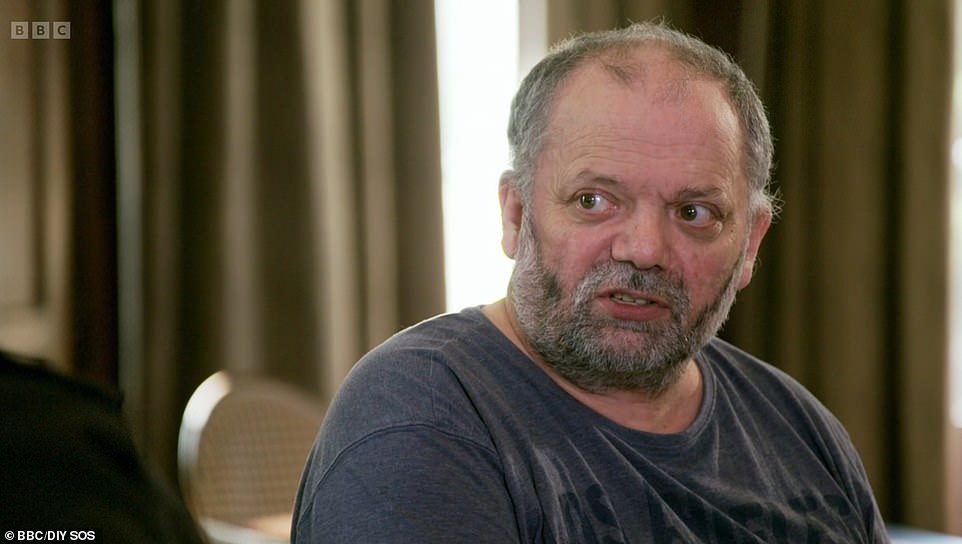 Peter was emotional throughout the programme, telling Nick how he spent 24 hours a day caring for his family and building their home

After facing challenges due to Storm Dennis, the DIY SOS team were able to transform the bungalow into a stunning family home, with a new accessible driveway 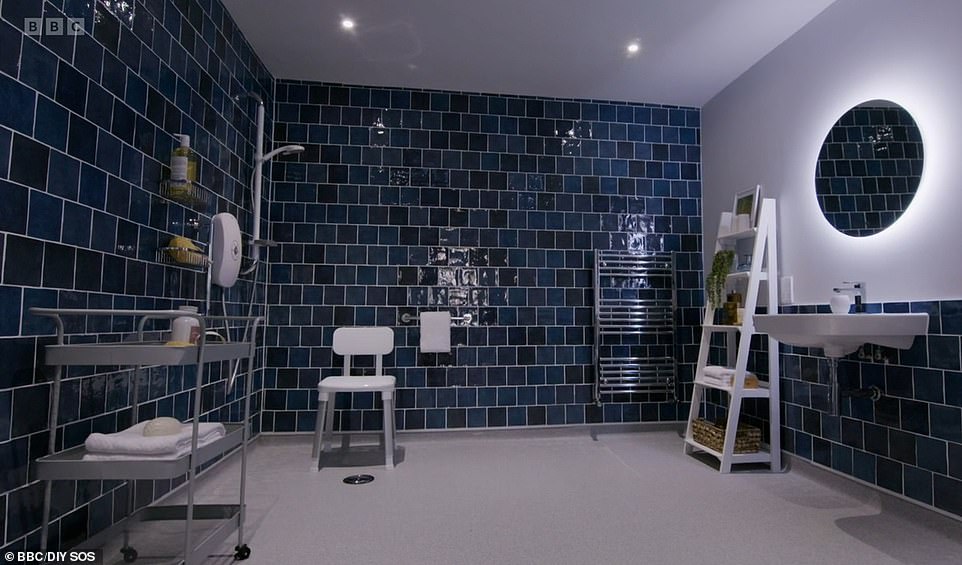 The bathroom was renovated into an accessible space for Suzanne and Sarah, both of whom use wheelchairs, while still appearing trendy 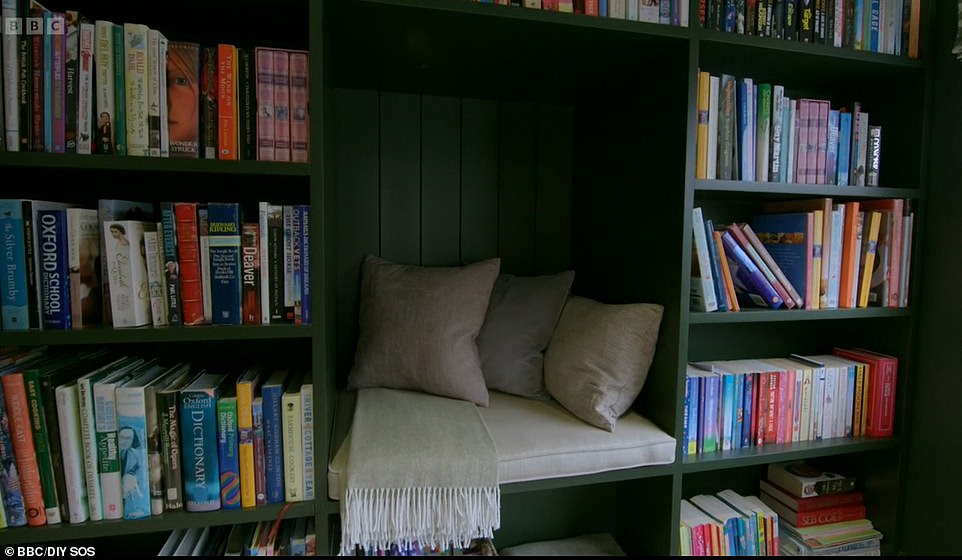 Meanwhile the DIY SOS team also built a reading nook for Suzanne, and said they hoped she would snuggle up in the space with a book 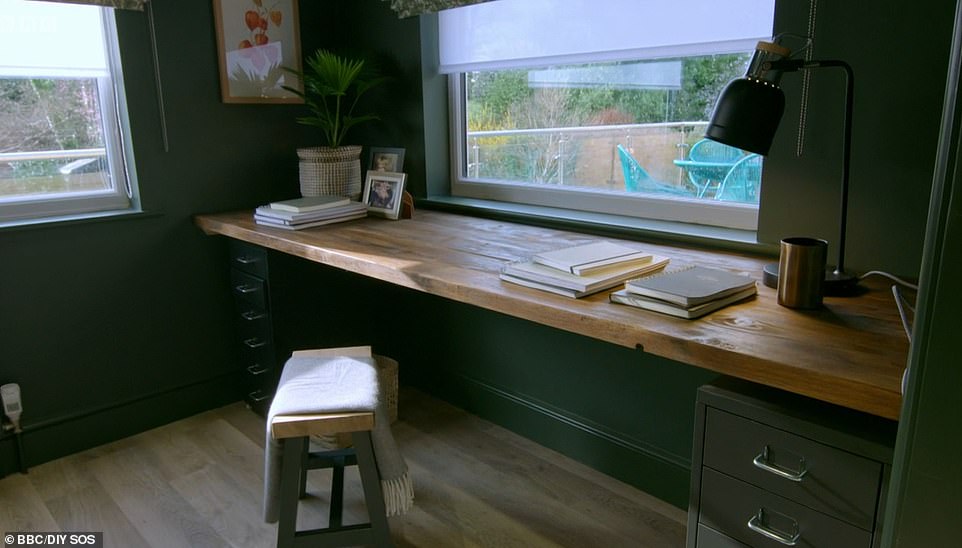 Among the changes they made to the house was building a study space for the family off the open-plan living area, which was also wheelchair accessible (pictured)

One person wrote: ‘Ran out of hankies watching #DIYSOS tonight. All those lovely volunteers turning out to help Pete and his family. Big hearts, every one of them.’

Meanwhile another commented: ‘Catching up with DIY SOS – bloody hell.

‘So many families going about their daily struggles behind the scenes, while others like me are in the position to take a lot of things for granted. Must be so difficult.’

A third added: ‘Jesus how can one family have so much bad luck. Three of them with that awful disease which one has died from, and the brother with autism. 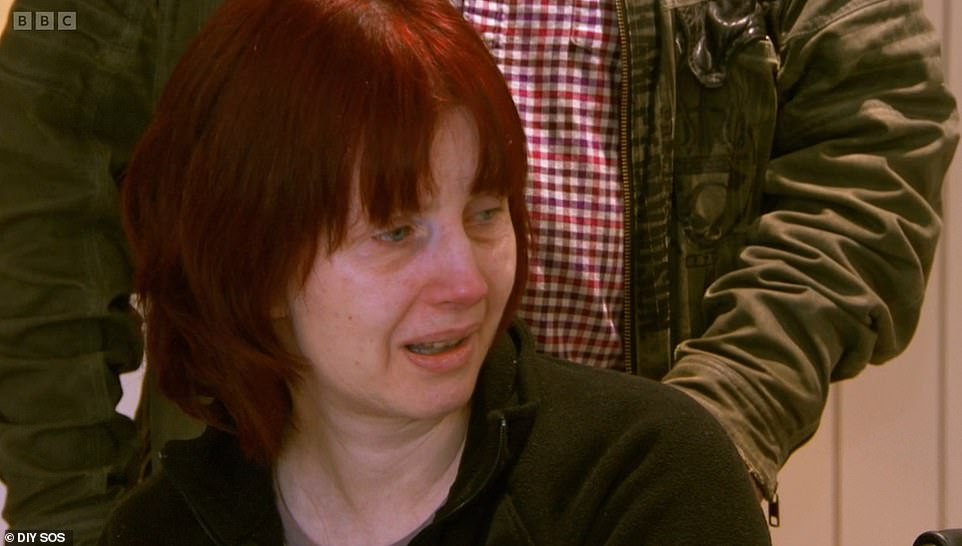 Meanwhile Peter’s wife was left in floods of tears during the programme, and confessed she wished their daughter Margaret could see the transformation

Another wrote: ‘Does anyone else bawl their eyes out at DIY SOS? I absolutely love it. The good of the community and the builders and suppliers is second to none. The families are so appreciative of them, it’s amazing.’

‘DIY SOS and the team of amazing people behind it. Be proud…incredibly proud.’ 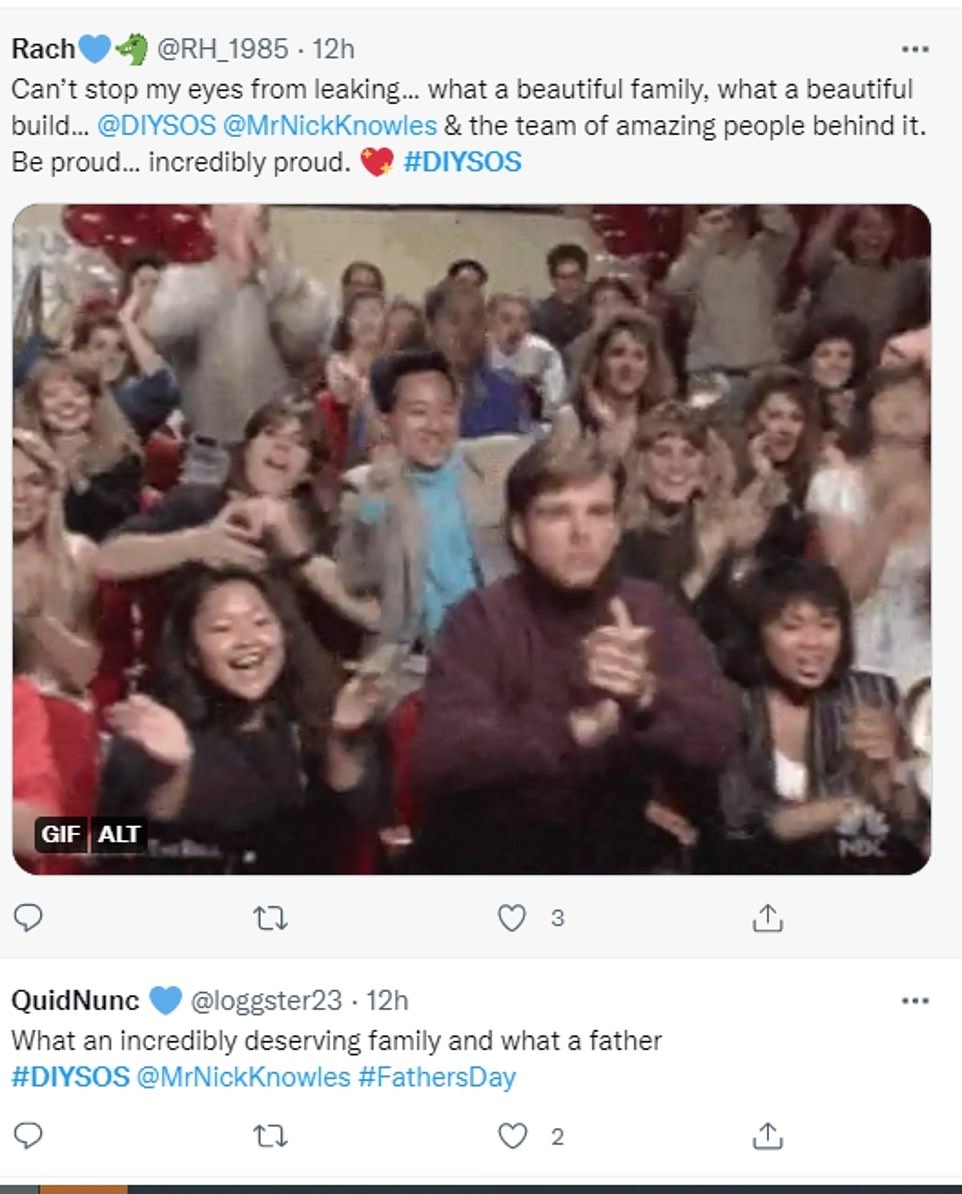 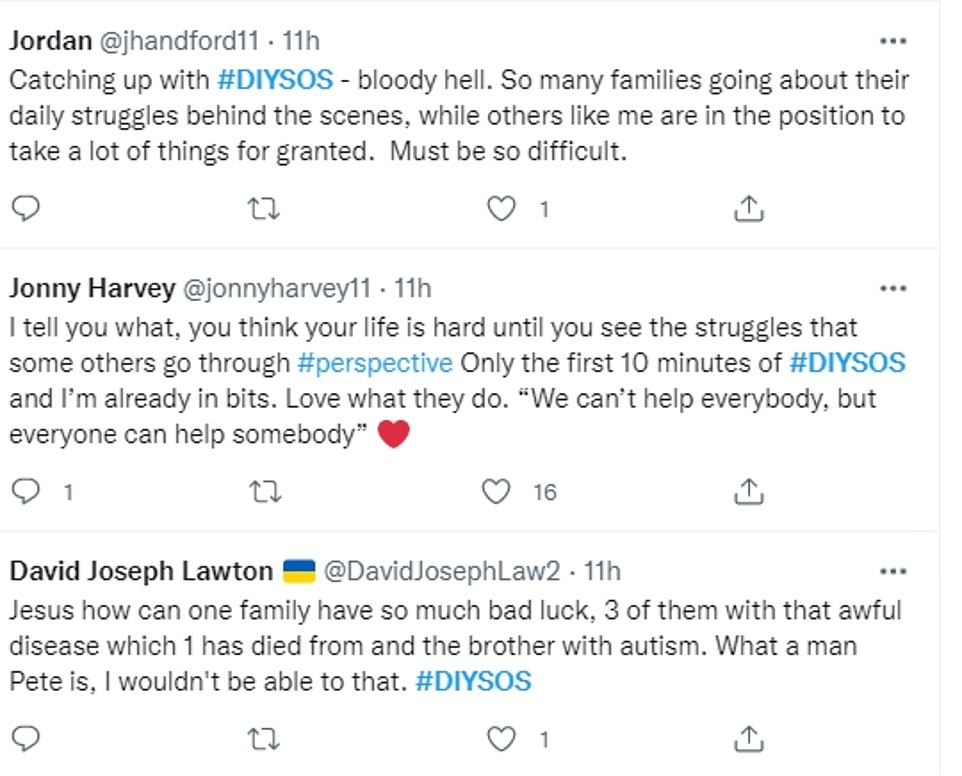 Many viewers confessed the emotional episode had left them in floods of tears, with one even saying they had ‘run out of hankies’