‘Doctor Who’ new animated special based on 1968 episode 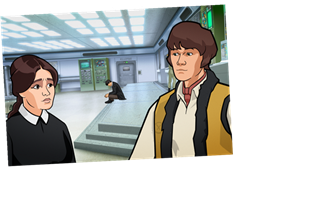 Sentient, parasitic seaweed is on the loose in “Fury From the Deep,” a newly-animated special based on a six-episode arc from the BBC’s classic series “Doctor Who.”

The original live-action version of “Fury from the Deep” aired in 1968 and starred Patrick Troughton as the second Doctor. This animated series is the latest in the BBC’s impressive resurrection of “Who” episodes lost to the network’s old practice of erasing videotapes after the shows first aired.

Thankfully, Australian censors cut clips from the the original “Fury From the Deep” episodes and held onto them, providing minor surviving video footage; a complete audio recording exists, which made it possible to animate the entire thing.

In the episodes, the Doctor and his companions Jamie (Frazer Hines) and Victoria (Deborah Watling) touch down at an ocean-based natural-gas refinery that’s having strange problems — particularly with what sounds like a heartbeat coming from the underwater pipes. “Who” has always loved the scenario of a sinister invasion at an industrial base. More broadly, all the elements of a good sci-fi thriller are here: the initial, ominous glimpses of a metastasizing monster; the domineering boss, Robson (Victor Maddern) who refuses to accept that anything out of the ordinary is happening; and the poor souls overtaken before anyone else notices the crisis.

It’s the latter case that provides one of the scenes the Aussies deemed too much for viewers. In it, jump-suited lackeys named Mr. Oak (John Gill) and Mr. Quill (Bill Burridge), zombified by the villainous weed, attack a scientist’s wife (June Murphy) by breathing a toxic gas at her. The original clip is genuinely unsettling, especially Burridge, whose gaping, bug-eyed face wouldn’t be out of place on Creepypasta. The animated Oak and Quill are more like Scooby-Doo baddies.

If you are, like me, not well-versed in the oldest Doctors, this is a fun primer; “Who” completists will surely enjoy seeing Troughton come to life in the miniseries’ retro animation style. In this early incarnation, the Doctor is less commanding and eccentric than he — and she — would become, but there are glimpses of the character’s mischievous streak as he assures a worried Victoria that getting into life-threatening scrapes is “the spice of life” and tries his hand at flying a helicopter. The enduring, all-purpose sonic screwdriver apparently makes its first appearance here, too; the Doctor uses it to, well, unscrew screws. But with sound waves!

This series also features a plaintive question that’ll be posed by other companions down the line: “Why can’t we go anywhere pleasant?” Watling’s Victoria, who keeps getting shunted off into side rooms by the men when she’s not shrieking helplessly in the face of danger, seems like she’s got a fair point. It’s also noted, and not for the last time, that given the availability of all of time and space, it’s funny how often the Doctor’s TARDIS seems to end up in current-day England.

“Fury From the Deep” can get a little bogged down in repetitive, time-padding dialogue. I lost count of how many times Robson yells at his underlings and the Doctor that he’s in charge and business must go on as usual. Once it gets cooking, though, the serial embraces a great campy vibe, and the animation allows for a more visually dramatic final act. I felt a little pang for the trappings of vintage live-action “Who” — all those wobbly creatures made with tinfoil and wire — but it’s an enjoyable time (and space) capsule all the same.