Dolphin rescued after ‘seafood feast’ in nets in Sydney’s south

An operation in Sydney’s south has successfully rescued a bottlenose dolphin that has been swimming inside nets at Ramsgate Beach since Thursday.

Marine mammal rescue organisation ORRCA was at the scene alongside Bayside Council and NSW National Parks and Wildlife Service on Monday as divers cut about 20 to 30 metres off the top of the nets to encourage the dolphin to swim out of the area. 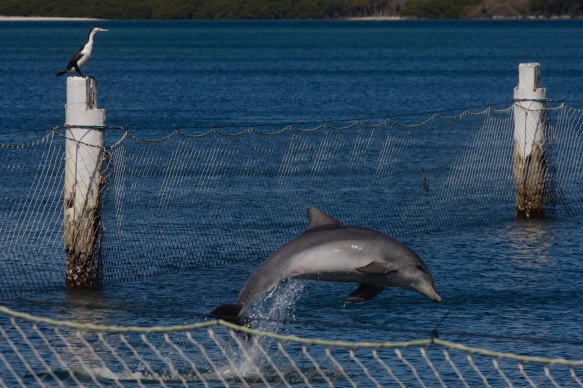 The dolphin has been in the enclosure since Thursday. Credit:Dean Sewell

The dolphin swam back out to sea before 3pm.

ORRCA spokeswoman Jools Farrell said the dolphin was not trapped but was failing to find its way out of the area, adding it was rare for dolphins to swim into nets like this.

“It was just because it was under construction, there was work being done, so there was opportunity for this dolphin to come in there and have a big seafood feast,” she said.

The major concerns for the organisation were that people might have tried to swim with the dolphin and that the animal might have become distressed if it could not find an exit. 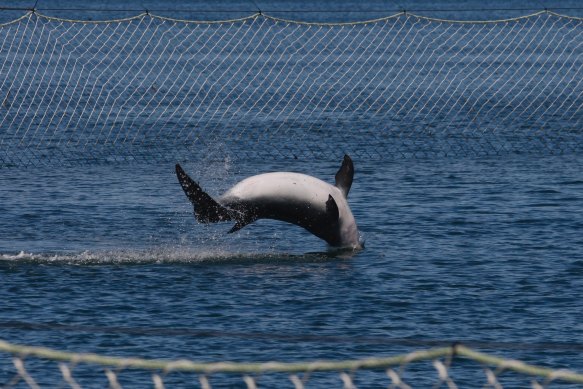 Onlookers flocked to the beach to catch a glimpse of the dolphin.Credit:Dean Sewell

“Our concern is the animal’s welfare. This dolphin is behaving normally, it’s doing all the right things, but it should not be where it is,” Farrell said before the rescue.

The net was cut in the hope the dolphin would be “comfortable enough to swim out”, she said.

Contractors were reinstalling the nets following recent storm damage when the dolphin made its way into the enclosure on Thursday. Originally, there were two dolphins within the nets but one found its way out.

Farrell said that, for the contractors to be able to finish the net installation, heavy machinery needed to be used, which “would definitely have an effect” on the dolphin, hence the desire to have it removed from the area.

The nets at the beach are designed to keep out sharks and stingrays, but allow for fish to pass through.

In a statement made to its Facebook page, Bayside Council ensured patrons the dolphins had not been trapped.

“But a word of warning from the Police, ORRCA and the NSW Department of Planning and Environment; Please DO NOT SWIM NEAR THEM OR ENTER THE WATER NEAR THEM,” the council cautioned.

“We want to keep them safe and ensure they enjoy their visit to Bayside. Please follow the expert advice, so we can all witness this magical moment.”

NSW National Parks and Wildlife Service said the dolphin was able to swim about freely while within the net.

“The NSW National Parks and Wildlife Service, ORRCA volunteers and Bayside Council are monitoring the dolphin and asking the public to please give it space,” the organisation said in a statement while the rescue was ongoing.

“The dolphin is medium-sized and in good condition. There are no immediate concerns for its welfare and we expect the dolphin will make its own way out of the enclosure when ready.”

A guide to the environment, what’s happening to it, what’s being done about it and what it means for the future. Sign up to our fortnightly Clear Air newsletter here.