Attorney-General Mark Dreyfus has conceded a referral from him to the government’s slated integrity commission would be treated differently than one that came from a member of the public.

Dreyfus said he would expect the National Anti-Corruption Commission to treat a referral from a minister or departmental head “very seriously” because of its source, but stressed he wanted all “complaints of substance” to be given clout. 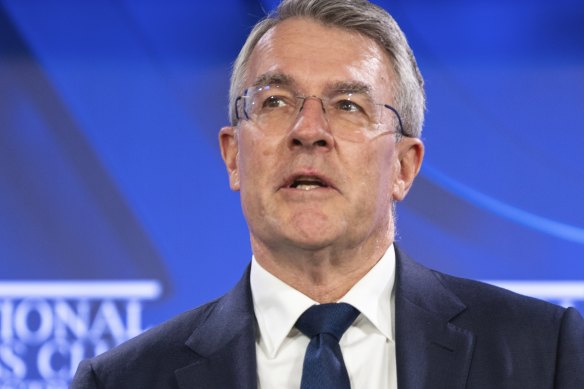 Attorney-General Mark Dreyfus said he would expect the integrity commission to take a referral from a minister or senior bureaucrat seriously.Credit:Alex Ellinghausen

Dreyfus also said the commission would be able to exchange information confidentially with state anti-corruption commissions, and with state-based police forces and ombudsmen.

Ahead of the introduction of the bill to establish the watchdog in September, Dreyfus said it would be inappropriate for him as the minister responsible for the commission to be making referrals to it, stressing on multiple occasions since then that any member of the public could make referrals.

During a Monash University law faculty forum on Thursday, broadcaster Jon Faine put to Dreyfus that a referral from an anonymous member of the public was not the same as a referral from the Attorney-General of Australia, to which Dreyfus replied, “I’d accept that.”

But he said ministers or departmental secretaries were obliged to make referrals under the bill if they became aware of serious or systemic corruption.

Independent MP Allegra Spender, who campaigned on integrity during the federal election, said Dreyfus’s comments reopened debate about the independence of the referrals process ahead of the publication of a Senate committee’s report on the bill this coming Thursday.

“His point is, whether it’s explicit or implicit, there will always be weight [carried by] senior members of government in terms of making referrals,” Spender said.

She said it was crucial for the parliamentary committee charged with overseeing the watchdog to be genuinely impartial, by reflecting the broad makeup of parliament, so the government couldn’t simply rubber stamp the appointments of the commissioner and deputy commissioners.

Dreyfus said he had repeatedly refused to answer questions about whether recent political scandals would be referred to avoid them being classed as hit jobs.

“It’s really important the anti-corruption commission be understood not as a partisan body, it is not there to do the bidding of the government of the day,” he said.

Centre for Public Integrity director Anthony Whealy KC, a former NSW Court of Appeal judge, said he didn’t believe a referral from the Attorney-General would be fast-tracked, however it may “raise eyebrows” in that the commission would place great scrutiny on its veracity.

“If we get the right commissioner, I don’t think he or she would at all be phased by a referral from the Attorney-General or a minister,” Whealy said.

One of the sticking points of the proposed commission is the ability for public hearings to be held only in exceptional circumstances, prompting outcry from the crossbench over secrecy.

Asked by Faine whether he was rethinking that aspect of the legislation, Dreyfus said he was going to wait to see what the inquiry found, adding he wasn’t going to commit to a decision beforehand.

He said it was important the legislation was supported by the whole parliament, and compromises would be made. “Everybody in the parliament might have to give up something in order to reach a consensus view,” he said.