Economic ‘bad cop’ time coming to an end for Chalmers

The softening-up complete, the onus is now on Treasurer Jim Chalmers to start delivering.

Chalmers’ economic update, outlining just how much has changed since his predecessor, Josh Frydenberg, delivered a rose-hued budget back in March, contained some harsh truths. 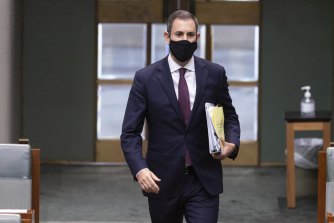 Frydenberg’s speech could be from another time. The official cash rate was 0.1 per cent, wages were expected to outpace inflation and a decent-looking iceberg lettuce didn’t require a small personal loan and a battle in the local Coles shopping aisles.

Chalmers’ update contained sizeable reductions in expected GDP, a ramp-up in inflation to a 32-year high and the revelation that wages won’t be doing better than inflation until at least 2024.

Extrapolating the wage forecasts, most Australians won’t see their real pay back to its pre-COVID level until the second half of this decade.

Chalmers, with his most ashen of ashen faces, outlined the figures and declared he and the government understood the pain facing Australians while noting it could not be turned around on a dime.

“Nine years of mess can’t be cleaned up in nine weeks – it will take time. Australians know this too,” he said.

But as his new Liberal opponent, Angus Taylor, correctly pointed out, just laying out the issues facing the economy and the budget is one thing. Dealing with them is how Chalmers and the government will be judged.

While it’s true getting all the government’s policy ducks in a row will take longer than nine weeks, that explanation is unlikely to extend to the budget in October.

It’s even more difficult for a government that went to an election promising to turn around the fall in real wages being felt by all Australians.

Yes, the Fair Work Commission okayed a 5.2 per cent increase for the lowest paid. But for the more than 13 million people who aren’t on the minimum wage, getting a real increase in take-home pay is a long way off.

The Reserve Bank has put its foot to the floor in a bid to get interest rates to a level that will take some of the inflation pressure out of the economy (and money out of the pocket of home buyers). But as Chalmers’ figures showed, that tightening of monetary policy will translate into slower growth and slightly higher unemployment.

At the budget level, the petrol excise holiday will come to an end in September. No matter what happens to oil prices between now and then, people will miss the 22.1¢-a-litre excise cut.

Further out, the low- and middle-income tax offset – currently injecting $12 billion into the pockets of about 10 million people – is ending. From July next year, no matter which way you paint it, the tax bills of those 10 million people are going up.

Chalmers has rightfully used his time since moving into the treasurer’s office to outline the situation facing the country. He and the government now have three months to craft a budget that deals with that situation.