Household and government spending will have to drive the national economy for years, with the Reserve Bank warning of a long and bumpy recovery from a recession so severe it will crimp the number of Australians moving in together and having children.

Releasing downgraded forecasts that economists say show the economy will not be strong enough to withstand an interest rate rise until at least 2023, the bank said even before the stage four lockdown of Melbourne there were signs of deterioration in the outlook. 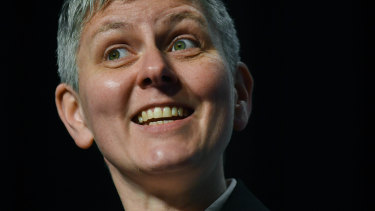 RBA assistant governor Luci Ellis says the number of new household formations will likely fall due to the recession.Credit:Joe Armao

Business investment is now expected to contract by 17 per cent this year and only recover on the back of the mining sector through 2021. The RBA expressed caution around claims by federal and state governments that fast-tracking approvals for major private sector projects would boost the economy, only saying they "could" bring forward "some" work.

Households, buoyed by the government's JobKeeper wage subsidy, early access to superannuation and the coronavirus supplement, will be key to the economy's fortunes over the coming two years, especially with the international border now expected to remain closed until mid-2021.

Spending from households is expected to outpace general economic activity through 2021 and 2022.

Dr Ellis said population growth had slowed noticeably. The poor jobs market would also weigh on the decisions of couples who might have considered moving in with each other.

Westpac's chief economist, Bill Evans, said the RBA highlighted the "real tragedy" faced by the Australia, with the economy likely to be 7.3 per cent smaller in 2021 than if the coronavirus had not appeared.

He said with the RBA's deteriorating forecasts for unemployment, and inflation to still be around 1.5 per cent by the end of 2022, interest rates would not be lifted until at least 2023.

Commonwealth Bank head of Australian economics Gareth Aird said the size of the economic downturn meant the government had to maintain financial support.

"The fiscal tap needs to remain turned on to continue to support income in the economy in the face of such a significant contraction in spending and production," he said.