Reaction and tributes are pouring in following the death of guitar legend Eddie Van Halen. Actress Valerie Bertinelli, who was married to Van Halen from 1981 to 2007 and is the mother to his only child Wolfgang, wrote on Instagram: “I’m so grateful Wolfie and I were able to hold you in your last moments. I will see you in our next life.”

“40 years ago my life changed forever when I met you. You gave me the one true light in my life, our son, Wolfgang,” she wrote next to a photo of the family when Wolfgang was a baby. “Through all your challenging treatments for lung cancer, you kept your gorgeous spirit and that impish grin.” 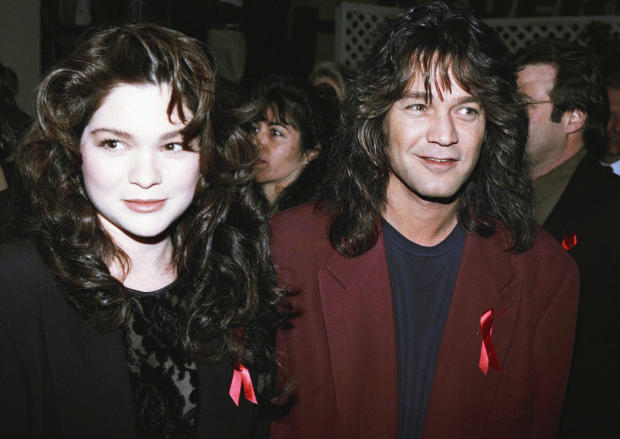 Van Halen died Tuesday at age 65 after an “arduous” battle with cancer, his son said.

“He was the best father I could ask for,” Wolf Van Halen wrote in a social media post. “Every moment I’ve shared with him on and off stage was a gift.”

Other prominent musicians reacted to the rock star’s death:

Heartbroken and speechless. My love to the family. pic.twitter.com/MQMueMF2XO

Sad to hear Eddie Van Halen has passed away. A guitar innovator with a fierce spirit of musical and technical exploration. Prayers and thoughts with his family and friends. pic.twitter.com/TI4ipeIXbR

My heart is broken. Eddie was not only a Guitar God, but a genuinely beautiful soul. Rest in peace, Eddie! …Eddie Van Halen Dead at 65 from Cancer https://t.co/gITtcndQVv

Oh NO! Speechless. A trailblazer and someone who always gave everything to his music. A good soul. I remember first seeing him playing at the Starwood in 1976 and he WAS Eddie Van Halen. So shocked and sad. My condolences to Wolfie and the family. https://t.co/ExAWzFAEYJ

I’m just devastated to hear the news of the passing of my dear friend Eddie Van Halen. He fought a long and hard battle with his cancer right to the very end. Eddie was one of a very special kind of person, a really great friend. Rest In Peace my dear friend till we meet again. pic.twitter.com/Qs8tsLPANJ

https://t.co/QjAj45KED8 Apex talent. An unparalleled titan in the annals of rock n roll. One of the greatest musicians in the history of mankind. Rest In Peace, King Edward

RIP Eddie Van Halen. Van Halen were a tremendous influence on both Vinnie & Dime & Pantera. Hopefully they are all rocking out together now! pic.twitter.com/XtnL33aGsd