Sarah Ferguson was so nervous about meeting the royals at Sandringham that she tripped over one of the Queen’s Corgis, spilled her drink and curtsied to everyone, royal biographer reveals in new documentary

Sarah Ferguson was so nervous about meeting her future in-laws that she tripped over one of the Queen’s beloved Corgis and spilled her drink, a royal biographer claims in a new documentary.

Ingrid Seward, editor of Majesty magazine, reveals the Duchess’ series of awkward faux-pas in tonight’s When Fergie Met The Monarchy on Channel 5.

She told how Fergie, then aged around 24, travelled to the Sandringham estate to meet the family of her boyfriend Prince Andrew – a meeting which could make or break their union.

Unsure to whom she should curtsey, Seward told how Fergie knelt before everyone in order to avoid offence. 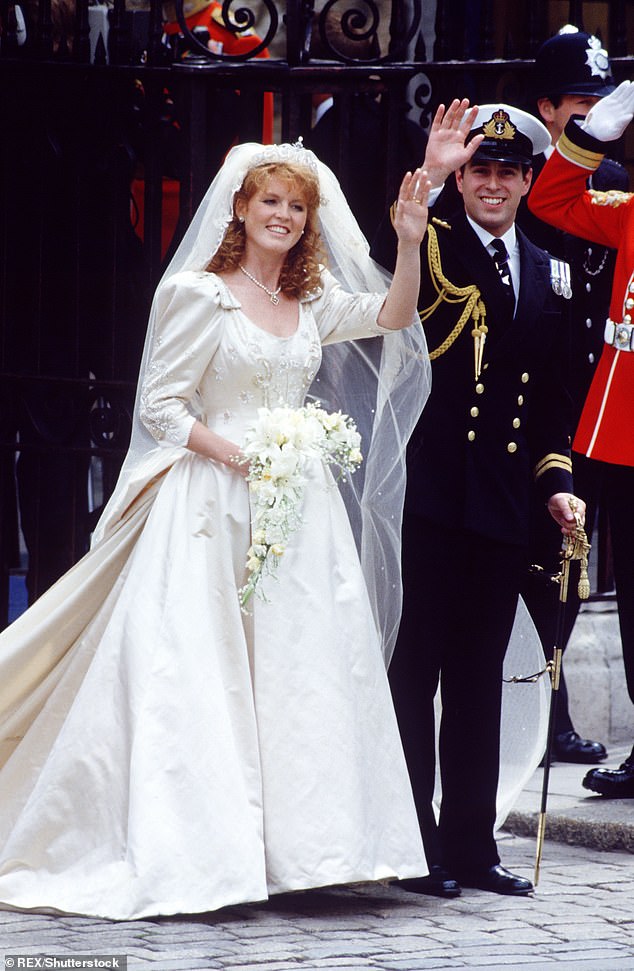 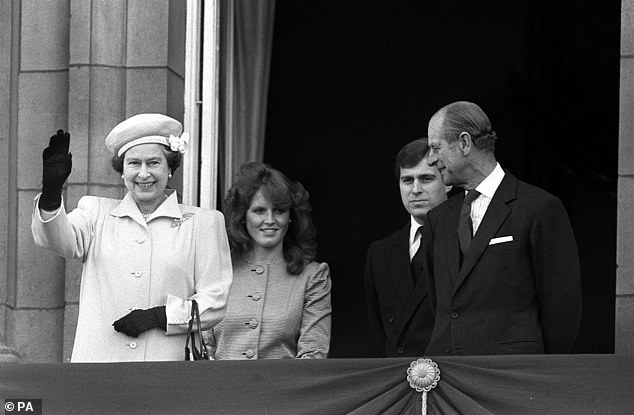 In the documentary, royal commentator and editor of Majesty magazine Ingrid Seward reveals a ‘nervous’ Fergie committed several blunders upon meeting the Queen at the Sandringham Estate (pictured with The Queen, the Duke of Edinburgh and Prince Andrew on the balcony of Buckingham Palace on the Queen’s 60 birthday in April 1980)

Fergie’s parents, Major Ronald Ferguson and Susan Ferguson, had previously been invited for a shoot on the royal estate and it’s thought they briefed their daughter on the dos and don’t of staying with the Firm.

However, Seward said the young redhead fell victim to nerves while trying to impress her boyfriend’s parents – the Queen and the Duke of Edinburgh – along with other senior royals.

‘Her own mother and father had been to Sandringham for shooting weekends and obviously, they had told her what to do, so she was not completely ignorant of how it was going to work, but she was nervous,’ Seward explains.

‘When she walked into the sitting room in Sandringham she tripped over one of the Queen’s Corgis, and she spilled her drink.

‘And in her fluster she thought, “Who are all these people?” so she just curtsied to everyone – but in that way, she knew she was not making a faux-pas.’ 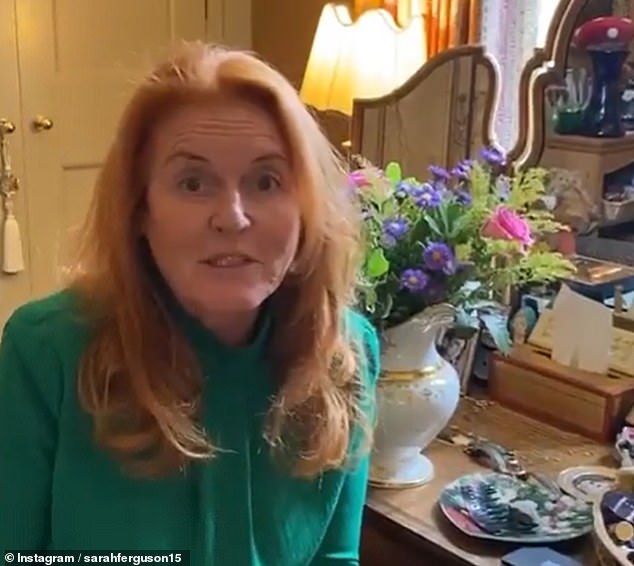 Relationship psychologist Anjula Mutanda tells how meeting the parents and wanting to make a good impression under pressure could lead some people to commit mistakes due to nerves.

‘You know that everybody’s gaze is on you,’ she says.

‘So I think she found herself in that situation of feeling, “I don’t know if they’re going to like me, I also want them to absolutely adore me”. And all that at once can be a pressure cooker for things to monumentally wrong and I think in Sarah’s case it kinda did.’

However, after this awkward introduction, Fergie worked on winning over all the senior members of the Firm, learning to drive carriages with Philip and riding with Her Majesty.

‘She had learned to ride at a very young age and the Queen loves horses and the fact Fergie could accompany her on rides was a huge plus,’ Daily Mail’s Editor at Large Richard Kay observes.

Prince Andrew and Fergie, who had grown up in the same circles but reconnected in 1985, got married on July 23, 1986. 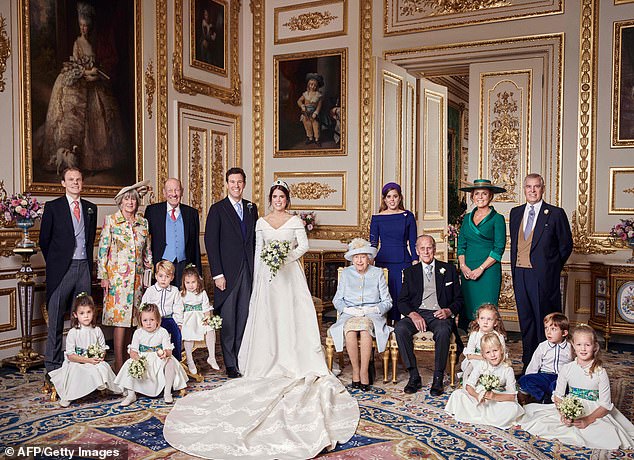 Fergie, pictured right in green, on the occasion of Princess Eugenie’s wedding to Jack Brooksbank in 2018

Unfortunately the couple, who share two daughters, Princess Beatrice, 32, and Princess Eugenie, 30, grew apart, with their relationship starting to unravel in the 1990s, leading to their separation in 1992 and subsequent divorce in 1996.

The Duke and Duchess have stayed ‘best friends’ for their two daughters; they still live together at Royal Lodge in Windsor, where they have both spent lockdown.

However, their estrangement led to a series of indiscretions which caused Fergie to fall out of favour with the royals, especially the Queen.

The documentary also looks back on an incident which became known as ‘toegate,’ where pictures of a topless Fergie having her toes kissed by Texan millionaire John Bryan were published in the press. 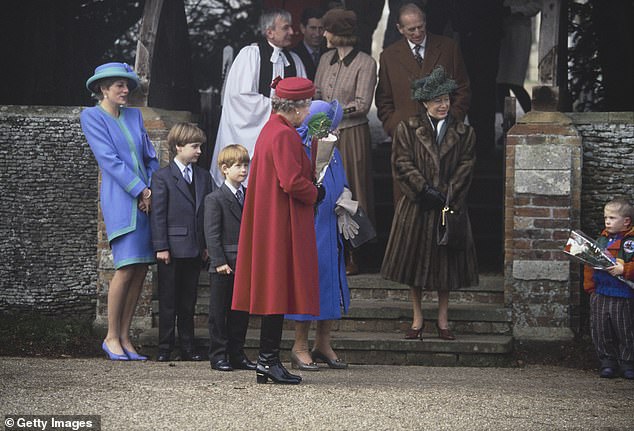 Fergie’s relationship with the royal family suffered from her 1992 separation from Andrew and subsequent divorce in 1996. Pictured centre (short hair) with Princess Diana, left, Princes William and Harry as children, the Queen, Queen Mother, Princess Margaret and the Duke of Edinburgh on 25 December 1991 in Sandringham

The photos, which were released when Eugenie and Beatrice were with their father at Balmoral visiting the Queen, are believed to be the reason why Fergie was shunned by the Royal Family.

It also touches on the ‘cash-for-access scandal’ of 2010, where Fergie allegedly promised a businessman to arrange a meeting with Prince Andrew for the sum of £500,000.

Unbeknownst to the Duchess of York at the time, she was being taped by reporters from the now defunct New of the World tabloid. The Duchess later took legal action to clear her name.

When Fergie Met Royalty airs on Saturday [February 6] at 9pm on Channel 5.