A fast food addict who splashed out £800 per month on takeaways says she’s excited to flaunt her 10st weight loss on her first holiday in years – thanks to a gastric bypass.

Carlie Line, 37, from London, admitted she guzzled her through around £10,000-worth of takeaways a year, tipping the scales at a whopping 22st 3lbs.

She would gorge on a large pizza, side of garlic bread and dessert or a curry five nights of the week, and while at work Carlie admitted she would hit the biscuit barrel up to ten times a day, scoffing up to five at a time.

Size 24 Carlie said she’d been overweight since hitting puberty and as a consequence suffered from gastroesophageal reflux, which causes extreme heartburn. 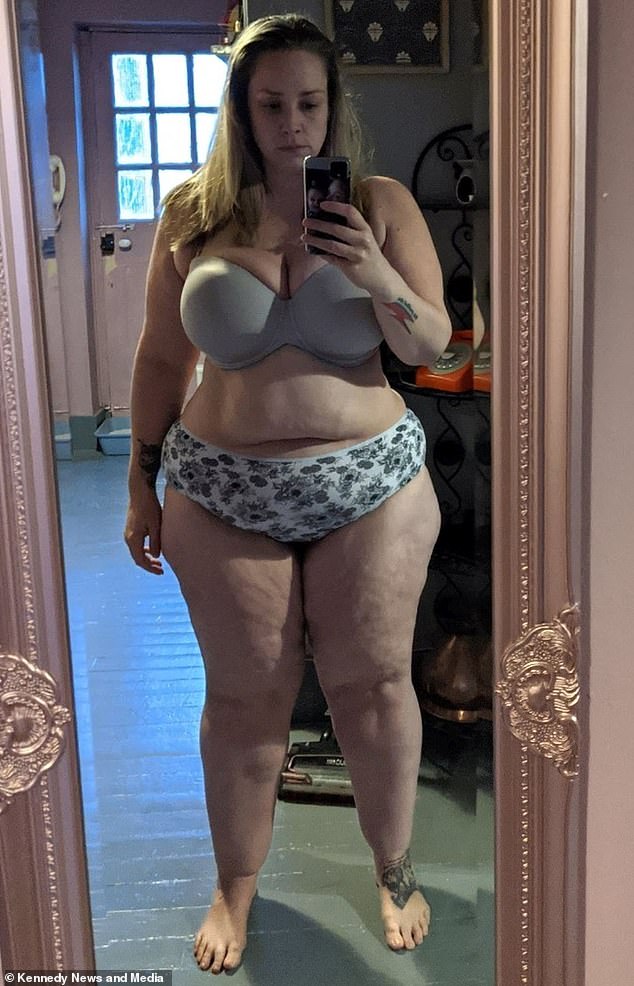 At her highest weight (pictured), Carlie Line, from south London, tipped the scales at 22 stone and three pounds 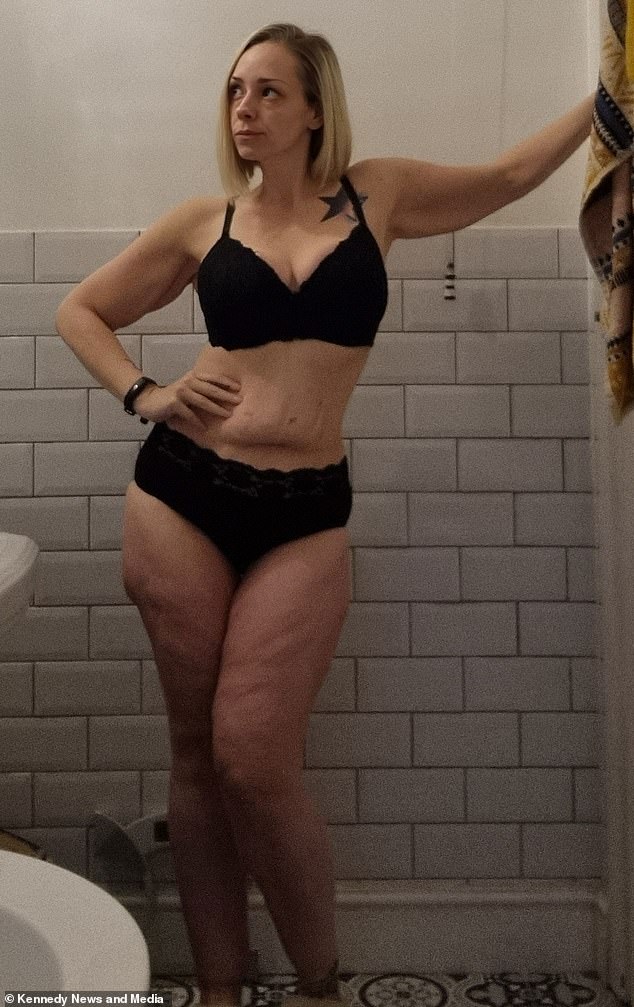 Pictured after her staggering 10 stone weight loss, mother-of-one Carlie says she is excited about wearing a bikini on holiday 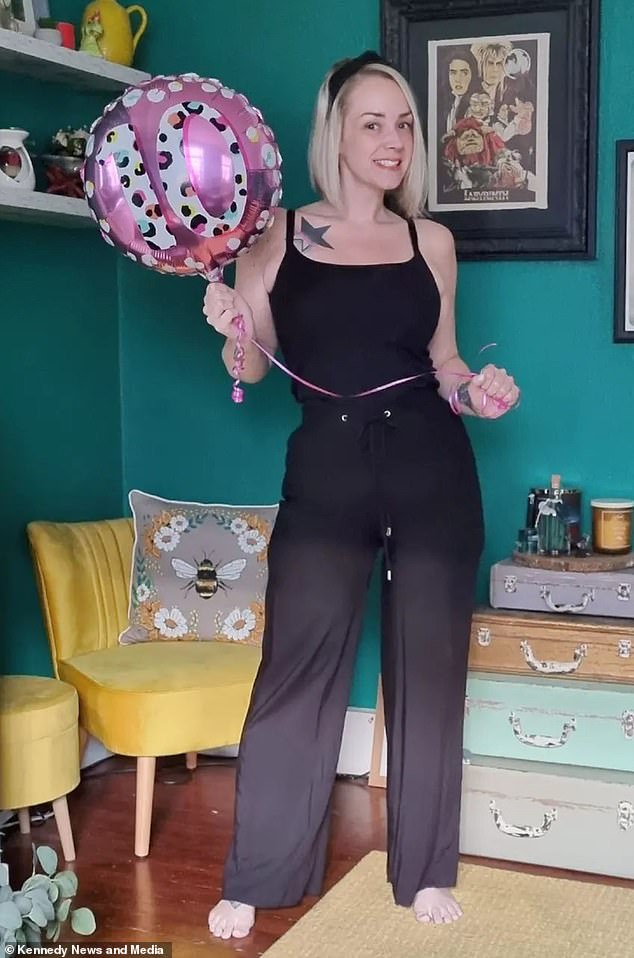 Before losing the weight to become a size 12 (pictured), Carlie used to spend £10,000 a year on takeaways including pizza, Chinese, Indian and more 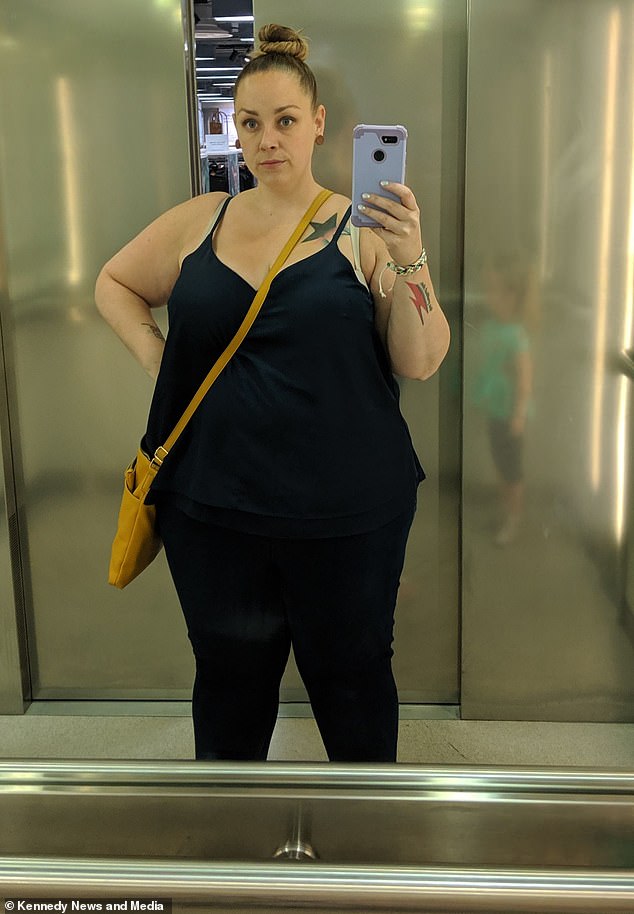 Carlie said doctors recommended having a gastric bypass to help ease her symptoms.

This recommendation, coupled with a determination to ditch unhealthy habits, prompted her to plump for the weight-loss op and saw her shrink down to 11st 13lbs and a svelte size 12.

The picture framer was so self-conscious of her weight that she had avoided going on holiday for six years, fearing how she’d look in a swimming costume.

But now fitting into slinky outfits, and with a skin removal surgery booked for April 2022, Carlie can’t wait to slip into a bikini and showcase her new curves.

Carlie, from Balham, South London, said: ‘I haven’t worn a short skirt since I was 14.

‘I would never get my legs out, never go swimming and I wouldn’t go on holiday because I didn’t want to wear a swimming costume.

‘I had depression and anxiety and I would only go to places that I’d been to before. My sister invited me to a place I’d never been to before and I had a panic attack because I didn’t know if the chairs would be sturdy enough to hold my weight. 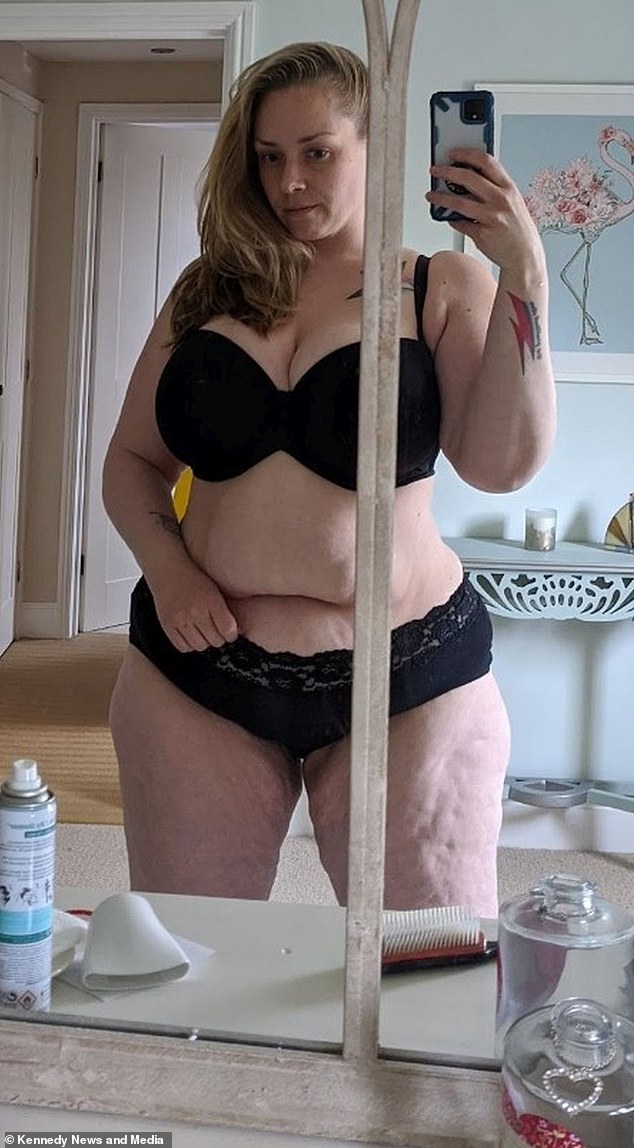 Former fast food addict Carlie, pictured before losing weight, says she felt too self-conscious to wear a skirt at her highest weight 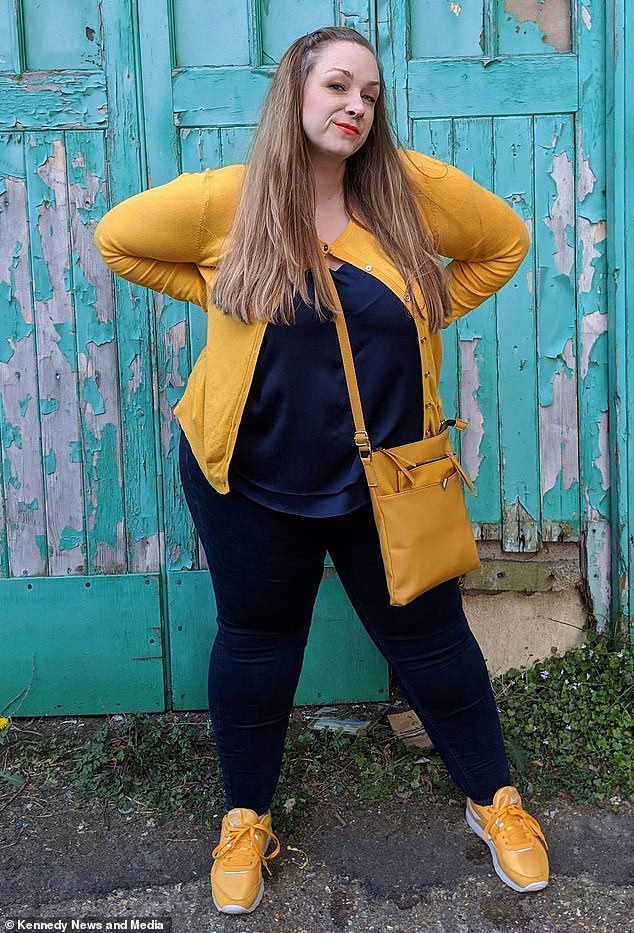 Carlie, shown during her weight loss journey, says her size caused her anxiety about going out, as she would worry about whether chairs would hold her weight 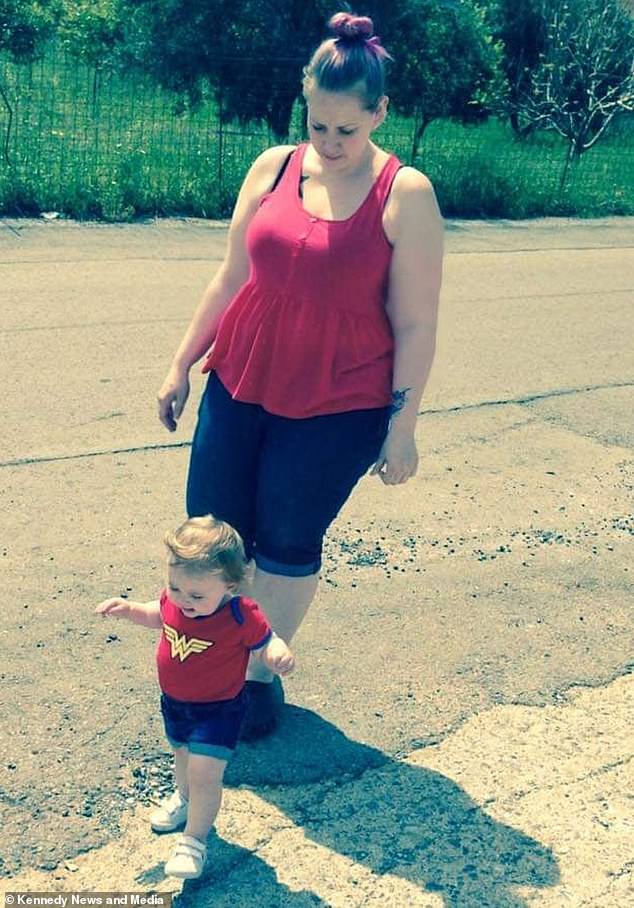 The mother-of-one (pictured with daughter Betsy, now six), says she’s able to be more active with her child now she has more energy 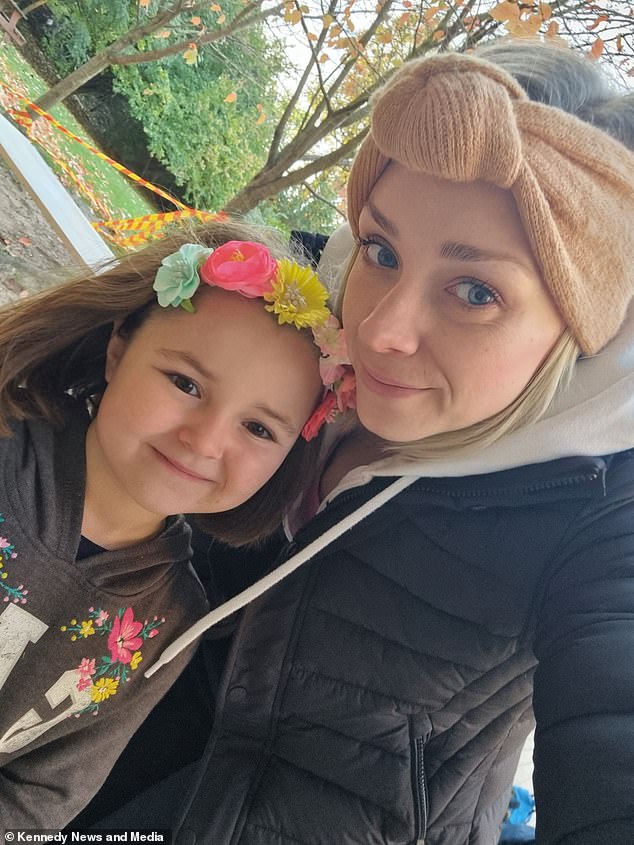 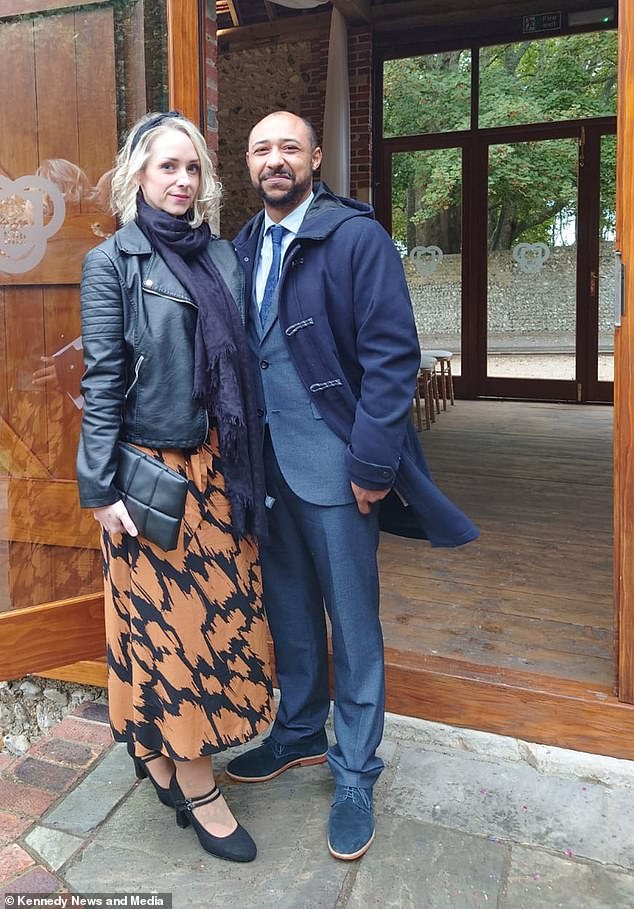 Pictured here with her partner Leon Sinclair, 37, Betsy says she has spent all the money she saved on takeaways on new clothes to fit her shrinking frame

‘My doctor suggested I should get a gastric bypass because of the heartburn, I would get heartburn from just drinking a glass of water.

‘I didn’t eat breakfast because I couldn’t eat anything until my medication kicked in. Then by lunchtime I’d eat everything because I was starving.

‘I can’t wait to see what size I’ll be when I’ve had the skin removed so I can go bikini shopping. I’m really looking forward to it.

‘When we went to Crete I had to live in Crocs because my feet were too big to fit in anything else.’

Food lover Carlie, who hated cooking, would skip breakfast and then rely on fatty convenience foods to fuel her throughout the day.

The 37-year-old documented her surgery and weight loss journey, taking photos during throughout the process 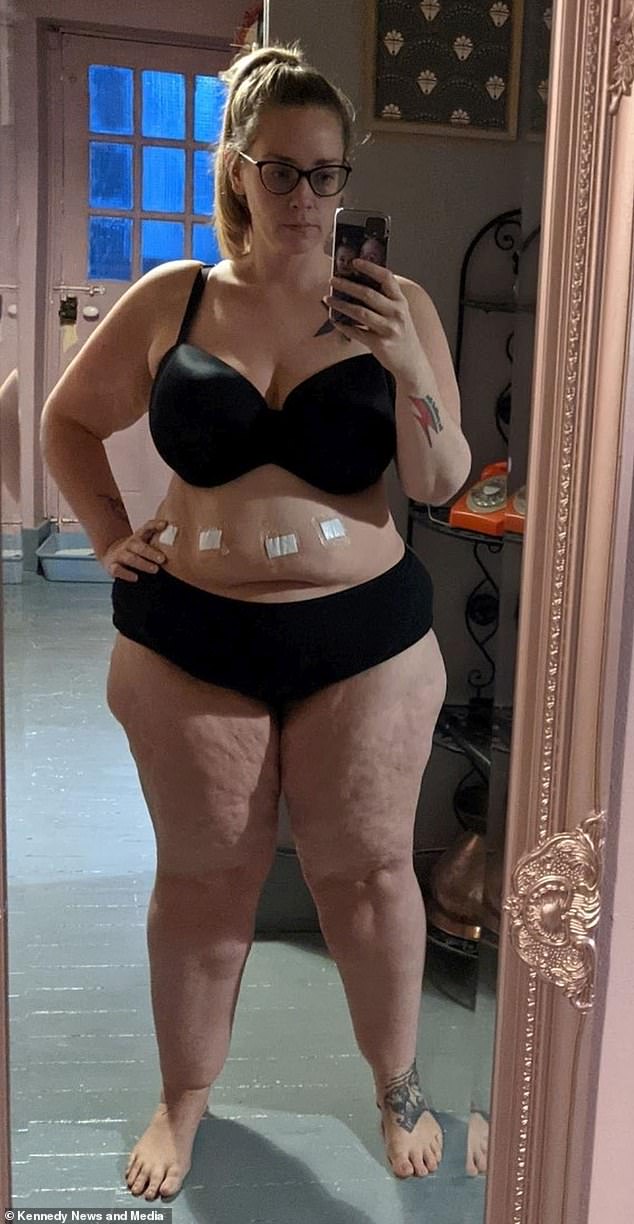 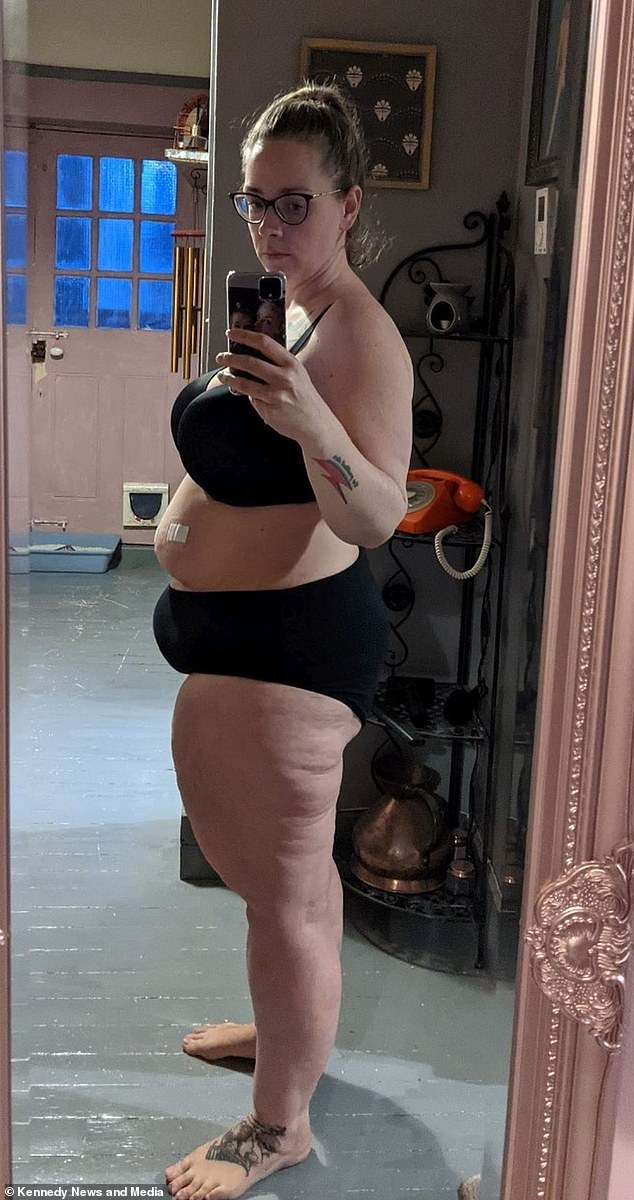 Carlie said: ‘I wouldn’t eat breakfast then at lunch I’d have all manner of things, whatever was there – a bacon sandwich with six slices of bacon, butter, salt, crisps and a yoghurt.

‘If I was near a cafe I’d get a fry up. Then at dinner time, I’d be exhausted because of my weight so I hated cooking and would just order a takeaway.

‘I’d have Chinese, chips, pizza, Indian. I’d have a large pizza with a garlic bread and a cookie dough and I’d do that for four or five nights a week.

‘At work, I would be so tired because of my size that I’d say I couldn’t work anymore, sit down and snack on biscuits, fibre bars and grapes. 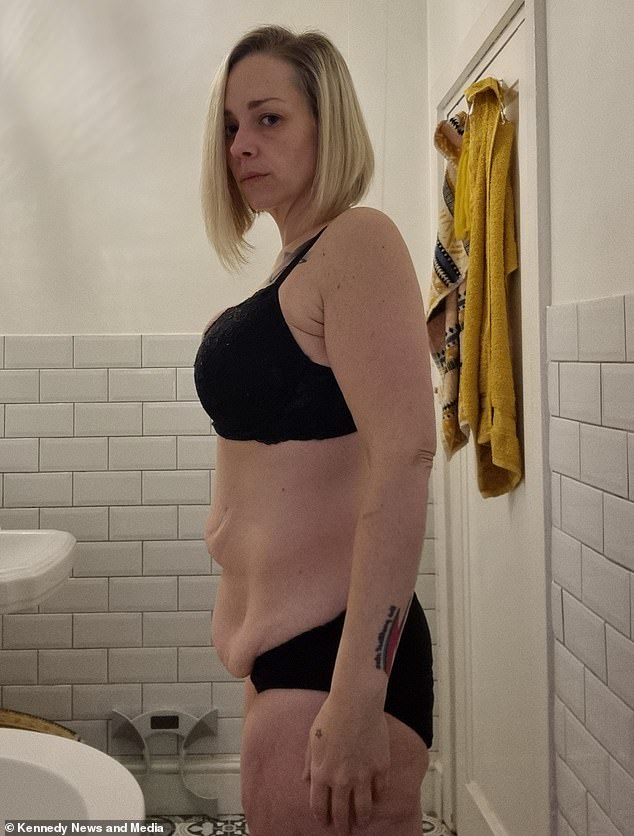 Now she has shed the stones, Carlie is planning skin removal surgery, and says she ‘can’t wait’ to see what size she will be once the loose skin is gone 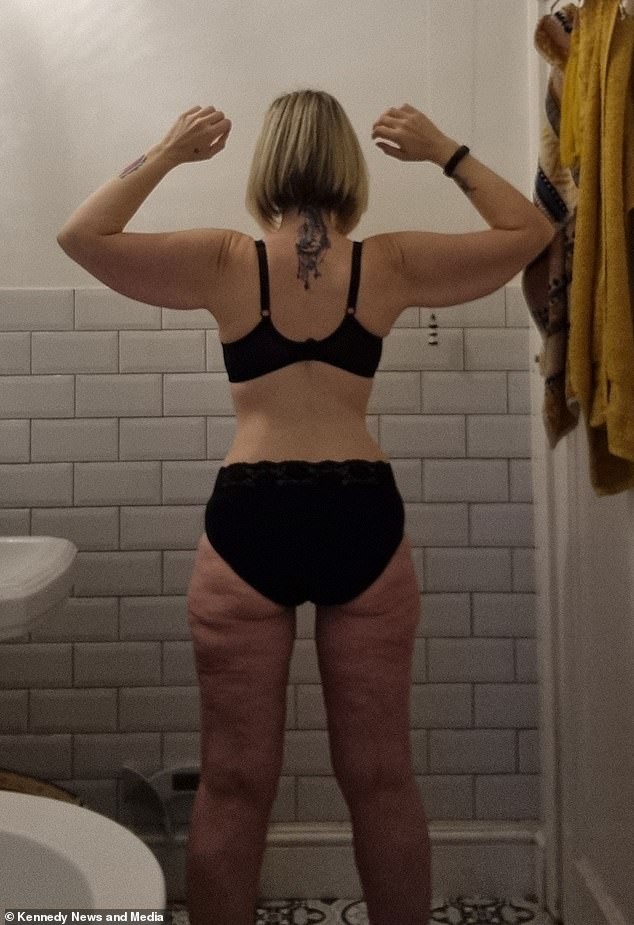 Carlie is due to have excess skin removed to complete her new look in April 2022, before the family goes on holiday to Turkey, where she plans to show off her new figure 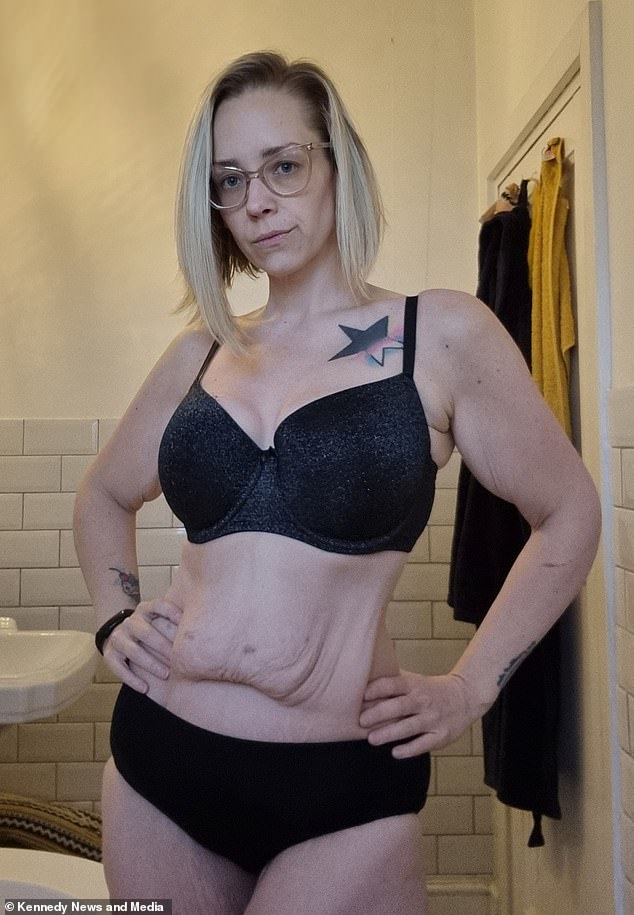 Carlie’s weight-loss surgery means her stomach has shrunk down to the size of an egg, so she has to be careful not to eat too much or too quickly – but it means she eats more mindfully

‘I would snack on biscuits between six and ten times a day and have four or five at a time. I spent around £200 per week on takeaways and another £50 per week on the food shop.’

Carlie says since having the weight loss surgery in November 2020, she’s been given a new lease of life.

Now instead of feeling sluggish all the time, she’s able to be more active with her six-year-old daughter, Betsy, and 37-year-old partner Leon Sinclair.

Carlie is due to have excess skin removed to complete her new look in April 2022 and the family are looking forward to their first family holiday next year where Carlie plans to wear a bikini for the first time in years.

Carlie said: ‘I’m way more confident now. We’re going to Turkey in August after I’ve had my skin removed so I’m waiting to see what size I’ll be before I start buying bikinis. 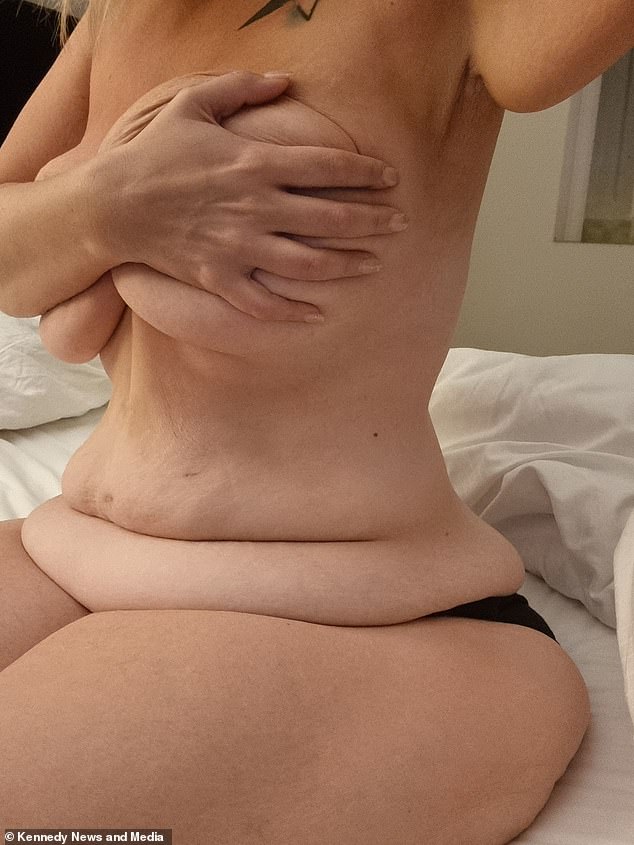 Carlie hasn’t been on holiday for six years. She went to Crete in 2016, and ended up wearing a long dress the whole time or a towel, so she was completely covered 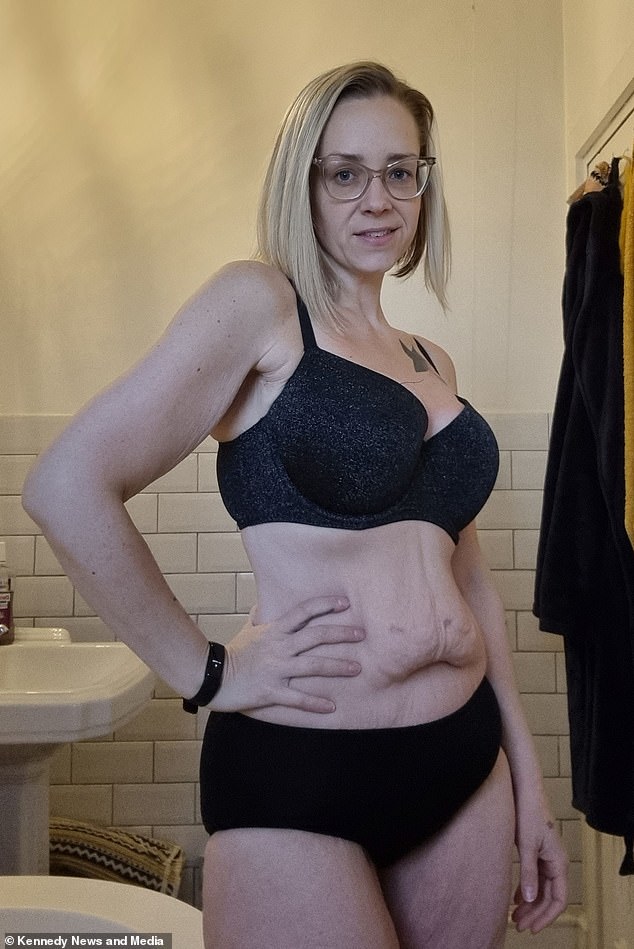 Despite her massive weight loss, Carlie won’t go bikini shopping until after her skin removal surgery to make sure she buys the right size

‘I haven’t been on holiday for six years. We went to Crete in 2016 and I wore a long dress the whole time or a towel over me so I was completely covered.

‘Now I have more energy to go out and do things. Me and Betsy have mum and daughter day on a Saturday and we used to play with toys in the living room but now I want to be out all the time and she loves it.

‘She keeps telling everyone ‘Mummy is shrinking’, which is funny.’

Unfortunately, the mum-of-one hasn’t been able to reap the benefits of having an extra £800 in the bank just yet as ever-shrinking frame means she’s forced to regularly update her wardrobe.

Carlie said: ‘I haven’t been able to enjoy the spare money yet because my body is ever changing so I’m having to buy new clothes, knickers and bras but eventually I’ll be able to make the most of it. I do miss takeaways but we treat ourselves once a fortnight.

‘Rather than having a meal I make a meal out of the starters so I’ll have one onion bhaji, one samosa, some poppadom and a spoonful of korma. All my dinners are served on side plates.

As well as undergoing gastric bypass surgery, Carlie had to drastically change her diet to lose the weight.

Bacon sandwich with six slices of bacon, packet of crisps and a yoghurt

A large pizza, side of garlic bread and cookie dough

Carlie would snack on four or five biscuits between six and ten times a day, grapes, a fibre bar and four cans of diet coke

One slice of French toast with blueberries and strawberries

One sandwich thin, a slice of ham and cucumber

Grapes and a fibre bar

‘There’s a nice Caribbean across the road so if Leon gets jerk chicken, I get a red pea soup which would have been unheard of before.’

Although Carlie has always hated being in the kitchen, she’s started to batch-cook and enjoy healthy chillis and stews in place of ordering in junk food.

Carlie said: ‘Now, for breakfast I have one slice of French toast with blueberries and strawberries and if I can’t finish the toast, I concentrate on the fruit.

‘I have a fibre bar and grapes for elevenses and for lunch I have a sandwich thin with some ham and cucumber.

‘I batch cook chilli con carne without the rice or stew without the potatoes for dinner. I enjoy cooking now more than I did, I like to use the slow cooker and just leave it.’

Carlie’s weight-loss surgery means her stomach has shrunk down to the size of an egg, so she has to be careful not to eat too much or too quickly – but it means she eats more mindfully.

Carlie said: ‘My stomach is the size of an egg now. On Christmas last year I made me and Leon scrambled eggs and salmon and I was so excited I ate really fast.

‘It sat at the top of my stomach, wouldn’t go down and came back up. That has scared me so now I know to eat a little and often.’

In addition to her weight struggles, Carlie also suffers with lipoedema, a condition that causes excess fat to accumulate in the lower part of the body.

This means that although her upper body has shrunk, Carlie’s legs will likely stay the same size.

Carlie said: ‘When I was at school I was big. One of the worst things was when I was around 14, my boobs were an E cup which makes you look bigger anyway.

‘I was always known as the big girl or ‘Big Carlie’ even though I wasn’t particularly big at the time.

‘As soon as I went through puberty, my hormones started making different parts of my body fatter. I’ve always been overweight and when I was 17 I was a couple of stone overweight.

‘My stomach was producing too much acid and it was burning away my oesophagus and I was getting heartburn.

‘That went on until I was 34 when I was diagnosed with gastroesophageal reflux so doctors recommended a gastric bypass to help.

‘I had to lose weight before the bypass so I lost four stone on my own by walking and eating smaller portions even though I didn’t really change what I was eating or go out of my way to lose it.’