The federal government is looking to states and territories to set up mass vaccination centres and may need to use state hospital hubs to help vaccinate aged care and disability workers as it goes back to the drawing board to work out how to complete its COVID-19 vaccination program.

Many of the 318,000 workers in the aged care and disability sector who were in line to get the AstraZeneca vaccine would now need to get the Pfizer vaccine after the Australian Technical Group on Immunisation recommended it should become the preferred vaccine for people aged under 50. 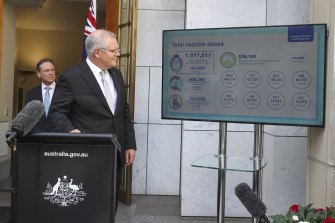 Health Minister Greg Hunt and Prime Minister Scott Morrison are going back to the drawing board to work out how complete its COVID-19 vaccination program. Credit:Alex Ellinghausen

The sector said state hospital hubs should be used to ensure those workers could receive a Pfizer vaccine.

The approach raises urgent questions about costs because the states carry the burden of the mass vaccination sites, while the federal government pays for doses given by general practitioners, and Labor has accused the government of “passing the buck” after bungling its rollout.

Prime Minister Scott Morrison conceded on Wednesday that the vaccine rollout had experienced difficulties and outlined his intention to work with states and territories on a plan for mass vaccination clinics to ensure all Australians could be protected by the end of the year, as the bulk of the 40 million Pfizer doses were set to arrive in the last quarter.

In a speech in Perth, Mr Morrison said he would work with states and territories to find the best method for mass vaccination as soon as new doses of the vaccine become available.

He aired the ambition to vaccinate all Australians by the end of the year as long as the country received imported doses promised by Pfizer and local vaccines produced by CSL under an alliance with AstraZeneca.

Victorian Acting Premier James Merlino has launched mass vaccination sites, such as at the Royal Exhibition Building in Carlton and the Melbourne Exhibition and Convention Centre, to inoculate health workers, police and other front-line workers. He said the state was ready and willing to support the Commonwealth with the vaccine rollout.

NSW Premier Gladys Berejiklian is planning similar sites and welcomed the Prime Minister’s latest remarks, although she called for more transparency from the Commonwealth on the vaccine rollout.

Seven weeks into the national vaccination program, more than 1.2 million doses of both the Pfizer and AstraZeneca vaccines have been administered. It falls well short of the government’s initial target of 4 million doses administered by late March, after international supply delays left Australia millions of doses short.

Aged and disability care workers were included in phase 1a of the vaccine program and the government repeatedly said the goal was to have most of those vaccinated within the first six weeks.

Instead, workers have been scrambling to source their own vaccines due to the AstraZeneca supply problems.

Patricia Sparrow, chief executive of Aged and Community Services Australia, urged the federal government to come up with a new strategy that used both state and federal vaccination options.

“We obviously need a new plan for the rollout of vaccines in aged care,” she said. 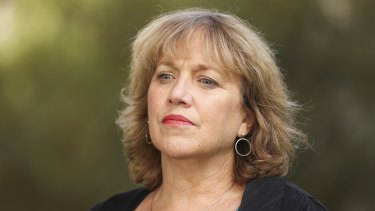 Patricia Sparrow said a new plan was needed for the rollout of vaccines in aged care.Credit:Alex Ellinghausen

“We urge federal and state governments to work constructively together on a strategy that is flexible enough to harness existing resources like state-based hubs, but also make sure that the individual needs of aged care locations and workforce are met including the continuation of the federal in-reach program.”

On Tuesday, Health Minister Greg Hunt conceded that the plan B for vaccinating aged care workers now had to be changed again.

“To be completely frank, we were right at that moment of expanding out with AstraZeneca, to a workforce which is, I believe, an average age of 46,” he said.

“Right now we will redo that assessment. And that’s in fact what we’re meeting with the states and territories about.”

The country’s health ministers are meeting on Thursday, and National Cabinet is resuming bi-weekly meetings from Monday in a bid to fix the vaccine rollout. How to speed up the aged and disability care worker part of the rollout could form part of those discussions.

The vaccines are estimated to cost the federal government about $7 billion but the national cabinet meeting is likely to canvass funding for the delivery.

With 20 million additional doses of the Pfizer vaccine due to arrive from October, federal and state governments would need to co-operate to deliver about 240,000 doses per day over 12 weeks to complete the vaccination program this year.

It is too early to tell whether Pfizer will be able to deliver on that timeline given the demand for the vaccine after the US and Europe paused the rollout of Johnson & Johnson’s vaccine, an adenovirus vaccine like AstraZeneca, following reports of blood clot side effects in a handful of patients. 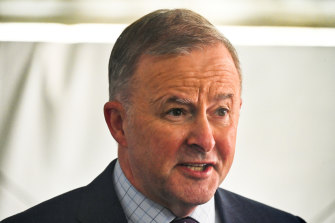 Anthony Albanese said the Morrison government was passing the buck to the states.Credit:Peter de Kruijff

Opposition health spokesman Mark Butler said the Morrison government needed to tell aged care workers when they would be vaccinated.

“Scott Morrison is responsible for aged care workers. These workers are caring for our most vulnerable Australians and were supposed to be vaccinated by Easter,” he said.

The Department of Health did not say how many aged or disability care workers had been vaccinated so far. Instead, a spokeswoman said more than 153,000 vaccines had been delivered to 1272 aged care facilities and residential disability homes.

The department also could not say what percentage of the 318,000 aged and disability care workers were under the age of 50, but said those over 50 could access an AstraZeneca vaccine through GPs or Commonwealth-run respiratory clinics.