A former partner of the woman who has accused Attorney-General Christian Porter of raping her in 1988 says he recalls having “relevant discussions” with her within months of the alleged incident.

James Hooke, now a senior managing director with Macquarie Group, said on Friday he was a person identified in the woman’s diaries and her unsworn statement outlining the allegations, and had spoken to her and Mr Porter about the matter. 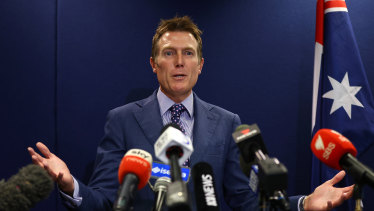 Mr Hooke joined calls for an inquiry into whether Mr Porter was a fit and proper person, saying he would be willing to provide information, while noting the Attorney-General “was manifestly and appropriately entitled to the presumption of innocence”.

The woman has alleged Mr Porter raped her at a school debating competition in Sydney in January 1988, when he was 17 and she was 16. Mr Porter strenuously denies the allegation and says he never had a sexual relationship with the woman.

The woman approached NSW Police in early 2020 with the allegations but did not make a sworn statement. She told police in June she did not wish to proceed with the matter, a day before taking her life.

Mr Hooke said he was “devastated by the untimely death of my very dear friend” and concerned for the privacy and dignity of her family and the wellbeing of Mr Porter, whom he had known for about 30 years.

“Mine is just one set of recollections and I am aware of the fallibility of human memory, however unintentional. That said, I have what I consider to be clear recollections of relevant discussions I had with [the woman] over the years from mid-1988 until her death,” Mr Hooke said.

“I also have what I consider to be clear recollections of relevant discussions I had with Christian Porter from April 1992 in Perth and through the mid-1990s.

“The NSW Police have determined that a criminal prosecution is not possible in this case. I made myself known to the NSW Police after [the woman’s] death and I understand why they were unable to interview me.”

Mr Porter told the media on March 3, when he identified himself as the cabinet minister named in the allegation, that “no one in law enforcement or the law or politics or the media ever put any substance or any specific allegations to me at all” before the story broke on the ABC.

He is now on medical leave. When asked to comment on Mr Hooke’s statement, a spokesman said on Friday Mr Porter “does not propose to comment further”.