“I mean, never held my gal’s hand tighter or held her closer.”

We all spent 2020 — and most of 2021, to be honest — binging whatever new streaming content we could get our hands on. And the same goes for the people making it too!

Before filming Season 2 of Amazon Prime Video’s “Modern Love,” star Garrett Hedlund and his partner Emma Roberts marathoned through all of Season 1. And the two were certainly feeling the love in real life as they did.

“There were two little plus sides to the pandemic. One was was getting to binge watch ‘Modern Love,’ it was one of my favorite things to watch throughout the whole pandemic,” Hedlund told TooFab.

“I mean, never held my gal’s hand tighter or held her closer,” he continued. “And we never wanted it to end.”

He added that he also loved traveling to upstate New York to film — and even shot a 4th of July scene in the middle of winter. 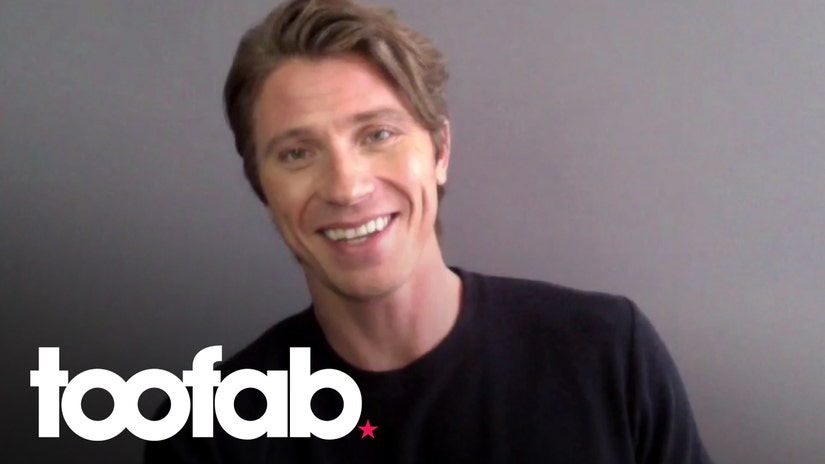 The show is inspired by the New York Times column of the same name, with each episode telling a standalone story of romance and relationships. Hedlund appears in an episode titled “In the Waiting Room of Estranged Spouses,” in which he plays a former marine who bonds with a housewife (Anna Paquin) after they realize their husbands are cheating on them with each other.

Throughout the course of the hour, viewers learn he picked up some handyman skills in an attempt to become a better husband. While fixing a sink certainly helps, Hedlund offered up another alternative to please your better half.

“Communication, mon frère,” he replied. “Being able to communicate, vulnerable moments and all the above. In this situation or what kind of drew me to this character was, in an interview that I’d heard with the actual guy, it sounded like he kind of felt undeserving of love, which is rare for one to think a soldier would feel. Somebody who fought for their country and comes back and is capable of so much, but it can still feel undeserving of love, and I think that’s an emotion that [director] John Crowley really want to explore.”

“I remember we were shooting a scene and I asked him afterwards, ‘Was wrong of me to be sentimental during that scene? Was I dropping the guard too quick?'” he recalled. “And he said, ‘Man, I think it’s so refreshing to see somebody who’s coincidentally a soldier show this side.’ We always think they’re playing tough guy and from that moment, it was refreshing sailing. It wasn’t Mr. Macho, it was Mr. Everyday Guy that just so happened to be a soldier, did something like this, but feels just like the rest of us.”

For the “Tron: Legacy” alum, the episode also allowed him to travel back inside a video game for a scene highlighting his character’s inner demons.

“It was fun. That really went to show how much dough they were going to kick over for this episode. I was really impressed,” he joked.

“It was very sweet. What those elements did were, they really showed a great, fantastical way of exploring this character’s PTSD, hallucinations, visualizations,” he continued. “There were great, there were exciting, they were exciting to shoot and added some flair to keep the story levitating a little bit.”