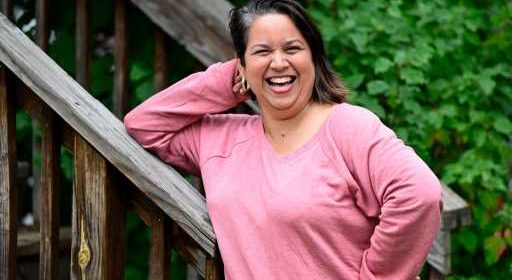 Actor GerRee Hinshaw was driving on Interstate 25 passing Park Meadows when the revelation struck. She was listening to Linda Ronstadt’s “Canciones de Mi Padre.” As much as the pop music legend’s greatest hits had been the soundtrack for Hinshaw’s childhood in Fort Worth, Texas, Ronstadt’s first Spanish-language album of traditional Mexican music offered an epiphany. (The 1987 album remains at the top spot for best-selling non-English language record of all time.)

At the time, Hinshaw was in rehearsals for the Curious Theatre Company production of Quiara Alegría Hudes’ “Water by the Spoonful,” and had been mulling her arm’s-length relationship to Spanish-language music and to Spanish, which she does not speak fluently.

“She’s singing this ranchera, and it suddenly dawned on me, ‘that’s the belt,’ ” recalls Hinshaw, whose memoir-meets-tribute show, “Raised on Ronstadt,” produced by Local Theater Company, opens this week at Boulder’s eTown Hall and runs three short weekends. “The belt she’s using to deliver this song, she’s already used her entire career.”

It’s the big voice Ronstadt calls forth in “You’re No Good,” the one she leverages so achingly in “Blue Bayou.” The one Hinshaw and her mother, Liz Lopez, replicated time and time again in the car, in the kitchen, cranking the radio up, doing harmonies.

“That’s it!” Hinshaw thought. “I mean, I felt it all over my body. I’m playing this music as a touchstone, but again, feeling it’s not my music. And then I just realize, she’s been connecting me to this music the whole time.

“Singing was absolutely a pastime of my mom and me, that’s part of what I unpack in the show,” she says. “Linda’s ‘belt’ is very much rooted in the Mexican music that she grew up with, among other genres. That DNA of musical heritage and that kind of singing that you throw your whole self at in order to get that sound out.”

Heritage can come in waves, carried by the stories mothers and fathers and grandparents, aunts and uncles and cousins share. Or in the case of Hinshaw, it can be carried on the voice of a singer who grew up in the Southwest – Tucson, Ariz., to be exact. Who, like Hinshaw hails from Mexican and European lineage. Who provided the little daughter of Liz Lopez and Mike Hinshaw (who divorced when she was a toddler) a hits-laden childhood soundtrack and later a fresh entry point to self-understanding.

A few years back, Hinshaw pitched the idea for what has become “Raised on Ronstadt” to Anthony Powell, the artistic director of the performance series Stories on Stage. She’d sing some Ronstadt numbers and read from the singer’s 2013 book, “Simple Dreams: A Musical Memoir.” (Ronstadt’s new memoir, “Feels Like Home,” was published earlier this month.) She told him she thought the “audiences would just eat it up, if I read excerpts, and then sing a little song that was evocative of the story. Just give people a big old Linda Ronstadt dish.”

While selling Powell on the idea, she’d also been telling him how much Ronstadt meant to her and her mother, recounting moments they’d sung in the car; or sharing a story about “Blue Bayou” and her grandpa. “And he goes, ‘OK, so our audience is going to want to hear those stories, too. So how about you write those stories? And those would also be readings you did.’ ”

Hinshaw shares this story one morning in early October sitting in her office, which is also the dining room of the Wheat Ridge home she shares with husband Lee, their son, Jackson, and two sizable pups, Finn and Poe. It’s easy to see in her what Powell did. She’s a gifted storyteller – with a laugh that often punctuates a moment — easily aware of beats that will make a listener smile and lean in for more.

“I just think you didn’t hear me,” she told him. “Because what I’m proposing is super easy. I write the stories Ronstadt already wrote, and then I sing these songs. It’s like falling off the log, right? Like, who doesn’t win? And he goes, ‘I hear you.’ ”

That installment of Stories on Stage — including the snippets from Hinshaw’s childhood – took place virtually in March 2021, during the pandemic, and was taped at Boulder’s Nomad Theatre. Local Theater Company artistic director Pesha Rudnick had watched that streamed show with her young daughter. They were sitting in her daughter’s closet with the laptop aglow atop a shoe shelf because they wanted the darkness of a theater.

“It was beautiful,” Rudnick said on a video chat. “She was just giving 100 percent of performance energy with no input from any sort of audience. When the presentation finished, there was this cacophony — just tons and tons of comments in the comments section. And it occurred to me that she wasn’t able to see any of that and wasn’t getting the post-show reaction.”

So, Rudnick, whose theater company specializes in discovering and supporting new plays, texted her. Could they meet? Now.

“I think the part of her presentation that blew me away was how skillful GerRee was at controlling her voice,” Rudnick said. “Even through Zoom, or whatever platform we were using, I could hear when she was mimicking Linda and when she was letting GerRee come through. I couldn’t believe how extraordinary her voice is and how skillful she is as a performer.”

When they met, Hinshaw recalls that Rudnick, asked, “’Did you mean to write a play?’ And I was like, ‘No,’ and she said, ‘Would you like to do that again – live?’ ”

After the performance, Hinshaw felt a little weird, a little hollow. Sitting in her home office, she mimics with her hands the feeling of floating above the stage, not feeling quite rooted. “I had just poured out some really personal stories, so I could understand maybe feeling spent,” she said. “But I felt like something hadn’t touched, hadn’t connected. And that was it. It was the people in the room that I had missed.”

The capacity of Boulder’s intimate eTown Hall is approximately 200, so there will definitely be people in the room come Friday’s opening night. (There’s a preview Thursday.) But Hinshaw won’t be alone on stage either. Back when she began her journey of tribute and self-discovery, back when she pitched Stories on Stage’s Powell, Hinshaw phoned singer-guitarist-mariachi Mari Meza-Burgos. The two met at Curious working on Satya Jnani Chávez and Andrew Rosendorf’s border tale, “Refuge,” which premiered in March.

Hinshaw knew she wanted to do a traditional song or two from “Canciones de Mi Padre.” But, she says, “that was not my comfort zone of genre, so I said, ‘Can I hire you to kind of take me through the paces and help me get a little more rooted.”

In a twist, Meza-Burgos’s mentor is actor-composer-musician Daniel Valdez (a mainstay collaborator at Denver’s Su Teatro). Take a look at the album cover for “Canciones. That guy behind Ronstadt, strumming a big guitar, his head tilted back in song, that’s Valdez. How do you say “kismet” in Spanish?

For “Raised on Ronstadt,” Meza-Burgos will join guitarist Joe Mazza and musical director-pianist Scott Martin as the Ronstadt-Hinshaw back-up band. The show’s directed by Dee Covington, a friend of Hinshaw but also one of the area’s shrewdest, most compassionate directors.

“I’m always gravitating towards the open-hearted actors…and GerRee is such a heartful person,” Covington said during a video conversation. “And, as a writer, writing her first piece, she’s just so vulnerable. She’s already cracked open.”

The rehearsal the evening before signaled a sea change in the production, Covington said. As much as the play is about Hinshaw and her mother, it had taken a decided step toward understanding her in the context of the Lopez family.

“GerRee says right away in the play that her mom says the Lopezes are not chiflada. They don’t draw attention. They’re not flashy. They don’t lead with that sort of ego. Because culturally that can be a problem.”

It may be why Liz Lopez could belt Ronstadt songs with her daughter in their sky-blue Dodge Colt on the Texas highways but has, what Hinshaw calls “a stage four case of stage fright.”

“I think we’re learning the DNA of the play is that navigating the necessity of visibility while navigating a world that encourages you to be invisible,” Covington said.

When I tell Hinshaw about the chiflada conversation, she laughs and then relishes in the trickiness of the word. “It can totally be a term of endearment,” she says. For instance, if you’re teasing someone in a loving way about how very extra they’re being,” she explains.

There’s no way embarking on a solo show isn’t a little chiflada. It’s gotta be. Thankfully, “Raised on Ronstadt” has all the makings of the best kind of “extra.”

Subscribe to our weekly newsletter, In The Know, to get entertainment news sent straight to your inbox.