Giant crab splits golf club in half with pincers in viral video: 'He's beaten us'

A group of Australian golfers had their game interrupted by a grabby coconut crab, and it cost one man a golf club.

The moment was caught on video in October 2020, but the 1-minute and 39-second clip has gone viral after a Reddit user by the name of Lessons_Learnt shared it to the site’s r/Australia and r/WellThatSucks subreddits.

“Golf in [Far North Queensland]. Crab takes a liking to some golf clubs,” Lessons_Learnt captioned one of their posts.

In the video, it’s shown that the coconut crab – also known as a robber crab in Australia – has somehow managed to climb up a wheeled caddie bag, and it grabbed ahold of a set of golf clubs with its strong legs and pincers. The owner of the golf clubs, a man named Alan, tried to dislodge the crab by pushing the caddie bag down a hill. When that didn’t work, he tried to carefully free his clubs from the crab’s grip by hand.

Two of the three clubs the crab held onto were freed, but the final one remained firmly in the crab’s left pincer. As someone tried to gently wiggle the driver club out of the crab’s grip, the shaft of the club snapped in half.

“You know what, just let him have it,” a bystander remarked at the end of the video. “He’s won the victory. He’s beaten us.”

Coconut crabs, which have been aptly named for its ability to crack coconuts with its powerful pincers, are said to have a pinch force that rivals the bite of an adult lion. A limited scientific study from 2016 examined 29 coconut crabs in Okinawa, Japan, and found the tropical crustaceans had a pinch force that ranged from 29.4 to 1765.2 newtons (6.6 to 396.8 pound-force).

LION STARES, GROWLS AT NATURE GUIDE FROM OUTSIDE A KITCHEN WINDOW: VIDEO 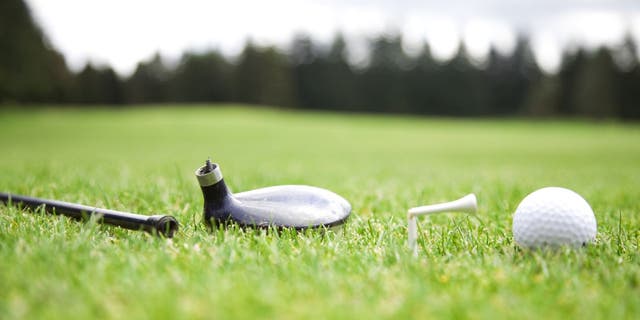 A group of Australian golfers had their game interrupted by a grabby coconut crab, and it cost one man a golf club.
(iStock)

From these findings, the researchers calculated that an 8.8-pound coconut crab could exert up to 3300 newtons (741.8 pound-force) – which surpasses the average 1314.7-newton (295.6 pound-force) bite that lions reportedly have.

Coconut crabs are native to the Indo-Pacific. In Australia, locals call these terrestrial crustaceans “robber crabs” due to their penchant for “stealing” things.

The video of the golf club-loving coconut crab was captured at a golf course on Christmas Island, an Australian territory in the Indian Ocean. Christmas Island National Park says that its native coconut crabs can weigh more than 8 pounds and measure up to 3.3 feet in length. 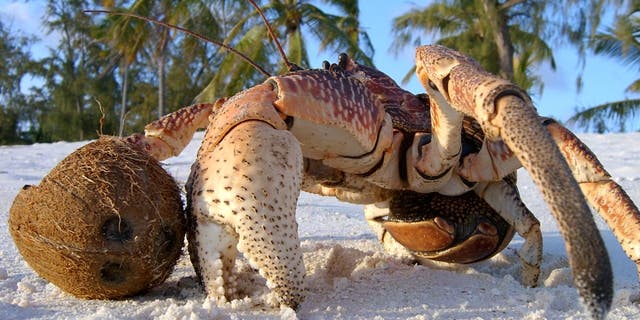 Coconut crabs are native to the Indo-Pacific. In Australia, locals call these terrestrial crustaceans ‘robber crabs’ due to their penchant for ‘stealing’ things.
(iStock)

Reddit user Lessons_Learnt told Fox News Digital that they aren’t tied to Buhner or his son, and that they found the video on ABC Australia’s Facebook page, which shared the clip in 2020.