NSW Cabinet is still considering how the state should handle the flammable cladding crisis more than six months after receiving advice from the building commissioner, leading to accusations the government is making "glacial progress" to fix serious risks.

Some 444 high-risk buildings across NSW that will need cladding partially or completely removed remain on a register compiled by a taskforce set up the government – a drop of 19 since December.

Eight of them are government-owned buildings, which is unchanged on late last year. SafeWork NSW also occupies a privately owned building listed on the flammable cladding register. 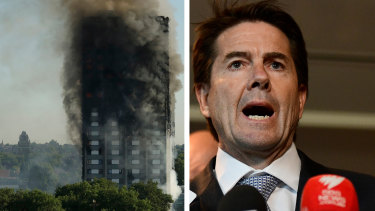 Building Commissioner David Chandler handed a plan to the government last August to deal with the flammable cladding crisis, two weeks after he took the role. His recommendations have not been made public.

Under fire from the Opposition over how long it was taking, Better Regulation Minister Kevin Anderson said the government was "carefully considering" the commissioner's plan. The cladding taskforce continued to "methodically work" through the buildings on the register.

"We are acting. A significant amount of work is being done in NSW in relation to the cladding issue," he told a budget estimates hearing. "The number of buildings [on the register] is coming down."

He would not comment on what the recommendations from the building commissioner were because they were before Cabinet.

Mr Anderson said the problem of flammable materials was different for each building, ranging from window sills to foyers and exterior cladding.

"We are significantly making inroads into this very complex problem," he said.

But Labor MP Courtney Houssos said the small reduction in buildings on the list demonstrated that the government was making "glacial progress" in acting to improve public safety.

Since December, 14 buildings on the high-risk list have been re-mediated.

The dangers of flammable cladding were exposed by the Grenfell fire in London.

While owners and tenants are informed when concerns about cladding are found, the government has not publicly released the list of buildings on the register. It means potential buyers or prospective tenants cannot find out whether a building is on the list.

Mr Anderson also conceded he had met the cladding taskforce just three times, despite it meeting 52 times since it was set up. However, he said the taskforce had met prior to his appointment as Better Regulation Minister in April last year.

Citing Victoria's $600 million to rectify dangerous cladding, Labor MP John Graham challenged the minister over whether he would advise the NSW Treasurer to include funding for flammable cladding in the state's planned economic stimulus package.

Greens MP David Shoebridge, who has led a parliamentary inquiry into building standards, raised concerns about the continued use in cladding of glue and double-sided tape, which lost their adhesiveness when temperatures reached 50 and 80 degrees respectively.

It raised the risk of a "dangerous shower of debris" falling on emergency services workers and building residents in the event of a fire in a building, he said.

Customer Service executive Peter Dunphy said a building products panel was in the process of investigating a range of cladding materials, and would ensure there was consistent advice about them. "At the moment we are going through the investigation phase," he said.