A Russian billionaire’s links to a gas exploration venture involving Origin Energy has triggered calls from the head of a federal parliamentary inquiry for a freeze on taxpayer funding flowing to fossil fuel projects in the Northern Territory’s Beetaloo Basin.

Russian oligarch Viktor Vekselberg is on the list of individuals under economic sanction by Australia. He owns a stake in Lamesa Holdings, the largest shareholder of Falcon Oil and Gas, which is the junior partner in a joint venture with Australian-listed Origin Energy. 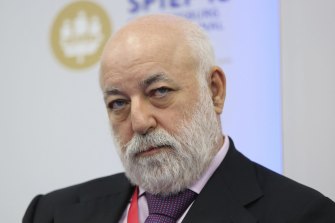 Billionaire Viktor Vekselberg is on Australia’s list of economic sanctions applied to Russians who are linked to Vladimir Putin’s regime. Credit:Andrey Rudakov

The joint venture is exploring gas tenements in the remote basin, which the federal government says is key to its plans to expand the nation’s fossil fuel production and achieve a “gas-fired” economic recovery from the pandemic. More than $220 million in public funds has been committed to help the industry develop in the region.

“There needs to be a hold on all Beetaloo funding until it is clear how the sanctions will be enforced,” said Greens Senator Sarah Hanson-Young, who chairs the Senate inquiry into the area’s development.

“We need a solid guarantee this Russian billionaire will not get any dividends out of the Beetaloo Basin.”

Origin executive Tim O’Grady told a hearing on Friday the company’s Beetaloo exploration joint venture had “nothing to do with Mr Vekselberg”.

“We have no relationship at all. There is an interest by Mr Vekselberg but it is a passive interest,” Mr O’Grady said.

Origin Energy has said neither Lamesa nor Mr Vekselberg had direct involvement in the Beetaloo project. Maxim Mayorets, Mr Vekselberg’s representative on the Falcon board, has agreed to step down.

Origin last week contacted government officials to seek clarification about the effect of sanctions on Mr Vekselberg and is awaiting advice.

Officials from the Department of Foreign Affairs and Trade told the inquiry they were forming an opinion about the legality of government funding of Origin’s Beetaloo joint venture.

“Origin Energy has not applied for nor received any grants related to the Beetaloo Basin Cooperative Drilling Program,” Mr Pitt said.