The Australian Grand Prix Corporation is being sued for more than $8 million for the snap cancellation of a performance by British pop star Robbie Williams at the 2020 Formula One event in Melbourne.

The grand prix will return to the city this week for the first time since the 2020 race at Albert Park was cancelled at the eleventh hour. 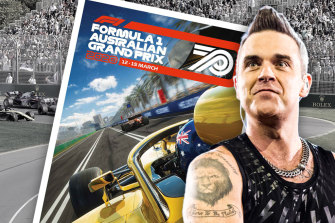 Robbie Williams was booked to perform at the 2020 grand prix.Credit:The Age

Racegoers were waiting to enter the track on March 13 that year when it was announced by megaphone that the event would not go ahead.

Williams was booked to perform the following night, with a talent fee of $1.94 million, when his gig was also cancelled, according to a writ filed in the Supreme Court last week.

World Touring Melbourne – part-owned by Hollywood actor Will Smith, who slapped Chris Rock at the Oscars last week – is alleging the cancellation was a breach of the Australian Grand Prix Corporation’s obligations.

The touring agency is seeking $7.594 million for costs it incurred, another $1.128 million in lost profits, and interest.

A writ filed by Gadens law firm lists venue hire, backstage catering of $32,500, production costs such as sound and lighting, publicity and legal fees among the costs.

World Touring Melbourne said it was informed of the cancellation during a teleconference with the Australian Grand Prix Corporation and local touring partner Dainty at 1.30pm on March 13 – the same day racegoers were told at the gates.

The corporation was responsible for “undertaking and facilitating the organisation, conduct, management and promotion of annual Formula One events at Albert Park”, the writ alleged.

Haydn Lane, general manager of corporate affairs and communications at the Australian Grand Prix Corporation, said that as the matter was before the court, “we won’t be making comment at this time”.

The $99 cost for tickets to see Williams was refunded to fans.

Miley Cyrus was also booked to perform along with supporting acts such as the Veronicas in gigs at the Lakeside Stadium.

Entertainment company Mushroom Group has booked four Australian artists to perform this week when the grand prix returns to Melbourne on Thursday.

Gadens law firm was contacted for comment on Monday.