This is as much a sound and light show as a dance piece. While 10 dancers, in styled street clothes and heavy duty sports shoes, form an action-packed core, the pounding music from four onstage musicians and curtains of light that reshape the space are integral elements. 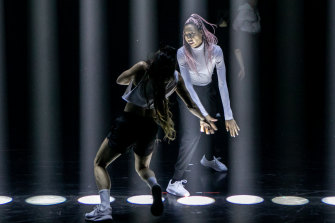 Frontera dancers as part of the Sydney Festival 2020.

Dana Gingras focuses on extremes in her choreography: from everyday moves like walking and running (though very, very fast) to virtuosic jumps with dazzling twists and turns.

For much of the time they happen together in a mesmerising staging of individually moving bodies criss-crossing the dimly lit space at hectic speeds and defined trajectories that nonetheless leave you fearing collisions at any moment – though there were none that I saw amongst this skilled, bold Canadian company, Animals of Distraction.

Its concerns with the state of humanity could be read in this sequence as “has the world gone mad?” in its digital reach that appears to have no barriers. But the dancers also present the physical opposite: national borders being tightened and terrified refugees attempting to get out.

In this case the “walls” are formed by a row of spotlights that pierce the gloomy light as dancers hurl themselves back and forth across them. Later, individuals are mercilessly followed by a single spotlight and a narrow band of light rakes “the dead” struck down in action like the human remains of Pompeii under volcanic ash.

Through all this the band – named Fly Pan Am – hammers out its message of horror on guitars, drums and percussion. It is loud and inescapable, the sound vibrating through the theatre seats for added effect.

Although there are some quiet and still moments, the relentless visual and audio attack eventually dulls the impact. There are brilliant dramatic snapshots that lodge in your mind of scenes and high-flying individuals, but overall, Frontera seems to miss the point by making it too often for too long.