Armed with florist scissors and surrounded by foliage, Jules Loong starts with spruce. She cuts and curves stems of the conifer until she has a ring of needles. Then she builds up layers: in go three pine cones; a dash of spinning gum; a hefty dose of berzillea.

By the end there are no clean edges, no loud colours and no gaps. This wreath looks as lush as a forest. All it needs is a front door. 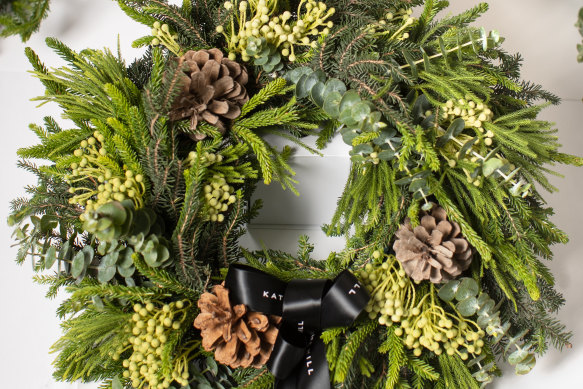 There’s nothing new about dressing houses for Christmas but wreaths seem to be on a new roll. In some streets there’s barely a bare door in sight. I put it down to COVID. Even in the thick of the pandemic, when other people’s houses were strictly off-limits, a carefully positioned wreath could spread Christmas cheer all the way to the footpath.

Kate Hill Flowers, where Loong works, will sell hundreds of wreaths between now and Christmas. Other florists are the same. This year, the Royal Botanic Gardens Melbourne Friends group is running not one but two wreath-making workshops.

Hanging wreaths for Christmas is thought to have begun in the 16th century, around the same time as Europeans started cutting conifers to bring inside as Christmas trees. All the branches these revellers removed to squeeze an evergreen through the front door were turned into decorations in their own right.

While these decorations started out as simple rings – symbolising eternity – things have gradually gotten more elaborate. Kate Hill Flowers has been known to make wreaths with everything from red baubles, cinnamon sticks and twigs to billy buttons, moss and the stems of cotton plants. 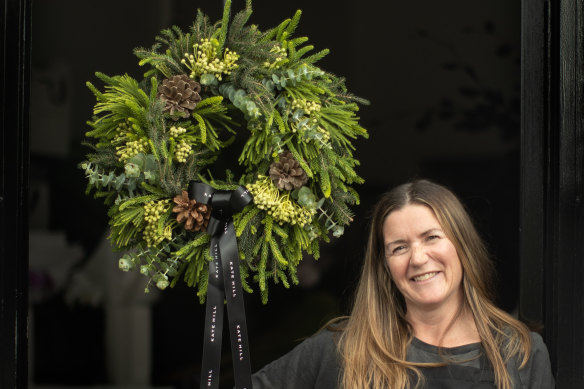 Jules Loong with her wreath.Credit:Simon Schluter

But the owner, florist Kate Hill, says the outfit’s most popular wreath mixes a sprinkling of gums leaves with exotic (but locally grown) foliage, green berries and flowers to create a full, fragrant, and predominantly green display that is “elegant and contemporary”.

Other wreath makers are, however, going heavier on Australian plants. Bush in Carlton North, does away with exotics entirely. Owner, Michael Pavlou, a florist who also owns a banksia farm in northern Victoria, is tapping into a crowd that “wants something authentic to our environment … rather than holly and berries.”

In place of pines, firs or spruces, his wreaths contain Woolly Bush (Adenanthos sericeus), which hails from the coast of Western Australia or the sheoaks of southeastern Australia. 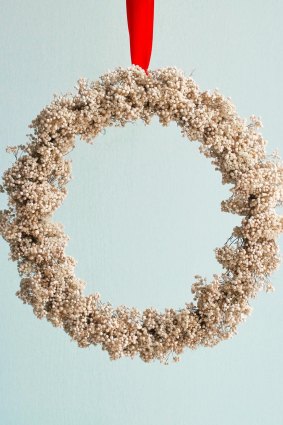 A wreath from Bush made of native rice flowers (Ozothamnus diosmifolius).Credit:Bush

Gumnuts and hakea pods play the role of pine cones and a Banksia coccinea flower (still out in December this year, thanks to the cooler-than-usual weather) might inject a jolt of red.

Yellow paper daisies, toothed banksia foliage and silver gum leaves are among the other offerings that make it into his visually striking arrangements. Pavlou says his only limitation is that the plants need to look good as they dry because, unlike fresh wreaths that are arranged in a wheel of florist foam, his wreaths are on circular metal frames and make do without water.

“We try to have as minimum (environmental) impact as possible,” he says. But it does mean the plants have to be durable. “Paper daisies are perfect for wreaths because they hold their colour as they dry, gumnuts also dry incredibly well. Throughout the year we also collect things that flower earlier (than Christmas) but dry well. Ozothamnus finished at the end of October but it looks so pretty that we started hoarding it for wreaths.”

But really anything goes and, when making your own wreath, it pays to experiment. Ask these florists what they do at home and their answers are as diverse as you would expect. Loong says she tends to keep it simple and earthy. “I would probably just take the spruce and make it into a garland, you wouldn’t even have to put it on a frame.” 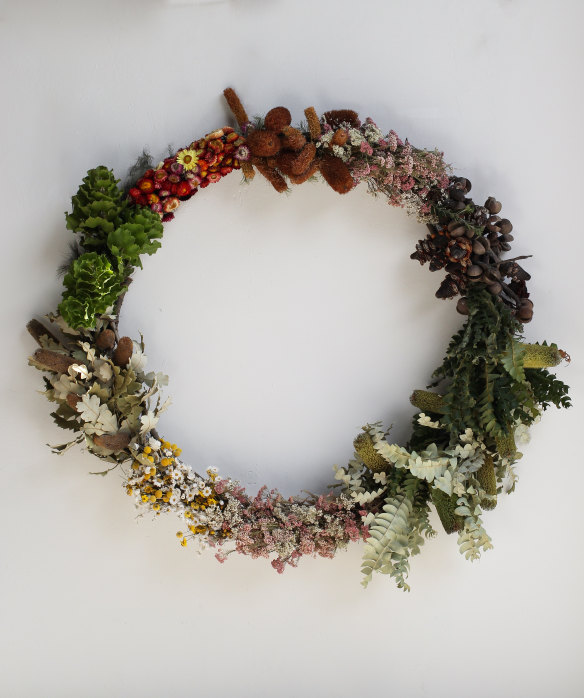 A native wreath from Bush.Credit:Bush

Hill, who has two young children, says wreath-making has become a family activity at her place. She and her children attach gum leaves, gumnuts and pine cones to a ring made of dried twine. She says you could also use succulents.

Pavlou, on the other hand, says his focus at home is not so much on a wreath but on the Christmas table display. He says his “absolute favourite” for that is a mass of flowering gum in a vase – or multiple vases – of water. It doesn’t even have to be red, he is also happy with orange, pink or white.