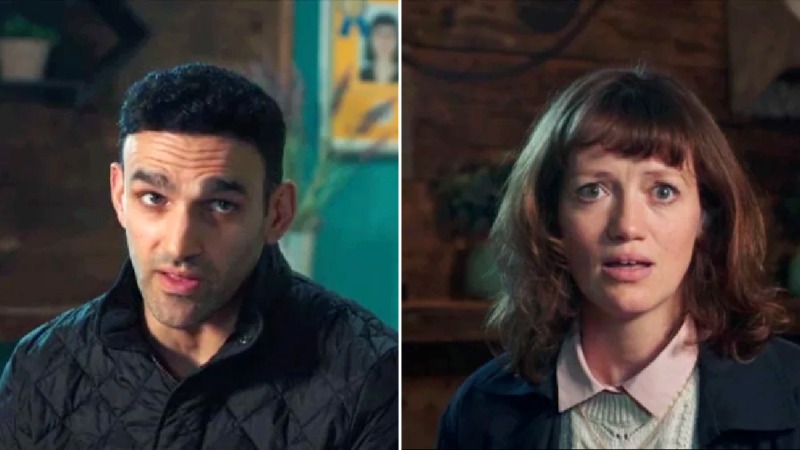 There was good news and bad news for Eli (Davood Ghadami) and Amelia (Lucy Briggs-Owen) in tonight’s Holby City. First, the very best news. After going through numerous rounds of IVF and repeated disappointment, Amelia discovered she’s finally pregnant. The pair of them were so happy, and Amelia said she knew that Eli was going to be a great dad.

But she’s also currently on an experimental proton beam trial, which she hopes will cure her brain tumour. There would be no risk to the baby from the actual therapy, but because it’s a trial Amelia’s pregnancy will rule her out of taking part. Essentially it now means that she has to face the distressing decision of whether she has the treatment, or proceeds with the much-wanted pregnancy.

There was heartbreak for Dominic (David Ames) when his mum Carole (Julia Deakin) was admitted to Keller after having another stroke – and he had to face the fact that she’s dying. Her dementia has now advanced to the point where she often doesn’t recognise Dominic. Ange (Dawn Steele) gently reminded her, ‘This is Dominic. He’s your son.’ ‘My son is called Darren,’ Carole said, her memory of Dominic coming from when he was still a little boy, before he changed his name.

Elsewhere, Josh (Trieve Blackwood-Cambridge) procrastinated about going to the first group therapy session for his bulimia. As usual on Holby it was a patient who gave him the nudge he needed. Yasmeen (Laura Lake Adebisi), like Josh had been before her, was a young carer looking after a parent. He told her that being an adult ‘sometimes means facing the scary stuff,’ and took himself off to the therapy session.

Though everyone in the group was sympathetic, Josh still couldn’t quite bring himself to open up to them – though he may have made a connection with a group member called Claudia (Lottie Tolhurst). Does she just want to be a friendly confidante to Josh – or is Ange about to find herself with a love rival?

Russ Faber (Simon Slater) took Henrik Hanssen (Guy Henry) for a drink at Albie’s in an attempt to make friends again after he lied to Hanssen about Oliver Valentine’s PTSD. He admitted that Ollie had been a project for him, to help him over his grief when his husband died. The two men actually got a little bit merry, and Hanssen said he ‘rather admires’ Russ.

They deserved a drink after a busy day that involved some drunken pirates from a stag do, one of whom had inserted a utility knife somewhere he shouldn’t to impress the ‘lads lads’ on the stag. Yo, ho, and indeed ho.

In the few moments when Amelia wasn’t getting excited about being pregnant, getting fearful about the baby and being devastated by the news about the trial, she was trying to inject some Christmas spirit into the wards of Holby. Not everyone was on board with this. ‘Amelia wanted to know where I stand on a Christmas choir,’ said Madge (Clare Burt). ‘I wanted to say “on the conductor’s neck,” but I didn’t want to dampen her enthusiasm.’

Sue Haasler is the author of five novels and the official BBC Holby City book, which you can read about here.