Lovers of Italian cuisine are drooling over a home cook’s indulgent pasta pie made from five simple ingredients.

She said she starts by browning about 900 grams of minced beef, carefully draining the fat before adding four cans of tinned tomatoes and two jars of tomato paste. 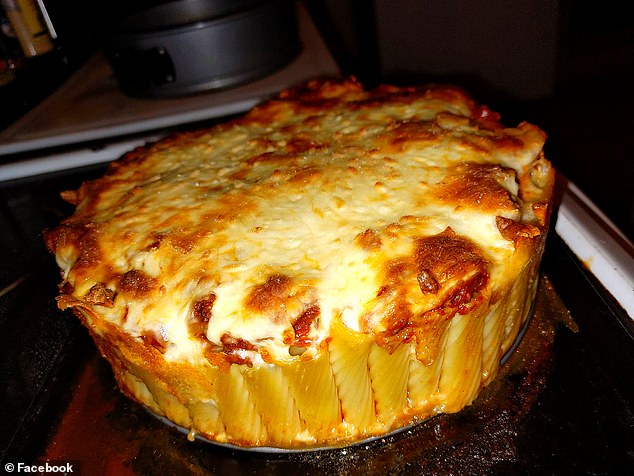 Once combined, she said she seasons the mixture with salt, pepper, a selection of herbs and spices and a pinch of sugar to enhance the flavour.

The woman then cooks a full box of rigatoni in boiling water and arranges the pasta standing up in a well greased cheesecake tin.

She said she stuffs the pasta with whole slices of mozzarella before pouring meat sauce over the top and sprinkling it with shredded mozzarella.

The pie should be baked in the oven at 180 degrees Celsius until the cheese has melted to a crisp, golden brown.

Photos of the dish, which have racked up 1,700 ‘likes’ and hundreds of shares since they were uploaded to Facebook on April 10, have set mouths watering across Australia.

‘What is this sorcery!? This looks amazing!’ one woman replied.

‘That looks delicious,’ said a second, while a third added: ‘Incredible.’

A fourth wrote: ‘You had me at rigatoni.’

Others vowed to try the recipe themselves.

1. Brown the beef, then drain fat.

2. Add tinned tomatoes and tomato paste, seasoning with salt, pepper, your choice of herbs and spices and a pinch of sugar to enhance the flavour.

3. Cook pasta in boiling water and arrange standing up in a cheesecake tin, greased well with cooking spray.

4. Stuff pasta holes with sliced mozzarella, then pour beef and tomato mixture over the top.

5. Sprinkle shredded mozzarella on top and bake in the oven for 25 minutes at 180 degrees Celsius.