Facebook has banned the sharing or viewing of our news articles on its platform. For independent journalism straight from the source, download our app and sign up to our newsletters.

A special investigations board at the Australian Federal Police discussed the alleged rape of Brittany Higgins on February 11 this year, triggering formal advice to Home Affairs Minister Peter Dutton about her case.

The board, chaired by deputy commissioner Ian McCartney, considered the case five days after Ms Higgins contacted the police about a complaint she had first lodged in April 2019. 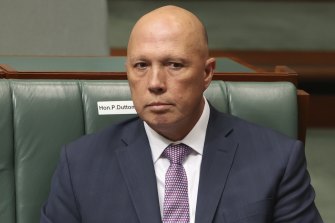 Home Affairs Minister Peter Dutton was told about the rape allegation before the Prime Minister.Credit:Alex Ellinghausen

The moves meant Mr Dutton knew crucial details of the matter one day before media inquiries were made to the office of Prime Minister Scott Morrison, raising new questions about why the leader of the government was not told earlier about the alleged assault in a ministerial suite.

The revelations come as Defence Minister Linda Reynolds undergoes checks in a Canberra hospital after suffering a recurrence of a pre-existing medical condition that led her to contact her cardiologist and take medical leave.

A spokesman for Senator Reynolds said late on Wednesday said she was resting comfortably and expected to remain in hospital overnight.

The emergency led Senator Reynolds to cancel a speech to the National Press Club three hours before it was due to start, while also asking her cardiologist to speak to Mr Morrison to assure him about her condition.

Senator Reynolds’ admission to hospital came the morning after she had been forced to correct a statement to the Senate about her meetings with the AFP over the alleged rape.

Mr Dutton told Parliament on Wednesday the AFP told him of the case on February 11 but he did not elaborate on what he was told and he was not asked whether he had passed any of the information to the Prime Minister’s office.

The response raised more questions about when the government knew of the case, given statements that Mr Morrison’s office took media queries about it on February 12.

Mr Morrison has told Parliament several times that he found out about the alleged rape when it was reported in the media on Monday, February 15.

Labor leader Anthony Albanese has expressed disbelief in some of the government claims amid speculation about how Mr Dutton came to be told before the Prime Minister.

A source aware of the steps taken by police, but who was not authorised to speak publicly about the matter, said Mr Dutton was told of the case by AFP commissioner Reece Kershaw on February 11 under guidelines that require the minister to be told of sensitive cases.

The commissioner contacted the minister after a meeting of the Sensitive Investigations Oversight Board, a group within the AFP that meets to decide whether cases require an alert to senior authorities such as the minister.

The AFP guidelines for ministerial briefings on investigations state that ministers must be told of any matters when media attention is reasonably likely.

Mr McCartney, the deputy commissioner in charge of investigations, chaired the SIOB meeting with other senior AFP officers and the group decided the minister needed to be told.

The AFP commissioner, who is not on the board, acted on the decision the same day.

The SIOB meeting came after Ms Higgins contacted ACT Policing, a part of the AFP, on February 6 to say she wanted to re-engage on a complaint she had made soon after the alleged rape.

The alleged rape took place on Saturday, March 23, 2019 in the office of Senator Reynolds, where Ms Higgins and the alleged perpetrator both worked. The man was fired on the subsequent Tuesday.

Ms Higgins has said she told others in Parliament House of her rape within days, including in a meeting with a police unit in the building on the Wednesday.

But there is uncertainty over the timing of some of these steps, with the initial complaint to ACT Policing made on April 1. On that day Ms Higgins also had a meeting with Senator Reynolds and the minister’s chief of staff to tell of the alleged rape.

ACT Policing confirmed the initial complaint was made on April 1, 2019. It said on Wednesday night it is now investigating the alleged assault after a report was made.

The Sydney Morning Herald and The Age asked Mr Dutton’s three press secretaries why he did not tell Mr Morrison of the case on February 11, but they did not respond before the deadline for this report.

Labor sought to link the questions over what the Prime Minister’s office knew about Ms Higgins’ allegations with other reports of inappropriate behaviour by a staff member of newly-independent MP Craig Kelly, who quit the Liberal Party on Tuesday.

The vote was also intended as a test of the new finely balanced parliamentary numbers after Mr Kelly’s defection.

However, the government won the vote 65-56. Mr Kelly and independent Bob Katter backed the government and Labor was down a vote after backbencher Josh Burns was ejected for interjecting.

Crossbench MPs Andrew Wilkie, Zali Steggall, Rebekha Sharkie and Helen Haines opposed the government gagging debate on the matter but abstained from the final vote, walking out of the chamber as a group.

The quartet has a general rule of not playing political games or supporting motions that use the word “condemn”.

Ms Steggall saw merit behind the issues Labor was raising and said the government’s response had been insufficient.