How to navigate tricky relationships at Christmas

It happens every year. You gather with your family for a Christmas meal and even before the prawns come out –Ka-boom. Dirty glances are thrown, the dog runs from the room, and your mother becomes disconcertingly quiet.

It’s why clinical psychologist Tamara Cavenett starts seeing her office waiting room pile up with clients in the month leading up to Christmas. 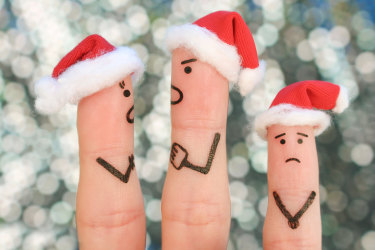 “[People] need to accept that they can’t control the other people in their family,” says clinical psychologist Dr James Collett, adding that many of us try nevertheless to do so, and particularly around Christmas.Credit:iStock

“Usually anger is what you see the most of,” says Cavenett, president of the Australian Psychological Society, about clients who struggle with family relationships around Christmas and start to feel stressed that upcoming family events might end in tears.“I have had people in the past who have not gotten over, for a year or more, what happened on Christmas day, either what was said, or who was or wasn’t invited [to a Christmas function],” she says. “Often people will say, ‘I wasn’t important enough for them to see me’.”

If this is you, you’re not alone. Why is it that the Christmas period is such a tinder keg for families?

“It’s a milestone, one of those dates that really just arbitrarily divides time up, but we look at it [as] a time to take stock, and that’s why I think we all see a lot of this happening,” says Dr James Collett, a psychology lecturer at RMIT. Because this time of year inspires people to compare themselves to their loved ones – who’s achieved what, who’s bought a more elaborate present – it frequently brings on hurtful judgment and its corollary, defensiveness and attack, he says.

“For most families it’s around control,” says Collett, a clinical psychologist. “So one of the common things you hear [from clients] is ‘They’re always doing this’.”

What “this” is varies from family to family. It frequently takes the shape of advice given about a person’s lifestyle, or a comment that a person should have achieved more (“Why are you still studying?” , have a different and more prestigious job, or have procreated already.

“It does telegraph disappointment,” says Collett, noting that clients on the receiving end of such comments frequently feel sadness, anger and shame.

“I’ve encountered that multiple times with clients,” he says of the last example. “‘When are the grandchildren coming?’ That sort of thing… It wears people down, and then we [clients] get drawn into this cycle of trying to change [the family member who makes the comment], usually in an unhelpful way… and things continue to snowball.”

At the heart of many family conflicts at Christmas, he adds, is the expectation that the holiday – so hyped in the lead-up with Mariah Carey songs on an endless loop in shopping centres festooned with advertisements featuring joyous, Rolex-wearing families – should go off without a hitch.

“Christmas often attracts these perfect ideals… you compare it to the Hallmark card, whereas for more people it’s probably closer to National Lampoon,” he says.

Tamara Cavenett has seen this take a variety of forms: clients who expect widowed family members to be happy at Christmas and put aside their sadness, or people distressed because guests have turned up to their homes full from a previous function. And – a perennial – people who expect family members will celebrate a success they’ve enjoyed during the year.

“And they [others] just go ‘That’s nice’,” says Cavenett.

“Expectations are often what makes us angry,” she adds. “Where there are a lot more expectations, [there] is a lot greater chance of family conflict and disappointment and hurt.”

“Often what it’s coming down to… is not feeling accepted, and not feeling that your values are accepted,” he says.

So how are we to function this holiday season, let alone actually enjoy seeing our family?

“[People] need to accept that they can’t control the other people in their family,” says Collett, noting he uses acceptance and commitment therapy (ACT) to help them accomplish this. ”[With] family, maybe we’re a bit more predisposed to get drawn into that battle [of trying to change people].“

Cavenett teaches clients to be mindful in the lead-up – and during – the Christmas season.

“We get people to watch where their thinking goes and be able to channel its direction,” she says. “We can also get them to really look at what the potential consequences would be” – if they were to react emotionally – “and at times imagery can be really helpful, where you’re imagining yourself coping really well despite being baited.”

Clients can also, she says, communicate with tricky family members in the lead-up to seeing them, by saying, ‘“I know we’ve had problems on issue X, Y or Z; I really want to enjoy tomorrow and can we put it aside?’”

She also has a brilliant tip for how to side-step uncomfortable or painful conversation. If someone makes a comment about a topic that generally triggers conflict with you, respond vaguely about something completely unrelated. “[Like, ‘How is Johnny going at school?’ You’re not engaging in their comment, and you’re also making it very difficult for them to return to the same conversation. Their children is always a good [topic] because everyone is really vested in their own children.”

And don’t, she adds, underestimate the usefulness of a well-timed trip to the bathroom when you need to collect your thoughts or take a moment after Aunt Sally’s pointed comment.

They’re skills that all of us would do well to bone up on, considering this holiday season has the potential to be even more difficult than prior ones.

“So you know COVID has made us less able to cope, more exhausted, more anxious in general, more uncertain – and then we’re launching into a difficult time of the year,” says Cavenett.

But what of those people at the more extreme end, for whom Christmas is one of the few times during the year when they are forced to confront relationships with people who have been abusive or hurtful to them?

“The narrative is that we go home to our families and we spend beautiful time together, but for people who have traumatic histories with their families, the family is anything but a safe place,” says Dr Ruth Wells, a trauma specialist and clinical psychologist at The University of NSW. “So when they get back into those environments where they’re confronted with the reminders of difficult times… their ability to feel calm and together is really undermined.”

For those whose families are toxic and hurtful, people should ask themselves if they should perhaps exercise their right to not go to family functions, says Collett.

And for those who will be going, Wells recommends they suggest a Christmas function take place in a park or another neutral environment that is safe from physical reminders that trigger past trauma.

She also recommends ACT therapy and advises clients to bring an “ally” with them to a family function, or arrange for one to be on call, even by phone, for support. “So you might be able to say, ‘Look, I’m really worried about this family time coming up, could you just help me to stand up for myself? Or help to support me if things are getting really hard.’”

Those who are estranged from their families who don’t have a natural place to land over Christmas and who are worried about feeling lonely should strongly consider asking a friend if they can “crash” their Christmas get-together, Cavenett says. “People always feel a bit like, ‘I’m putting the host out’, but in fact as a host, it can feel like a beautiful gesture and a warm thing to do on Christmas day.”

Cavenett adds: “Just remember that the best part of Christmas day is you’ve always got an excuse to leave. You’ve usually got another event – or could have another event to go to. It gives you a nice out.”