How to watch the lunar eclipse in Melbourne

A blood moon is set to rise over Victoria as thousands turn to the sky to witness a lunar eclipse on Tuesday night.

Forecasted scattered thunderstorms in Melbourne may spoil the party for those hoping to catch a glimpse of Australia’s last total lunar eclipse until 2025, but the Astronomical Society of Victoria has a wet-weather plan, running a live stream from a range of locations across the state. 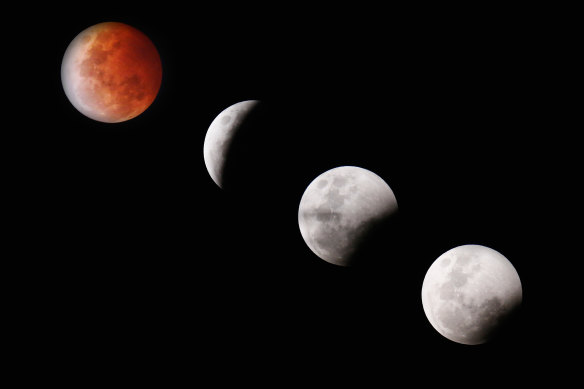 Victorians are set to witness another total lunar eclipse like this one, sighted in 2014.Credit:Darren Traynor

For those hoping to witness it with their own eyes, society president Mark Iscaro said an elevated location with no interruptions on the eastern horizon would give moon gazers the best vantage point.

“In urban and suburban Melbourne, there’s lots of buildings in the way,” he said.

Lunar eclipses occur when the sun, Earth and moon all line up, with Earth casting a shadow across the moon.

The best time to look skyward is between 8.30pm and 11pm AEDT, with the total eclipse to begin at 9.16pm.

A blood moon is very likely, but the hue it turns will depend on local atmospheric conditions: if there’s enough pollution, volcanic dust or cloud cover, the moon can appear quite red.

“There’s a very long period there and [you can] see the actual eclipse, where the moon looks pinkish, orangey or has a red hue,” Iscaro said.

He recommended wearing warm, comfortable clothing and said binoculars would be beneficial, but not essential for a good viewing of the moon.

Excitement is also mounting at Mount Burnett Observatory, east of Melbourne. Vice-president Jacquie Milner said there was no need for casual observers to purchase special equipment, encouraging viewers to take their time and enjoy the spectacle.

“That’s one of the nicest things about lunar eclipses: you don’t really need anything to see it,” she said. “You don’t need to rush, a chair’s probably the only equipment you’re going to need.”

Milner added: “To take a photo of the moon, smartphones are really good. It catches onto the brightness of the moon quite well.”

Iscaro said interest in astronomy was piqued every time there was an unusual event like an eclipse, crediting lockdowns for sparking fresh interest in celestial sightings. 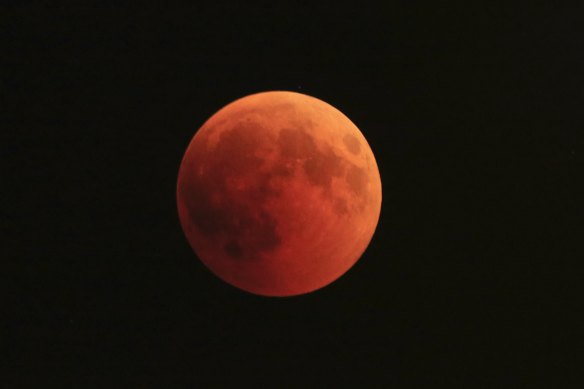 The colour the moon turns will depend on a number of local environmental factors.Credit:AP

Younger generations are also casting their eyes to the skies, while keen Victorian stargazers have already planned an interstate camping trip to Exmouth in Western Australia, hoping to witness what has been dubbed the Ningaloo eclipse in April.

The next total lunar eclipse visible in Australia will occur on the evening of March 14, 2025.