On the long conveyor belt of television reboots and revivals, few have been subject to the level of pre-premiere scrutiny applied to And Just Like That… Since the Sex and the City reboot was confirmed in January, rarely a week has gone by without a drip-fed update: leaked onset photos, rumours of returning cast members, yet another teaser trailer. 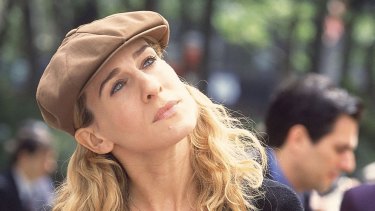 In the spirit of Carrie Bradshaw, I’ve done some wondering.

Perhaps it is a testament to the legacy of the original that we have such an appetite for And Just Like That… before it’s even arrived. Sure, we loved Will & Grace and Full House and when they received the reboot treatment we watched with a nostalgic curiosity, but Sex and the City always meant more.

Debuting in 1998, the show about four best friends living, working, and having sex in New York City gave HBO its edge. For six seasons, we watched in awe as these seemingly fearless women stepped over boundaries, one Manolo Blahnik at a time.

When the series ended in 2004, the foursome had become a kind of yardstick for measuring the modern woman: So are you a Carrie, Samantha or a Charlotte? Wait, you’re such a Miranda!

As a result of its influence, Sex and the City has been held to a higher standard, making the two film outings such a bitter disappointment. Sex and the City 2’s dumpster fire in Abu Dhabi remains a cinematic low point and triggered a more critical take on the legacy of the series.

This brings us to And Just Like That… which presents an opportunity for Sex and the City to re-establish itself in the pantheon of great TV series. But a show that hinged itself on its relevancy won’t get off lightly. Here’s what we should expect from a show that allowed us to expect so much from it.

A Samantha storyline, even without Samantha

Arguably the most noise surrounding And Just Like That… stemmed from who was not returning: Kim Cattrall. Following a highly publicised falling out with Sarah Jessica Parker, Cattrall was never slated to reprise Samantha for the reboot. “I think she [SJP] could’ve been nicer. I don’t know what her issue is,” Cattrall told Piers Morgan in 2017. 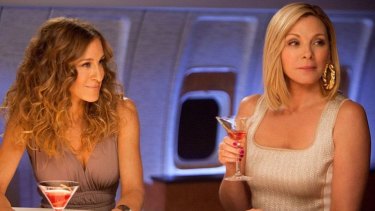 Kim Cattrall, who played Samantha Jones in the hit series, will not be returning for the reboot. Credit:HBO

Onset sources have claimed the character has “moved to London”, which explains her absence. But given the show was built on the foundations of friendship, audiences deserve more closure than “she is seven hours away by plane.”

Awareness that the world consists of more than white women

For a show set in New York, Sex and the City was remarkably white, a point the cast have acknowledged ahead of the reboot. “The incredible lack of diversity was the Achilles heel of the show, the first time around,” Cynthia Nixon told Vogue earlier this year.

And Just Like That… will look to right this wrong, casting three women of colour – Nicole Ari Parker, Karen Pittman​ and Sarita Choudhury – in lead roles. Former Grey’s Anatomy star Sara Ramirez joins the cast as a nonbinary, queer stand-up comedian who hosts a podcast on which Carrie appears.

Carrie appearing on a podcast makes complete sense; much of her narration felt podcast–y long before the medium existed. It will be curious to see if the writers tackle Carrie’s position in the contemporary media landscape. Her career was always a bone of contention for fans: how does she afford an enormous New York apartment while writing one column a week (even with the insane freelance rate of $4 per word)?

For those who made it through the film Sex and the City 2, you’ll recall Miranda (Cyntha Nixon) quit her job at a law firm in the opening minutes. Given the audience, And Just Like That… would be wise to use this plotline as a way of examining the hurdles women over 50 still face in the workplace.

Sex was central to the original show (it is in the title, after all), so it needs to be part of And Just Like That… The departure of Samantha – who bore the brunt of the sex scenes – opens up the door for Miranda, Charlotte (Kirstin Davis) and Carrie to explore what sex looks like in your 50s. No doubt Carrie would have also taken a keen interest in the upheaval that followed the #MeToo movement. Fingers crossed, the conversation about sex extends outside the bedroom.

Enough nostalgia, but not too much

The backlog of history is a double-edged sword for any reboot. Ignore the origins and risk losing the fans or lean too hard on nostalgia and the show becomes a cheap imitation of what it once was. We already know that Carrie’s two great loves, Big (Chris Noth) and Aiden (John Corbett), will both appear, and that seems to make sense. But if we end up in Aleksander territory (or worse, Berger), I will have no choice but to give the reboot the Post-It treatment. I’m sorry, I can’t, don’t hate me. 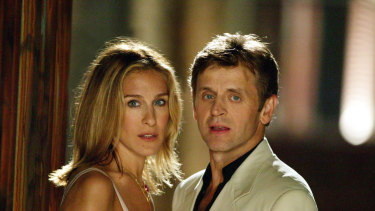 We can handle Big and Aidan, but spare us the return of Carrie’s former flames including Aleksandr (Mikhail Baryshnikov).Credit:HBO

Ultimately, if And Just Like That… is to become a success in its own right, it will need to cherry-pick reminders of what came before (yes, the famous tutu is returning) while moving the story and the characters forward.

As Carrie once narrated, “Maybe the past is like an anchor holding us back. Maybe, you have to let go of who you were to become who you will be.”

And Just Like That… is on Binge from December 9.