‘I thought, I can’t possibly stab these kids’: Kefu’s humanity in face of horror

Some dates cast a long shadow over a life, punctuating its fortunes, directing its currents. Bestowing blessings and afflictions. For decorated Wallaby Toutai Kefu and family that date is August 16.

It was the day that, in 2003, a monster hit from All Blacks freight train Jerry Collins ended Kefu’s Test career and New Zealand took back the Bledisloe Cup, never to return it. It was also the day Kefu’s wife Rachel birthed their third baby, a daughter they called Madison. 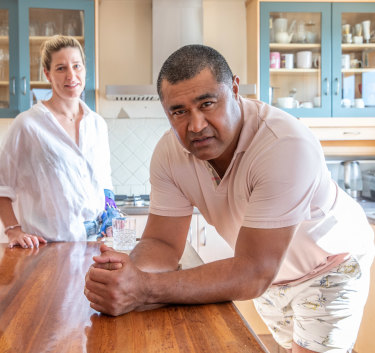 Toutai Kefu and wife Rachel, in their Brisbane home.Credit:Paul Harris

This year, August 16 was the day Madison turned 18. The Kefus – Toutai, Rachel, older children Joshua and Olivia, younger children Lucia and Isaac – planned to celebrate Madi with dinner and cake at home in Brisbane that night.

But at 3am, as Madi lay sleeping downstairs in a room next to her big sister Olivia, Rachel was woken by noises somewhere in the house. What unfolded over the next 10 minutes – a violent and bloody home invasion over which four teenagers have been charged with attempted murder – has changed their lives.

There was blood everywhere at this stage, it was unbelievable.

“Rach heard something and she turned the light on in the hallway in our room and looked over the balcony downstairs,” he told the Herald in an interview for the Please Explain podcast. “It was quiet. She stood there for 10 or so seconds. She went back to bed, turned the light off, then she heard something again. She went downstairs thinking it was a possum … we’ve had possums in the house before.

“She’s gone downstairs confronted by these two young kids, so she screams and then starts yelling at them. I’ve heard the scream and I’ve got up, ran out of our bed, I’ve actually jumped over the balcony from the second floor down to the first floor, where the front door is … I broke two bones in my foot, I didn’t find out until later in the week.

“I’ve landed, I’ve run in and seen them and my wife was just backpedalling. I’ve jumped in between my wife and [the two young kids]. One had a sickle, a kind of a bent machete, and the other guy had a little knife. We walked back past the front door, we said ‘There’s the front door, cut your losses boys, go’. They were young kids, I was shocked to see how young they were.

“The bigger kids kept lunging at us and we kept ducking away. He lunged and got Rach on her arm. I had a knife, I put the knife down and I’ve grabbed a stool and basically charged them and then we wrestled. My son (Joshua) has come down, we wrestled with one each. 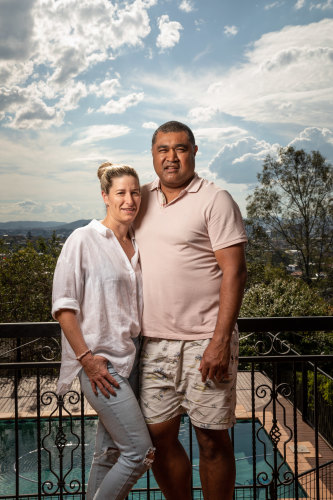 “There was blood everywhere at this stage, it was unbelievable. The police that came in could not believe the crime scene.”

Kefu says it has changed the way they live. “We won’t be the same,” he says.

There are the physical scars. Rachel has nerve damage in her dominant arm. Joshua has 40 stitches in his back encouraging a large flap of flesh to reattach itself. That day the rugby world and the Brisbane community woke to news Kefu was fighting for life after one of the boys sliced his liver with a frenzied swipe of a knife. Madi was also hurt. The four of them spent August 16 in surgery.

But Kefu is also referring to the emotional damage wrought by the events of that morning. The nightmares his children have, the tears that flood their faces at unpredictable moments, the insomnia.

“The professionals say the stuff we’re experiencing is quite normal,” he says. “We don’t sleep well. If we hear something we’re up. They say that’s normal, with time it will get better. We all still have our sense of humour about it, we try and talk about it. I talk to my psychologist … Rachel talks to someone once a week. The two eldest kids have requested to see one, so we’re going to organise that. We’re all going OK.”

Kefu, a fearsome competitor on the field in his 60 Tests for Australia, says he feels heartbroken over the attack. He watched one of the teens lunge at his wife with a knife, slicing through tendon and muscle to the bone. They swiped at Madi as she tried to run past them to the front door, to safety. As Kefu grappled with one of the boys, a second hacked into his son’s back with a sickle.

He admits, swallowing tears, that Joshua “looks at Sudanese different now”. Another byproduct of the crime. All Kefu feels is sadness. Even in the midst of the chaos, after Rachel was hurt and the 47-year-old knew it was time to fight, he put down a knife and picked up a kitchen stool.

“But no one died, we’re still alive. Those kids … They’ve been brought up differently … I feel sorry for them. They’re not going to have the same life my kids are going to have. We should pray for them.”

Kefu’s humanity has always been close to the surface, even as a 113 kilogram, 191-centimetre rampaging No.8 who won a World Cup and two Bledisloe Cups. Former Wallabies coach Eddie Jones made Kefu his vice-captain and told the Herald he and George Gregan were the team’s spiritual leaders. “Particularly after defeats he would stand up and lead at training,” Jones says.

Perhaps there was a moment of recognition as Kefu stared into the eyes of his attacker that morning. The Kefus were a strong, close, church-going family and the four boys rarely stepped out of line. But growing up Tongan in 1980s Brisbane wasn’t a simple equation. 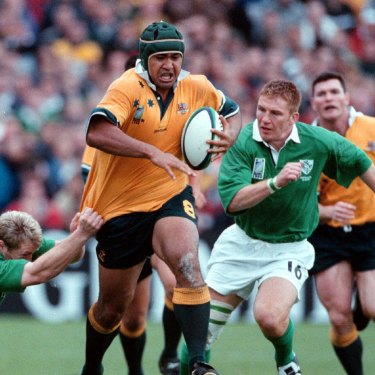 ‘Australia’s last genuine No.8’: Toutai Kefu in action for the WallabiesCredit:Tim Clayton Smith

“We were one of the first Tongans there. Back then, rugby’s a middle-class, upper-class sport, only in private schools. It was new to people to have some Polynesians running around. What we encountered back then you don’t encounter now. For us back then, there was only a few of us. There were some hardships,” he says.

“You grew a thick skin and got on with it. People weren’t used to that, didn’t know Polynesians, never spoke our language. It does affect you but you move on. They don’t know, they don’t understand us. For us, it was a great opportunity for us to be here so we sucked it up, thick skin, moved forward.

“I was a pretty handy player back then. Sometimes it was better to stay in the background and not touch the ball, sometimes you become a target because you’re scoring a lot of tries. We handled it pretty well. The way we handled racism was we ignored it, we didn’t talk about it.”

Thick skin and a warrior’s heart, with the skills of a back honed on basketball courts as a Queensland junior representative. Kefu made his starting debut in a 76-0 annihilation of England in 1998 and became a mainstay of the Wallabies back row under Rod Macqueen, John Connolly and Eddie Jones. In 60 Tests he started 52, endearing himself to rugby fans with his skill, abrasiveness and that 80th-minute try against the All Blacks in 2001 to win the Bledisloe Cup and send captain John Eales out a winner in his farewell Test.

”I know about his fighting characteristics because I almost lost the lineout and lost the ball there (in the 2001 Bledisloe),” Wallabies second-rower Matt Cockbain told Fox Sports as Kefu was on the operating table two months ago.

“There was no one else that was going to win that game and the story is that Ealesy owed him beers for the rest of his life. I don’t know if he ever paid up on that, Ealesy. That period, where we had all that success, Toutai was a massive part of it, as much as a John Eales or a George Gregan or a Stephen Larkham, he was a consistent member of that side.”

Until that day in 2003. August 16, when New Zealand No.8, the late Jerry Collins, hit Kefu with such force in a tackle that it cracked his shoulder blade. It was one of those rain-soaked afternoons at Eden Park in Auckland. The crowd were encouraged to wear all black to the match to help the All Blacks snap Australia’s five-series winning streak in the Bledisloe Cup. It worked.

Kefu was still recovering from spinal concussion sustained against the Springboks. His collision with Collins – “the cement truck, we used to call him” – ended his dream of defending the Webb Ellis Cup in the World Cup at home later in the year.

“When I went for scans on the shoulder the guy said ’Only people in car accidents get this kind of [injury]. That guy must have hit you hard,” he says.

Afflictions and blessings. Madi was born at 11pm that night and the anticipation of holding his newborn daughter helped numb the pain when Kefu caught the early flight home alone the next day.

It’s not clear yet whether the Kefus will glean any blessings among the rubble of the traumatic events of August 16, 2021. Their two youngest children, Lucia and Isaac, who woke their big brother so he could run to his dad’s side, were forced to hide upstairs and listen to the horrors unfold below. Noises at night bring sickening dread. Kefu, the Tongan Test coach, has withdrawn from his team’s three-Test spring tour, including a heavyweight clash with England, to be home for his family. Rachel faces a year of painful rehabilitation and may never regain full use of her arm. Objectively, it’s been a bad couple of months. 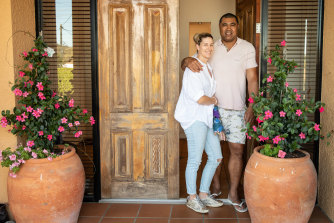 Rachel and Toutai Kefu were asleep when the teens broke into their home.Credit:Paul Harris

Friends of the Kefu family tell the Herald they are a strong mob. Full of life and love and humour. Finding the funny side is getting them through.

“As a family we think back to things we did that night and we have a bit of a laugh,” Kefu says. “My daughter was running around when the ambulances arrived, ‘It’s my birthday, it’s my birthday and this has happened!’. She would have had about five cakes in hospital that week and she still talks about how [she] didn’t really have a proper birthday.

“We’re a normal family, there’s plenty of banter. We laugh about a lot of the stuff that happened that night, it helps us. We’re all going all right.”