Madeleine Martiniello wasn’t the first person to ask Franco Cozzo if she could make a film about him, but she was the first to whom he said yes.

“Well, he didn’t say yes straight away,” the 32-year-old director of Palazzo di Cozzo clarifies. “It was a little bit of a dance. It took a few weeks for him to come back with a yes.” 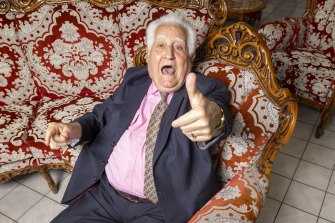 And why, signore Cozzo, did you say yes? “Because she’s a genuine woman, and I did no mistake,” he says. “Remember, south of Italy, CAN’T GO WRONG. She’s a beautiful girl to me, and I think to everybody. I’m going to say the truth. If not, God punish me.”

Cozzo is sitting on one of his trademark rococo lounge suites (what else?) in his massive showroom in Footscray, a site he says he bought for $80,000 in 1970 and sold in 2018 (after a protracted on-again off-again dalliance with suitors) for $7 million. He’s now renting it back while the developer gets things in order for another apartment block like those that have sprung up all around.

“I sold this because I NEED THE MONEY,” he says. “No bullshit. Two years I don’t do nothing [because of the lockdowns], the bank account come overdraft, boom. I don’t want to have a scandal. The name is too big to have the scandal.”

The name is big, thanks to the cheap TV ads he made in the 1980s and ’90s in which he delivered his hand-waving pitch in three languages (Greek, Italian and English). “Megalo megalo megalo … Buy from Franco Cozzo! Today, tomorrow, always! In Brunsawick, Norta Melbourne and Footisgray.” 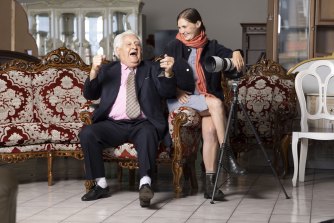 Director Madeleine Martiniello admits that after four years of working on the film she became close to her subject, and now considers him and his wife Assunto friends.Credit:Wayne Taylor

The North Melbourne store is long gone, Footscray soon to follow, but Brunswick will keep trading. He may be 85, but Franco Cozzo isn’t done yet.

To me, he says: “If you ever look inna your background, you must have summa wog.”

“Becausa the way you dress.”

Martinielli’s movie is both portrait of the man and social history of migration in Melbourne, and it’s a delight. It traces Cozzo’s journey from Sicily, where he worked with his father breaking horses, to the promise of a better life in Australia. He was 21 when he arrived in January 1957, but he’d been dreaming of it for years.

Cozzo fancied himself an artist of sorts, but selling was his natural medium. By 1968, he’d become successful enough that he was able to produce the variety show Carosello, the country’s first-Italian language TV program. By the ’80s he was taking a more direct approach to promotion, putting himself front and centre in the ads that made him a cult figure in his hometown.

Martinielli spent four years working on the film, finishing it mid-year just two weeks before she gave birth to her first child (she’s brought the bambino along to the photo shoot so Franco and wife Assunto can finally meet him). “You always want to maintain some sort of professional relationship with a subject in a documentary,” she says. “But it’s hard not to become quite close. I would say we’re friends now.”

That closeness was tested, though, when Martiniello brought up Cozzo’s son, Luigi (aka Lou), who was convicted in the 1990s of selling drugs hidden in furniture at the Footscray store. That scandal fuelled rumours that the operation was a mere front for a drug business – rumours Cozzo vehemently denies.

“He got pretty riled up,” she says of the on-camera interview. “It was hard for him to talk about but at the end of the day he understood you can’t ignore something that big that everyone knows about and wants his perspective on.”

It’s right that the film goes there. But it would be a shame if that’s all people took from it, or from the Franco Cozzo story.

He is the immigrant par excellence in some ways, true to his roots but grasping opportunities the new land offers. He owned his difference, celebrated it, and was (largely, eventually) celebrated for it.

“I’m pleased to have this personality and to stay in the memory of the people,” he says. “The public, I no say love me. They really, really like me. No matter who you speaking to, ‘Franco Cozzo is my friend’.”

In the end, it’s that reputation that matters most. “I’m proud,” he says. “Money is nothing.”

Palazzo di Cozzo is in cinemas around the country from Thursday, November 25. Details: sharmillfilms.com.au