Prime Minister Scott Morrison says an inquiry into which staff members in his office were aware of Brittany Higgins’ rape allegations has resumed.

Ms Higgins, a former Liberal staffer, claimed she was raped by a colleague inside Parliament House in the office of the pair’s then boss, cabinet minister Linda Reynolds, on March 23, 2019. 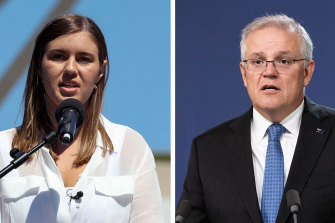 Prime Minister Scott Morrison said inquiries into who knew what in his office about Brittany Higgins’ claims had resumed.Credit:Dominic Lorrimer, Brook Mitchell

She told Senator Reynolds about the alleged sexual assault on April 1 but asked her not to report the matter to police.

There have been contradictory claims about when the Prime Minister’s office was first alerted to the incident.

In March, Phil Gaetjens, the secretary of the Department of Prime Minister and Cabinet, paused the investigation into who knew what about the matter inside the Prime Minister’s office after speaking to Australian Federal Police (AFP) Commissioner Reece Kershaw.

Asked on the ABC’s 7.30 program on Wednesday night if the AFP had given the inquiry the go-ahead to recommence, Mr Morrison said “yes”.

Mr Morrison said he hoped the report would be completed soon.

“[Mr Gaetjens] hasn’t given me a date at this time but I would hope that he can provide one at the earliest opportunity,” he said.

“I know it’s commenced but I have no knowledge of its conduct, why would I?”

Mr Morrison said he was told about the rape on Monday, February 15 and his office was alerted three days earlier.

Mr Kunkel is likely to meet Ms Higgins, whom the prime minister met on April 30, as part of that investigation.

“He’ll be having a conversation with Brittany herself that was arranged not long after I met with her just a little while ago,” Mr Morrison said.

“I found that a very, very helpful meeting and I thank her very much for the opportunity to discuss, not that issue, that didn’t come up, but the many other issues,” he said. “She’s been very brave coming forward.”

Support is available from Lifeline: 13 11 14 and lifeline.org.au