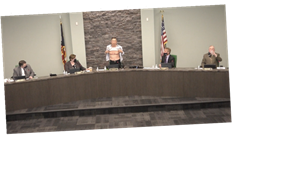 At a board meeting for West Chester Township, a suburb of Cincinnati, a board member did something powerful: He took off his suit jacket, tie and shirt to bare his scars. Lee Wong, the chair of West Chester’s board of trustees, did it to prove his patriotism, he said.

Wong, who said he is 69, explained that he came to the U.S. when he was 18 and has spent more time living here than anywhere else, and is U.S. citizen.

“You know, I didn’t come to this country to be sitting here, an elected official,” he said. “As I said before, an unfortunate event happened to me when I was a couple years in the country. In Chicago, I got beat up. As I said before, he went to court and never got punished.”

“For too long, I have put up with a lot of s*** in silence — excuse the language — too afraid to speak out. Fearing more abuse and discrimination” he said. “Then when I came out of the Army, I said, ‘I’m going to make it a better community, wherever I live.'”

Wong said he does his best to do what is right, but in the last few years, things have gotten “worse and worse,” and despite being loved in the community, “there are some ignorant people” that will say he doesn’t “look American or patriotic enough.”

He acknowledged that others experience similar racism too. “They are hard working, American, hard working people,” he said. “Law-abiding citizens, some even serve in the U.S. armed forces of America.”

“People question my patriotism, [say] that I don’t look American enough, they can’t get over this face,” he continued, as he stood to lift his shirt. “I want to show you something, because I’m not afraid. I don’t have to live in fear, intimidation or insults.”

“I’m 69 years old, and I’m going to show you what patriotism looks like,” he said. He then showed his “proof” — the scars he sustained in the military — asking, “is this patriot enough?”

“Is this patriot enough?” West Chester, Ohio, trustee Lee Wong lifted his shirt at a town hall meeting Tuesday to bare vicious scars from his service in the U.S. military, as he called for an end to racial discrimination and violence against Asian Americans.

Wong said he’s not afraid to walk around anymore and admitted that he could have mindless bias. “But, you know, prejudice is hate. And that hate can be changed, we are human. We need to be kinder, gentler to each other, because we are all the same.” Wong then excused himself from the meeting.

The town had recorded the meeting, which took place on March 23, and Wong’s speech soon gained traction online.

His powerful speech reminds Americans of the pain Asian Americans face, especially as hate crimes against them have surged nearly 150% in 2020, according to a study based on police department statistics across major U.S. cities.

The growing number of anti-Asian hate crimes reflect a growing trend of discrimination against Asian Americans during the coronavirus pandemic.

Last week, advocates held a “National Day of Action and Healing,” a movement to protest anti-Asian violence in the wake of the March 16 mass shooting at three Atlanta-area spas, during which women of Asian descent were among the eight people killed.

Demonstrations across the country continued over the weekend to raise awareness about racial discrimination that Asian Americans have experienced for decades.

On Thursday, Wong told Cincinnati-based publication The Enquirer why he decided to share his scars at the meeting. “The timing was right in light of what’s happening in this country,” he said.

Wong said the moment was unplanned: “In that moment, I don’t know what came over me. I just knew I had to say something.” CBS News has reached out to Wong and is awaiting response.

Li Cohen contributed to this report.