‘It’s just like watching the real thing’: Sir David Attenborough says of his new series Prehistoric Planet which brings the dinosaurs back to life by pairing scientific detail with stunning special effects

On a remote beach, newly hatched turtles are scrambling through the sand for the safety of the water. But they’ve been spotted by a predator.

Stalking on its long hind legs, the hunter approaches with curiosity. Its talons are like machete blades, its teeth like daggers.

But it’s a juvenile itself and has never seen a turtle.

The baby Tyrannosaurus rex places one tentative claw on a turtle and watches in bemusement as it wriggles free. Alarmed, Tiny Rex runs up the beach, back to the safety of its parent – a fully grown male Tyrannosaurus, 40ft long and weighing ten tons. 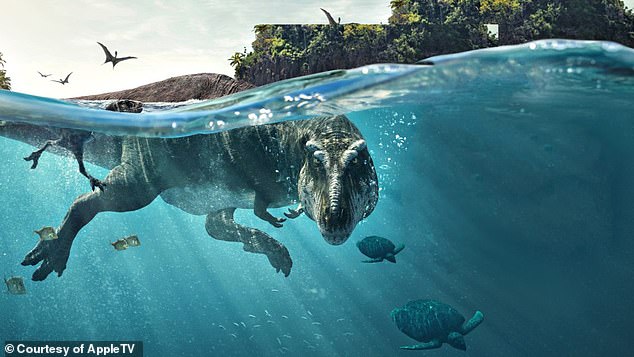 A T-rex swimming. BBC Studios Natural History Unit and a team of special effects wizards have recreated dinosaurs from 66 million years ago

The father nuzzles his infant, rubbing the sides of his jaw along the baby’s furry flanks, and then gives him a nudge, urging his offspring to try again, as if to say, ‘Go on, it won’t bite.’

As touching as it is astounding to see, the scene is made perfect by the voiceover – from the doyen of wildlife narrators, Sir David Attenborough. ‘He’s got the killer instinct,’ chuckles the great broadcaster, as he watches the dinosaur’s clumsy attempts to catch a snack, ‘but his problem is inexperience.

‘This could take some time.’ After recording his commentary, Sir David takes off his headphones and sits back in amazement. ‘It was like I was watching them through a pair of binoculars,’ he marvels.

The clip is part of Prehistoric Planet, the most ambitious series about dinosaurs ever made. A collaboration between BBC Studios Natural History Unit and a team of special effects wizards headed by Emmy-winning producer Jon Favreau, who’s directed Marvel films (and appeared in them as Iron Man’s friend Happy Hogan), it re-creates dinosaurs from 66 million years ago, shortly before a meteorite hit the Earth and wiped them out. 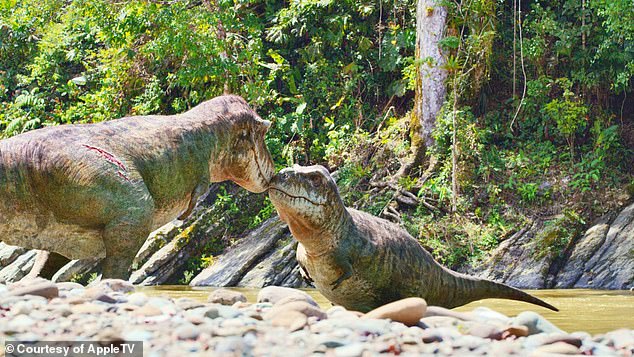 A father and child nuzzle each other. The new series features numerous prehistoric animals whose existence was only recently discovered, alongside some of their extraordinary behaviour

The accuracy of the scientific detail and the high-definition images make this five-part series coming to Apple TV+ a giant leap forwards from CGI depictions such as Walking With Dinosaurs in 1999 and Jurassic Park in 1993. ‘When people first discovered dinosaur fossils, they thought they were dragons,’ says series producer Mike Gunton, who was behind hit series such as Planet Earth II and Dynasties.

‘Our aim was to bring what we now know to the screen. This is more than a TV show. It’s a piece of seminal science.

‘We’ve drawn together threads of science, like Sherlock Holmes pulling together the clues in a mystery. This is not a jaws-and-claws show. It’s about the world that existed – Planet Earth, 66 million years ago.’

Aimed at a broad family audience, the series features numerous prehistoric animals whose existence was only recently discovered, alongside some of their extraordinary behaviour. 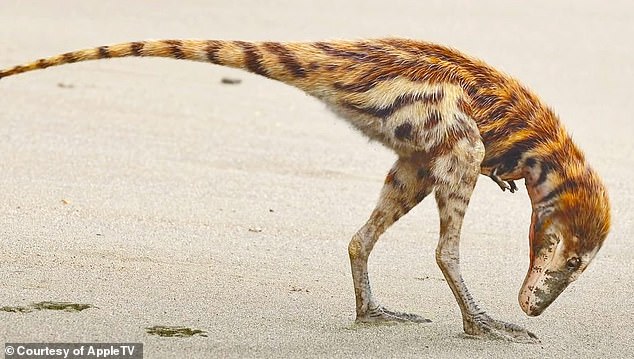 A striped baby T-rex. Aimed at a broad family audience, the series features numerous prehistoric animals whose existence was only recently discovered, alongside some of their extraordinary behaviour

Take, for instance, the T-rex. The juvenile on the beach is almost unrecognisable from the plastic toys of previous generations.

It has a pelt, for a start. Scientists are still debating whether the follicles on its body were fur or feathers, or something between.

It appears they shed this coat as they approached maturity. As babies, though, they may have had a tigerish black-and-ginger hide which gave them camouflage to hide them from predators.

One of the show’s many shocks is that different species of Tyrannosaurus existed during the Cretaceous period, the last of the dinosaur eras. Fossils of Qianzhousaurus were identified in southern China nearly ten years ago.

Referred to as ‘Pinocchio Rex’ due to their long snouts, they were swift runners. Another relative, Nanuqsaurus, lived in the polar north, probably with a thick coat of feathers to insulate it from the cold.

Fossil records also reveal that some Tyrannosaurs were confident swimmers, using their tails and hind legs to propel themselves through water.

Perhaps the most amazing sequences in the series are those that show mating displays, including an airborne battle between great winged Barbaridactylus pterosaurs for the affections of females waiting below. When it comes to T-rex love, their snouts are thought to have been packed with nerve endings, making them as sensitive as a dog’s nose.

Scientists believe they rubbed muzzles as a sign of affection during courtship. ‘These animals were not blank boxes,’ says Mike.

‘They were characters. They made decisions.’

Generations of children have wondered why Tyrannosauruses had such short forearms. Prehistoric Planet provides an answer, taking inspiration from birds, the evolutionary descendants of dinosaurs.

Many bird species use their brightly coloured wings in mating displays. It seems likely that Tyrannosauruses did the same.

The clue is that those forearms have ball-and-socket joints in the shoulders, allowing them to twist and waggle. Lurid scaly blue skin inside their wrists and elbows made for a dramatic sight when they flashed it in a mating dance.

Another dramatic discovery based on bone structure enables the team to show how sauropods, the largest dinosaurs of all, stood on their hind legs to battle for dominance. These long-necked behemoths, such as the diplodocus, had reinforced pelvises.

Scientists think this enabled them to take their weight when they reared up. Fossil evidence shows some suffered scars to their necks, caused by the teeth of a rival raking at them.

To make the show as realistic as possible, Mike insisted on framing every shot as if it was any other wildlife film. ‘With CGI, the camera could fly between the legs of a T-rex or hover by its open jaws.

‘But that looks wrong. A real-life wildlife cameraman couldn’t do that.

‘He’d be eaten. We wanted every shot to look like it was filmed in the wild.’ 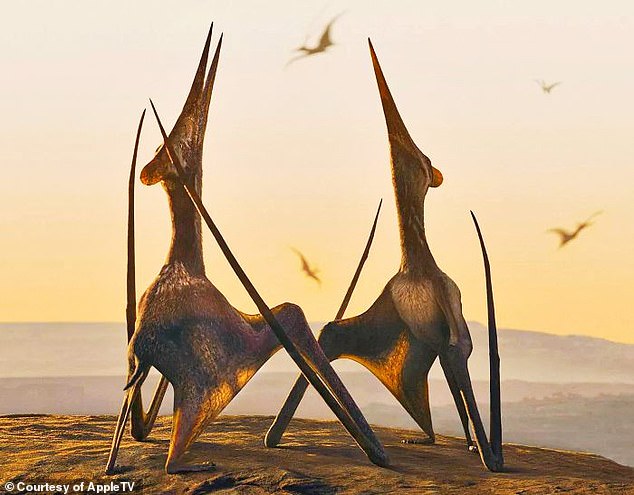 The show’s CGI Barbaridactylus pterosaurs. The five episodes take us to forests, fresh waters, deserts, coasts and icescapes. The backdrops are real, filmed around the world, so CGI animators could drop their creations into real landscapes

Apple execs are insistent that no one can disclose the technical secrets of how the dinosaurs were created until after the series has aired. But producer Tim Walker reveals that every creature was designed from the skeleton outwards, with layers of muscle and flesh added at each stage.

‘This is a magic trick,’ he laughs. ‘I wish I’d felt this excited about learning when I was in school. Everything in this series makes me want to find out more.’

The five episodes take us to forests, fresh waters, deserts, coasts and icescapes. The backdrops are real, filmed around the world, so CGI animators could drop their creations into real landscapes.

The result is a show unlike anything seen before. Mike admits the most nerve-racking thing was showing the initial edit to Sir David – his approval is priceless.

‘These are not monsters. They are extraordinary animals with complex behaviours,’ Sir David said.

‘I don’t know how you could have done it any better.’ The great man’s reaction was everything Mike hoped for.