My ringside seat at this pulsing geyser of squalid petulance: JAN MOIR on the Johnny Depp courtroom drama that uncorked fizzing horror of his marriage to Amber Heard

Was it really only four months ago when Johnny Depp and Amber Heard uncorked the fizzing horror of their marriage in a British courtroom?

Four months in which Depp must have enjoyed moments when he felt hopeful about his future and the outcome of this libel trial, only to have them dashed so completely yesterday.

Now he faces ruination, for what studio or director would dare to employ him after this career-ending outcome?

During the peculiar, fractured summer of 2020, the Depp trial at the High Court was the hottest — and saddest — show in town. Covid had turned Central London into a ghost town. The theatres had gone dark as actors and actresses mouldered unnoticed and unlit; once-thriving careers gathering dust. 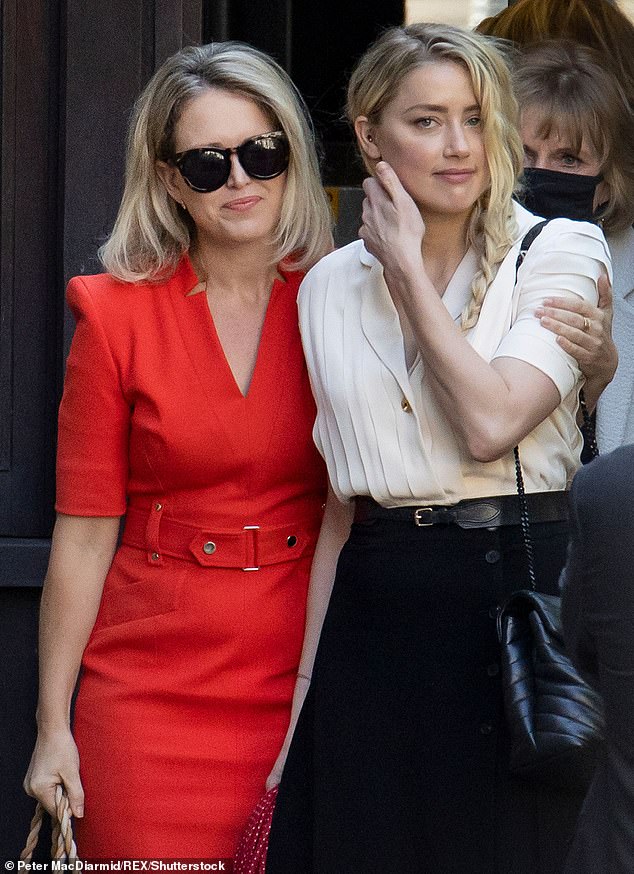 Was it really only four months ago when Johnny Depp and Amber Heard (pictured with her lawyer Jennifer Robinson) uncorked the fizzing horror of their marriage in a British courtroom?

Only Johnny and Amber still blazed away in the spotlight, their grim relationship garnering headlines across the globe. For 16 days in court, we witnessed the depths the Depps had sunk to — and they were awful to behold.

I attended the trial on days when both Depp and his ex-wife Heard gave evidence. The media was corralled in an overspill court, where socially distanced journalists watched the feed from the trial on a monitor; a screen no bigger than a standard television set.

Four months in which Depp (pictured at the High Court in London to give evidence in his libel case) must have enjoyed moments when he felt hopeful about his future and the outcome of this libel trial, only to have them dashed so completely yesterday

It all poured out, day after day; a pulsing geyser of squalid petulance and endless, endless fights, as described by a wife who needed her husband to grow up, and a husband who needed more support than she could give him.

At home they hurled decanters, champagne and vodka bottles, saucepans and mobile phones at each other. In court, they threw accusations and blame, rebuttals and denials.

And we heard about every last cough, spit and poop, from the digestive problems of their dogs to the stained bedsheets, the tantrums, the bruises, the vomit, the fights, the drink and drugs. Johnny’s appetite for the last of these was voracious; Amber busied herself taking damning, secret photographs of his roaring addictions and his disgrace.

Of the tenderness they must have once felt for each other, there was no trace. Not once did I detect a splinter of affection or remorse from either party towards the other.

Instead, they just carried on fighting their own dirty little war, ravaging what was left of their mutual dignity in the process. The relentlessness was unsettling. One could only mourn the sadness of this lost little marriage, dissolved somewhere along the way in a stew of drink and drugs amid the luxury of their lives.

They lived in a nest of penthouses in Los Angeles, on a private island in the Caribbean, in the finest of hotels and rented accommodation. Yet they ignored the fine furnishings and brawled as if they were in a hovel instead.

On the surface during the trial, it was oh-so-civilised as the couple meekly acted out their parts. Depp would arrive at court before 10am most mornings in a suit and tie, his eyes hidden behind a different pair of sunglasses every day.

He would take the stand, drum his tattooed fingers and always respond with scrupulous politeness. ‘Yes, Ma’am. ‘No, Sir,’ he would reply to lawyers.

Heard presented herself as a wounded free spirit determined to prevail. In the witness box she applied red lipgloss with a wand, checked it in a tiny mirror, blotted it with the back of her hand. She was ready for her close-up at all times.

‘Are you telling the court the truth?’ asked one of Depp’s representatives. ‘Yes, ma’am,’ she replied crisply. 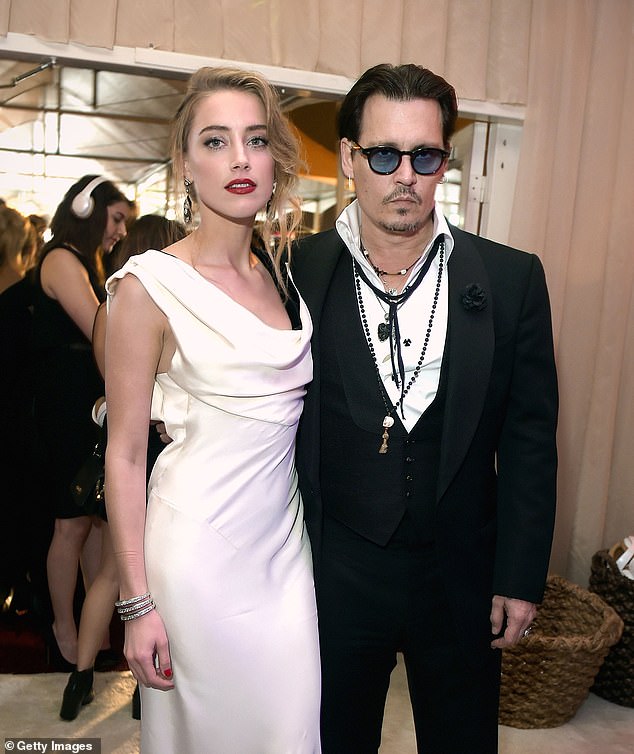 Only Johnny and Amber still blazed away in the spotlight, their grim relationship garnering headlines across the globe. For 16 days in court, we witnessed the depths the Depps had sunk to — and they were awful to behold 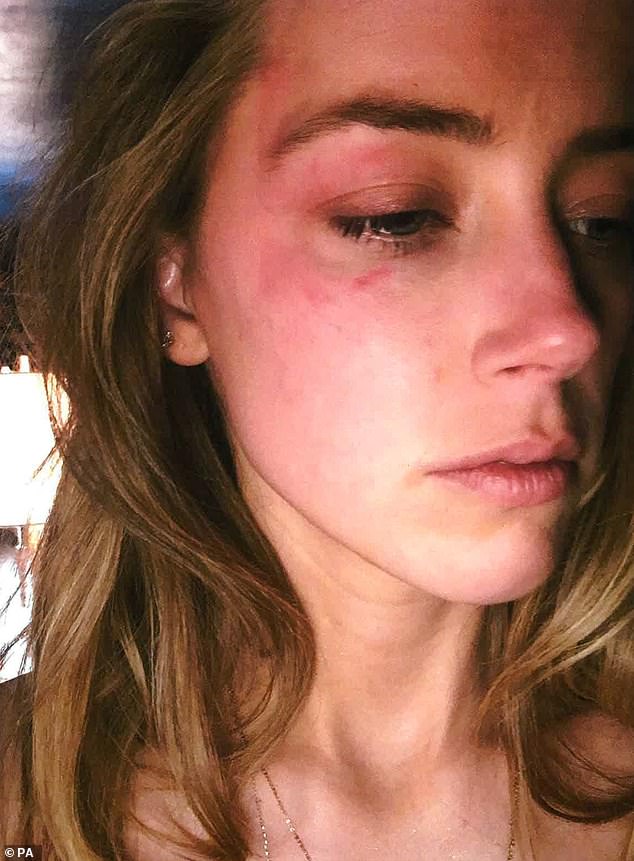 And we heard about every last cough, spit and poop, from the digestive problems of their dogs to the stained bedsheets, the tantrums, the bruises (pictured is Amber Heard with bruising on her face), the vomit, the fights, the drink and drugs

Amber could remember some incidents precisely but was hazy about others. In this her performance was better than Johnny’s; his recall was far patchier.

The case is, and was, astonishing. It unzipped the restless world of the beautiful and the damned who have everything and nothing; it blackened the character of a man loved by millions as Captain Jack Sparrow, Edward Scissorhands, Tonto in The Lone Ranger and Willy Wonka in Charlie And The Chocolate Factory.

I wonder if Depp now regrets bringing the action against The Sun newspaper in the first place, whose allegation that he was a ‘wife beater’ brought this whole sorry circus into court.

On the first day of the trial, Amber Heard talked of the agony of having ‘my truth questioned’ and having to share the ‘intimate details of my life with Johnny’. On the last day she was a bit more chipper, as she went off for a sushi dinner with her friends after stating she had ‘put my faith in British justice’.

That faith seems to have been justified. But what next for the man she once loved?