Darlings, I really did have a ball! Joan Collins was a Cinderella who’d never been invited to fashion’s most fabulous gala… until this year. Now read her riotous, star-spangled account of a night she’ll never forget

Five months ago, when I was first invited to the Metropolitan Museum of Art’s famous ‘Met Gala’ in New York, my first thought was ‘What shall I wear?’

I mean, you would, wouldn’t you? Even royalty in the form of Princess Diana has attended.

Every year the ball, held in aid of the museum’s celebrated costume institute, has a different theme.

This year it was ‘camp’, which the dictionary defines as ‘deliberately exaggerated and theatrical in style, typically for humorous effect’. 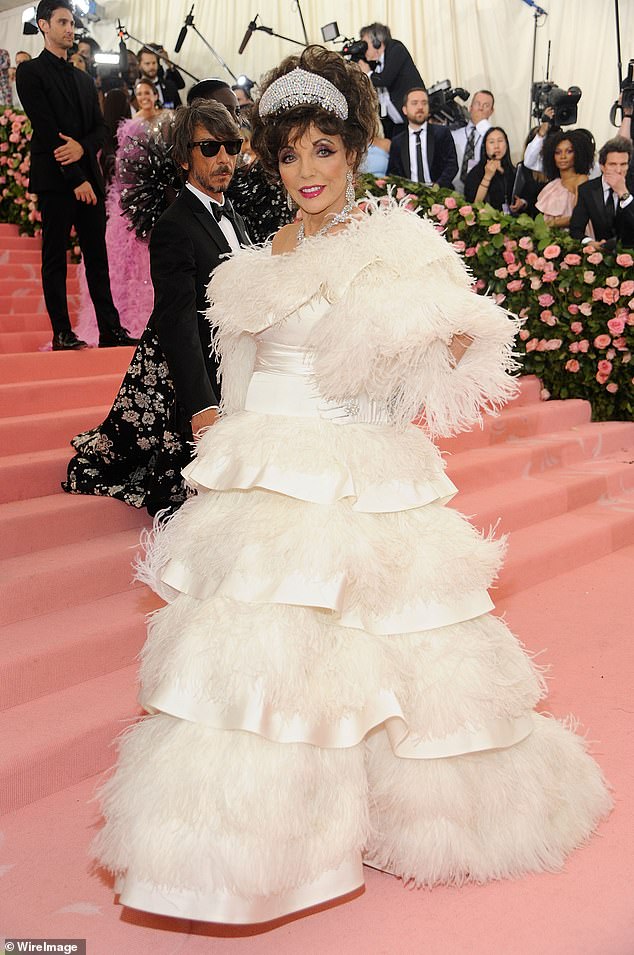 It’s a daunting prospect to achieve this, competing with all the high-powered style and glamour while remaining dignified. But having been invited by the fashion house Valentino, I was comforted by the fact that its wunderkind, head designer Pierpaolo Piccioli, was going to design a dress for me.

As I fretted about what that design would be, my PR Jeffrey Lane, who was co-ordinating with Valentino’s people, soothed my fevered brow: ‘They said leave it all to him. Pierpaolo will send you the sketches.’

Six weeks passed and no sketches arrived. ‘Don’t worry,’ counselled Kate, the Valentino PR, ‘we can organise a dress in a week — we did it last year for Lady Gaga.’ Another month passed and now I was in full-blown panic. This was the Met Gala! My first one!

Finally they arrived, five beautiful fashion sketches — exquisitely packed and boxed in Valentino boxes trimmed with white ribbon — of dresses that were, oh, dear me, a bit too ‘ingenue’ for me.

Pierpaolo and I went into full collaboration mode from that moment on, with texts, emails, photos, hand drawings and hasty calls placed at various hours of the day to account for the time difference from LA to Rome.

And, with four weeks to go before the grand event, another Valentino box arrived, hand-couriered from Rome to London for my first fitting, containing a dress in heavy white silk faille ruffles, absolutely covered in feathers. 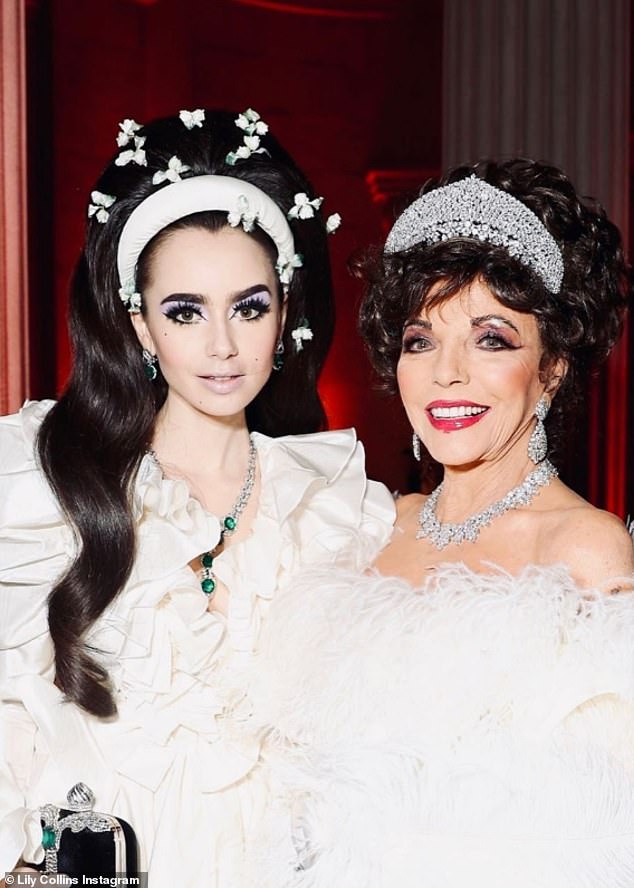 Camp? Oh yes, completely. I adored it and decided to camp it up some more with diamonds by the yard.

I wasn’t about to borrow from any of the jewellers, as that would entail being shadowed by security officers in scenes reminiscent of Ocean’s Eight, so my favourite LA stylist Rene Horsch and I combed the shops for gorgeous costume jewellery and capped it with a zenith of camp — a tiara.

My husband Percy and I arrived in New York on the Thursday before the big day, which is always the first Monday in May. On Friday morning and Saturday afternoon I had the final fittings with the great designer himself. ‘Call me pee-pee,’ said Pierpaolo Piccioli. ‘I’ll try,’ I replied.

He was great fun, and a wonderfully receptive designer who appreciated my feedback, even when I added more feathers. He took in the bodice as I’d lost weight since the last fitting, and added more and more feathers. I did my hair, make-up and tiara placement at home and went to the Pierre Hotel to get dressed and meet the rest of the Valentino coterie.

We stepped into the courtyard of the hotel to what felt like an opening night with about 200 fans gathered around, whooping and cheering and dozens of paparazzi snapping jauntily.

We piled into two huge SUVs of the type that Donald Trump uses for his flotilla — not easy to do in a massive crinolined skirt. The traffic was an utter nightmare, with bumper to bumper jams, so we passed the time watching the arrivals on Vogue’s Instagram feed.

We saw Lady Gaga do her camp striptease on the pink carpet. She arrived in a huge fuchsia hooded outfit with a cape, surrounded by male dancers in tuxedos brandishing black umbrellas. She strutted and posed for the cameras then stripped down to a black gown. 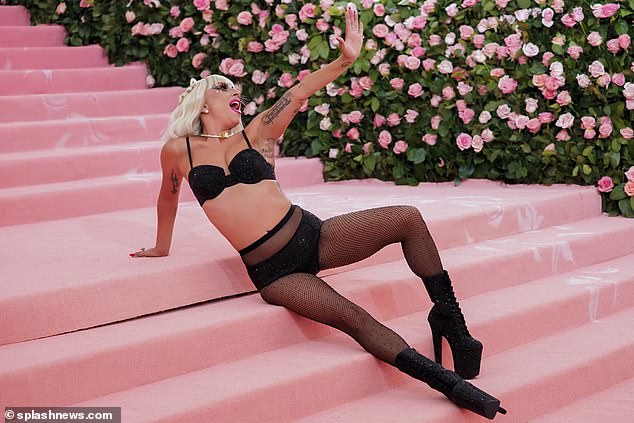 We saw Lady Gaga do her camp striptease on the pink carpet. She arrived in a huge fuchsia hooded outfit with a cape, surrounded by male dancers in tuxedos brandishing black umbrellas. She strutted and posed for the cameras then stripped down to a black gown

‘She’s Lady G, she gets away with it,’ said Carlos Souza, the brand ambassador for Valentino. We were thoroughly entertained. Dear Lady G — thanks for lightening the tedium of NY traffic!

Two great performing artists, performing magically. Serena Williams, one of the chairs of the committee, arrived in yellow sneakers — smart, I thought.

We finally arrived at the traditional and austere facade of the Metropolitan Museum, which was a vision decorated in pink flowers, pink feathers and gigantic pink flamingos which, according to the doyenne of fashion, Vogue editor and chair of the ball Anna Wintour, are the quintessence of camp.

We shuffled along impatiently in a long queue before we were allowed onto the red — no, pink — carpet. I had to manoeuvre past vast trains, and duck armies of make-up and hair experts all tweaking bits of their clients. 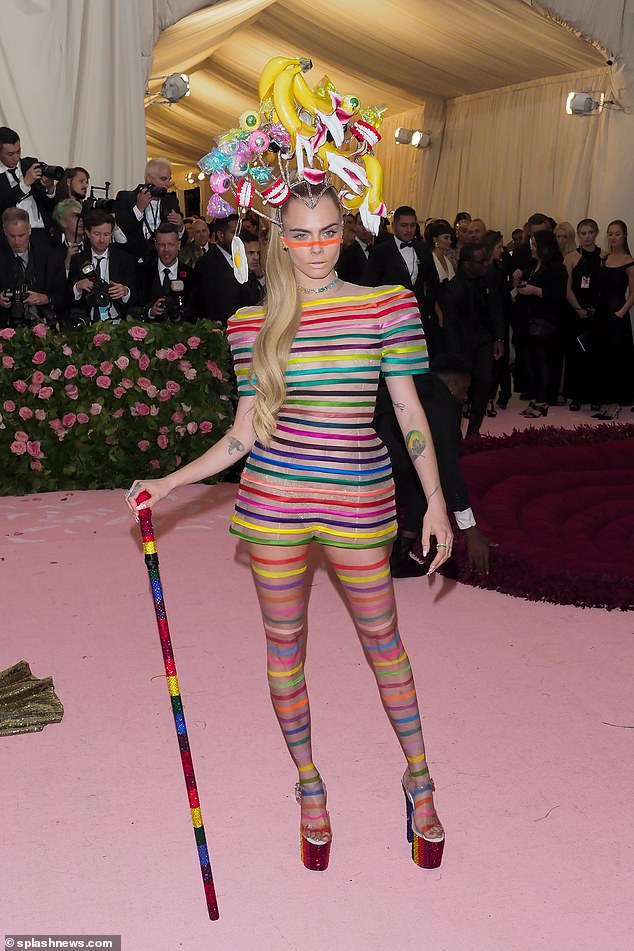 ‘A glass of white wine, please,’ I croaked to a waiter, then said hello to Demi Moore, chic in a YSL tuxedo; the Delevingne sisters, Poppy and Cara, the latter wearing the highest platform shoes I’ve ever seen

It was a little like standing in line at the Waitrose checkout in a lunchtime rush, except you were surrounded by the likes of Idris Elba, handsome in a heavily embroidered jacket, and RuPaul, all 6ft 5in of him in a multi-coloured sequin pant suit. Tom Ford, looking soigne in a simple dinner jacket with a white gardenia, came to give me a big hug.

Then the diva of divas and the last of our Valentino team, the stunningly beautiful Naomi Campbell, joined us, glittering in a pink lace body suit topped with a huge floating pink-plumed cape and train.

A man, holding a piece of plastic, knelt before her and fanned her feathers so they fluttered prettily. A human wind machine — clever. We all hit the pink carpet together. The photographers whooped then ordered us around as we all stood arm in arm.

Naomi put her arms around my shoulders for a hug and I almost toppled over. I don’t know how Victorian ladies managed their corset and crinoline but I consoled myself with the thought that they didn’t have to wear 6in stilettos and have 5,000 cameras trained on them, while hordes of fans yelled and screamed. 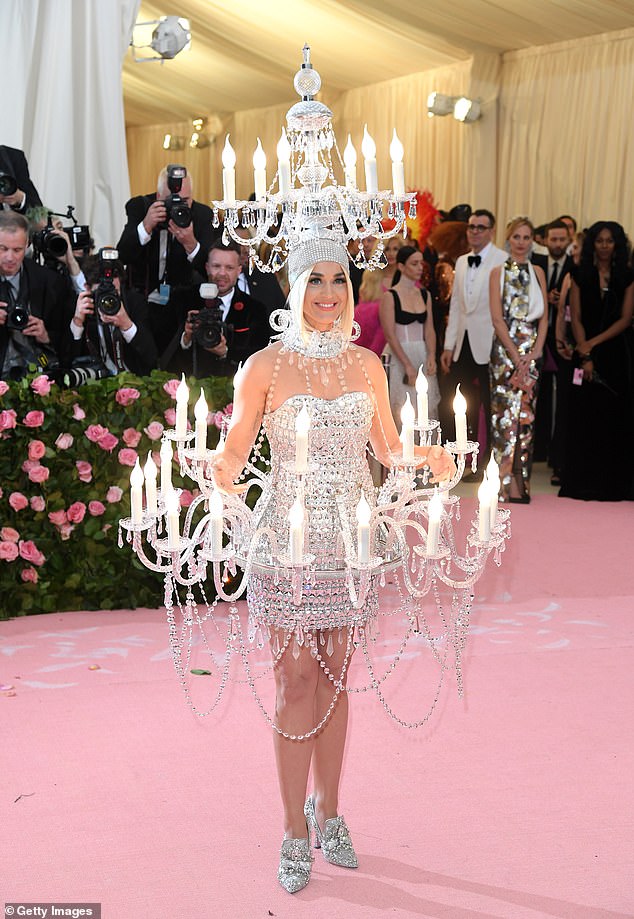 ‘A glass of white wine, please,’ I croaked to a waiter, then said hello to Demi Moore, chic in a YSL tuxedo; the Delevingne sisters, Poppy and Cara, the latter wearing the highest platform shoes I’ve ever seen; and Kate Moss looking gorgeous in silver sequins. Lily Collins and I laughed about the days we lived in the same building in LA and the postman constantly misdirected our mail to each other.

As I took a grateful sip of my wine Carlos took me by the arm to be interviewed by the fashion journals. After one more sip he dragged me off again — to dinner, I hoped. But another queue loomed ahead. People chatted excitedly while manoeuvring their trains and huge headdresses as we moved agonisingly slowly, one by one, negotiating yet another set of pink carpeted steps.

I was fascinated by how Katy Perry managed her chandelier so gracefully and then disappeared into the bathroom to return for dinner dressed as a hamburger.

Finally, we arrived at dinner — an exquisite panorama of pink. I managed to stumble to our table, my feet now throbbing.

‘Hurry up and eat — Anna likes to get things going so we can watch the entertainment,’ whispered Carlos. I rushed through my delectable tomato tartlet but was unable to face the fabulous fillet steak, which I knew from past experience would haunt me for the rest of the evening.

An ominous crash of music preceded Lady Gaga on the stage, casually dressed in bra, knickers and fishnets, who gave a speech about loving each other, inclusion and diversity, and embracing your ‘inner camp’.

She introduced the stars of Pose, Ryan Murphy’s new TV series about the trans movement in Eighties Manhattan. Ryan himself was there in top-to-toe sequins, channelling Liberace perfectly. It’s the rumour that he suggested the theme for this year, so he certainly ‘walked the walk’ of which he talked.

As dancers filled the stage, they parted to reveal the icon of icons — Cher. This was a great and delightful surprise as the entertainment is a closely guarded secret. The legend was dressed down in ripped jeans, a tiny top, an anorak and a long blonde wig — the complete opposite of camp, but nevertheless wonderful and ageless.

Bette Midler, wearing a top hat and tailcoat in glittery black sequins, came to our table and boogied with Julianne Moore, and I glimpsed Gwyneth Paltrow and Katie Holmes doing the same. 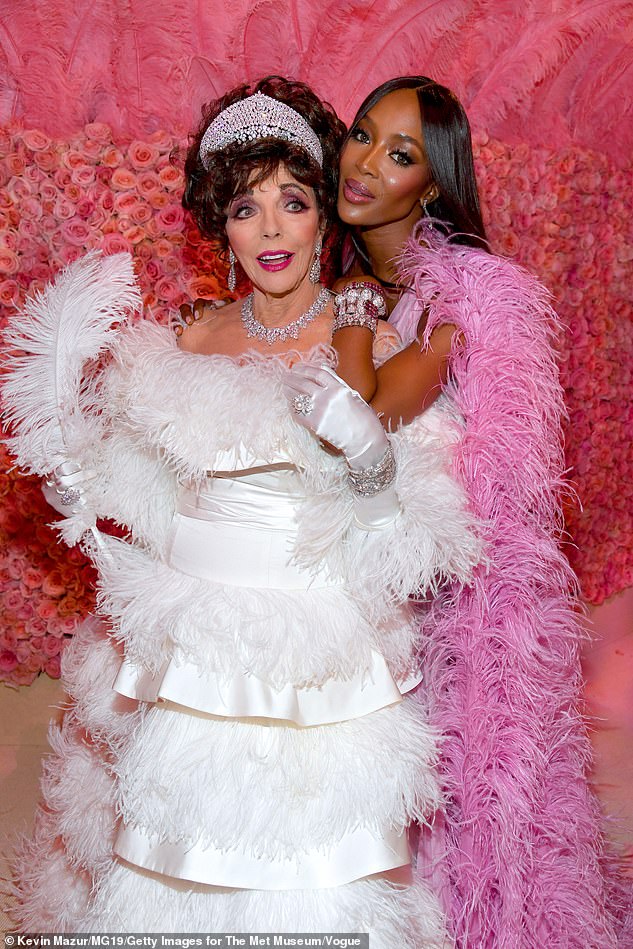 Joan and Naomi: During her time at the Met Gala, Collins was spotted mingling with guest such as supermodel Naomi Campbell 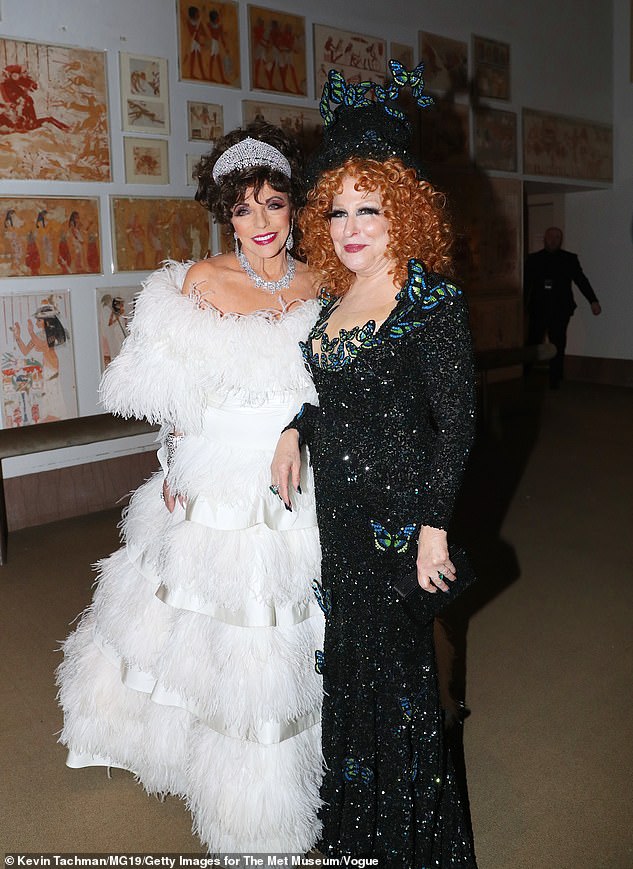 Joan and Bette: Collins also posed with Bette Midler, who arrived at the bash in a dress inspired by her 1993 classic film Hocus Pocus

Cher left after her first number and came back wearing , it seemed, her original Bob Mackie-style sleek black embroidered bodysuit and a massive black curly wig, and sang Believe. Harry Styles jumped on the table in front of us in a see-through blouse and pussycat bow, obscuring our view and ignoring our entreaties to get down.

The people started to get up to leave — and fast! Bella Hadid, looking chic and exquisite in a black sheath with long beaded gloves, actresses Zendaya, Lupita Nyong’o and Emma Roberts, and supermodel Karlie Kloss led the troops in the massive exodus.

Managing to ooze past this wall of names, pandemonium reigned as everyone tried to find the cars, limos and truck. It was a frenzy, so Pierpaolo lent me his jacket as two of NY’s finest — the policemen tasked to protect us all — looked genuinely thrilled as Billy Porter and I chatted with them while we waited for our carriages. 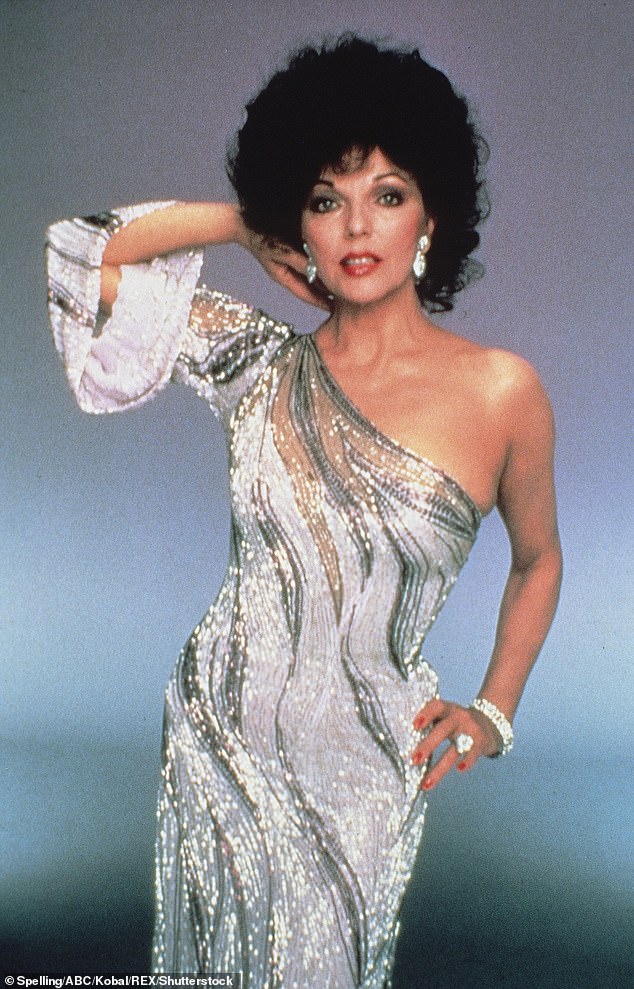 Throwback: Joan Collins starred on Dynasty from 1981 until 1989

We finally arrived at Hunter College, the venue of the Gucci after party, where guards were efficiently turning away anyone who was not on the list.

Inside, we were escorted by the security officer to a basketball gymnasium, the scores of the last game still posted on the board and ‘Go Hawks!’ posters on the walls. Within a minute someone fell and tipped the table over, which tipped my glass of wine all over my feathers. ‘Time to leave!’ said Percy firmly, to which I agreed weakly, thinking: ‘My feet will never be the same again.’ I must have walked five miles.

But what an experience it was. I loved my first Met Gala and I would certainly go again in a heartbeat, although at $30,000 a seat I’ll wait to be invited!