And John Mayer was involved

More anecdotes and memories are being shared about the late Bob Saget.

In a new clip from Netflix’s “Dirty Daddy: The Bob Saget Tribute”, longtime friend and costar John Stamos shared the final text exchange he had with his “Full House” pal.

“I’m going to read my last text from Bob,” Stamos said. “It said, ‘I love you so much. I will say that God gave me the brother that I wanted.'”

“Well, you have a lot of ‘God-given brothers,’ but I’m first, right?” Stamos texted in reply.

“[John] Mayer’s an amazing friend, but he’s more fair-weather,” Saget said. “You are always there, so you’re number one.” 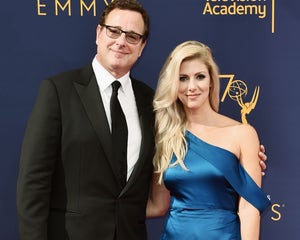 Saget was found unresponsive in his Ritz-Carlton hotel room in Orlando, Florida on January 9.

He was laid to rest on January 14 in a small, private memorial service for close friends and family at Mt. Sinai Memorial Park Cemetery in Los Angeles. Many stars were in attendance, including “Full House” cast members.

You can watch the trailer for Netflix’s “Dirty Daddy: The Bob Saget Tribute” below: