Honoring her family. Julia Roberts is showing off her stunning red carpet style — with a twist.

The Pretty Woman actress, 54, rocked a long black gown for the London premiere of the romantic comedy Ticket to Paradise, which stars Roberts and her longtime pal (and frequent costar) George Clooney. The dress was a simplistic elegant sheath but contained a stand-out statement: white writing that paid tribute to her family. 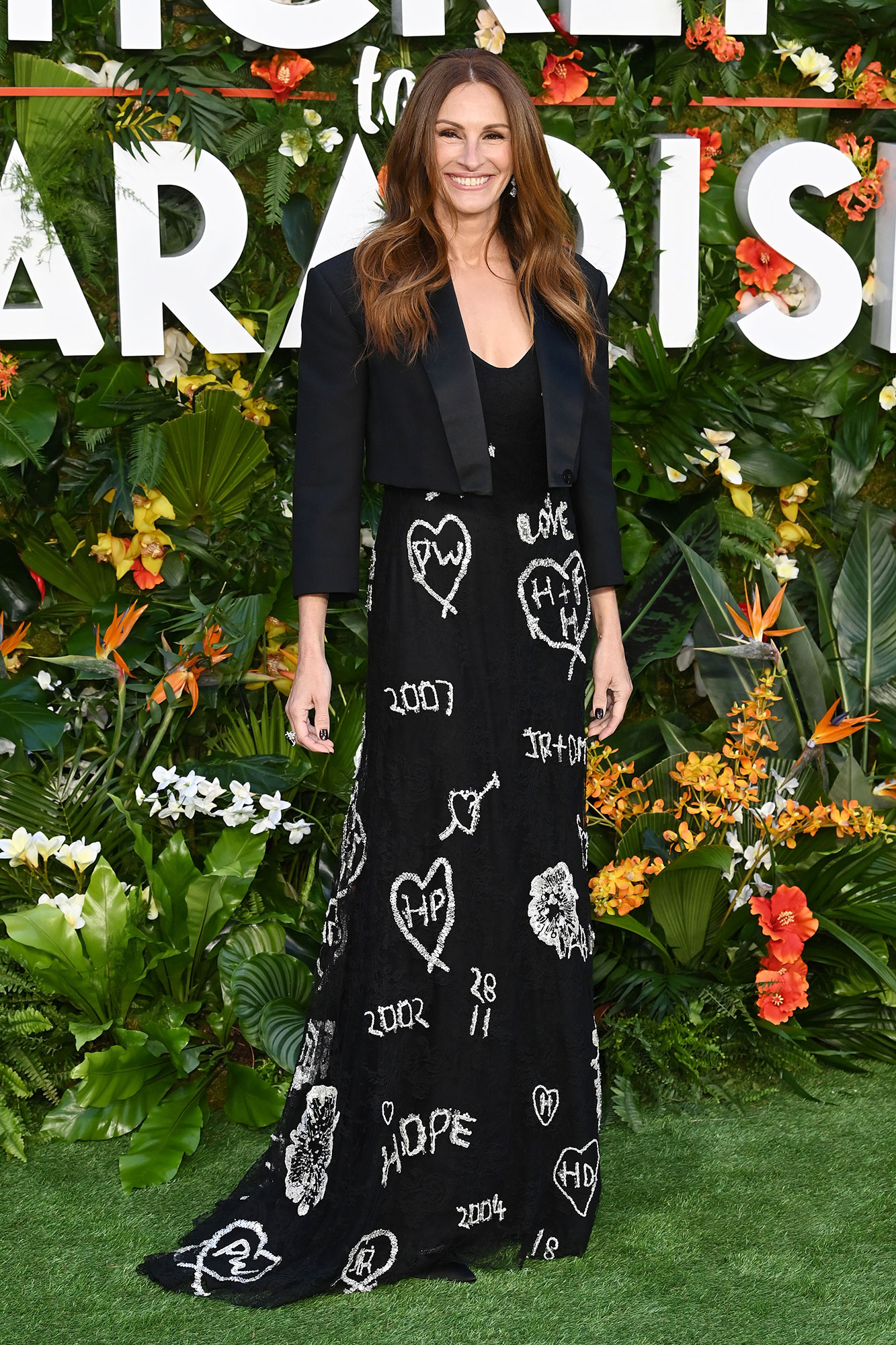 A closer look at the ensemble revealed initials, dates and symbols that are important to the Georgia native, her husband, Danny Moder, and their kids.

The gown featured the initials “JR+DM,” followed by the year “2002,” which is the year the pair tied the knot.

Roberts, who paired the floor-length look with a cropped black blazer, also added “HD” and “HP” to the style, which stood for the initials of the couple’s youngest son, Henry Daniel, 15, and their two twins, Hazel, and Phinnaeus, 17. The years “2004” and “2007” were also featured on the dress, which honored Hazel and Phinneaus and Henry’s birth years, respectively.

The My Best Friend’s Wedding star told Harper’s Bazaar in October 2018 that her children didn’t “have a true sense” of their mother’s fame.

“When they were starting to figure it out, it was like, ‘You’re famous?’” she told the magazine at the time. “And I said, ‘I think a lot of people might have seen the movie that I’m in or might know who I am.’”

In October 2017, the Notting Hill star admitted to Harper’s Bazaar that she was a “selfish little brat” before meeting Moder, 53, and becoming a mother. “It was meeting Danny … finding my person,” she shared at the time. “When I think about what makes my life my life and makes sense and just shines inside of me … it’s him. Everything has come from that for me.”

She added: “I was my priority [before]. … There are great things I’ve accomplished and I’d be happy to accomplish more, of course, to impress my children and my husband. But you know what? I’ve been spoiled already. If I wasn’t here today, I’d be in the carpool lane ferrying my kids to school.”

A source also shared exclusively with Us Weekly in May 2018 that Hazel, Phinnaeus and Henry were the Academy Award winner’s “top priority.”

“Julia just loves watching [Danny] with the kids,” the insider explained at the time, calling her a “hands-on parent” with a “simple [and] laid-back” life in Malibu. “It fills her heart and makes her love him even more.”