It’s Qween Lear’s final night in her big Sydney club on the cusp of the 21st century. Equal parts icon and trauma survivor, she deigns to hand over the reins to one of her three drag daughters forced to competitively express their filial love lubricated in a sheath of purple prose and piety.

The audience on the seating bank and dance floor of the Hordern Pavilion for this conjoined stage play and dance party know what will greet the winner of the crown for years to come: post-Olympics gentrification, urban development, rising property prices, dreary planning and building and liquor licensing approvals, lockouts and lockdowns.

The plethora of venues that made this a legendary bacchanalian and queer party city in the 1980s and 90s will be squeezed. Listening and love across the queer generations might be the first casualty, like a family fumbling to function.

But “nothing will come of nothing”, says our Qween, played by Sydney drag star Minnie Cooper (Aaron Farley). Lear is such a narcissist that she cannot see that her youngest daughter Cordelia (singer-songwriter Seann Miley Moore) loves her unconditionally, “no more, no less” than her scheming drag queen sisters Goneril (Patrick Dibben) and Regan (Etcetera Etcetera, aka Oliver Levi-Malouf).

Honouring the Shakespearean tradition for misunderstandings and musical interludes in this adaptation by Nick Coyle, Cordelia tries to pay homage to her drag mother by belting out her mother’s signature tune Tonight Won’t Last Forever, infuriating the Qween, who accuses her daughter of plagiarism and banishes her from the kingdom. 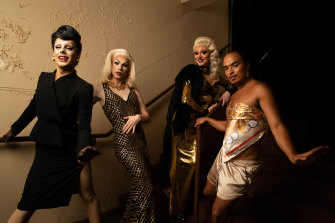 Farley, 49, and Moore, 30, sit down with Spectrum on the first day of rehearsals. Farley, in full make-up as Minnie for the photo shoot, says the show’s music is similar to 1990s Deborah Cox dance bangers. The music and lyrics in Qween Lear are specially composed by Laura Murphy.

Indonesian-born Moore, who grew up in Australia and spent several years in London building a performing career wearing earrings, gloss, heels and dresses, says the signature song is like a Lady Gaga number from her A Star is Born period.

Both Farley and Moore are conscious of queer history. They chat about the folk etymology, perhaps mythology, that attributes the word “drag” to stage directions in Shakespeare’s Elizabethan era, when women were forbidden on stage.

It’s an acronym that means “dress roughly as a girl”, suggests Farley, and Moore adds: “It referred to the gowns dragging on the floor.” 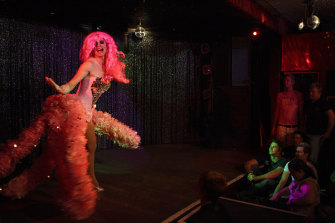 A legend on the queer scene: Minnie Cooper performs at the ARQ nightclub in Darlinghurst in 2007.Credit:Jone Reid/Fairfax

Moore’s praise for her queer elder is more effusive off stage than as Cordelia: “Minnie is a legend on the queer scene,” says Moore, before turning to Farley: “I remember growing up as a young queer kid going to Oxford Street and seeing you in all your fabulous and queer glory.”

Farley leans into this journalist with a helpful tip: “Everybody looks 35 in drag.” I must try it, I answer. “Oh, it takes years off. Just tape your face and you’re done.”

Both hope this show will bring generations together. “I feel like we’ve been in-fighting instead of singing together as one, instead of listening to each other,” says Farley.

“I love talking to younger people, and it’s funny, I was talking to a younger person with a big age gap of 25 years, and even though I hadn’t said anything yet, they disregard my trauma.”

Farley recalls the peak of the AIDS era: “We were outcast because of it, no one wanted to touch the gays, because they thought if you touch them, you will get sick.”

Qween Lear co-creators Lucas Jervies and Hugh O’Connor speak of the 1980s and 90s Sydney parties being framed around the AIDS pandemic: revellers “would bury friends on a Saturday morning and then party like there was no tomorrow on Saturday night, because for some there wasn’t”, says Jervies.

Revellers ‘would bury friends on a Saturday morning and then party like there was no tomorrow at night, because for some there wasn’t.’

“This one story was shared with us about someone dying of AIDS and being cremated and then his friends scattering part of his ashes on the Hordern dance floor while everybody was celebrating his life and loving each other.”

Jervies remembers the famed drag nights at Darlinghurst’s Albury Hotel in the 1990s, “a portal into something fabulous … like Willy Wonka’s Chocolate Factory”. This was augmented by the Mardi Gras, Sleaze, Recreational Arts Team (RAT) and many other legendary soirees of the era, often held on the same weekend.

O’Connor says, “the late 90s, early 2000s feels like it was the last breaths of that beautiful creative run in this city of queer parties and spaces”, and while there have been more recent greatly creative parties such as Loose Ends, Bad Dog and Club Kooky, “you have to wait for these parties, in Sydney especially”.

Then there is the mainstreaming of gay culture, and the rise of people meeting one another through apps rather than at bars and clubs.

“Change means evolution and a part of getting these amazing [equal] rights that we now have as queer people and less segregation and being more open and welcome in society is that we lose a bit,” says O’Connor.

Moore, who is unfussed by personal pronouns – the performer’s father uses “he” and sisters say “she” – says the trauma of Farley’s generation made freedom possible for younger queer people.

“Coming back to Australia [from London], I remember seeing the younger generation now really honouring their femininity, their [skin] colour … our queer elder brothers and sisters paved the way for [people] like me and a younger generation to walk down the street in a heel.”

For Moore, gender systems are used to “create order” and “create gender”, with boys directed to wear blue and girls to wear pink: “But why?” he asks.

“To be honest,” adds Moore, raising a brow.

Farley turns to Moore: “Stop saying that because then I won’t have a f—ing job!” and the pair burst into laughter before being called by the stage manager to rehearse.

Qween Lear plays Hordern Pavilion from January 7 to 16 as part of the Sydney Festival.