Labor must grasp chance to clean up murky visa system

It has been nine days of extraordinary revelations in The Age about Australia’s immigration system. Since the first instalment, our Trafficked series has unearthed the shocking extent of visa rorting, sex trafficking and foreign worker exploitation in this country.

The investigation has shown in detail how syndicates have manipulated flaws in the visa system to bring criminals and exploited workers into Australia, enabled by networks of corrupt federal government licensed migration agents, education colleges and unscrupulous “fixers”. 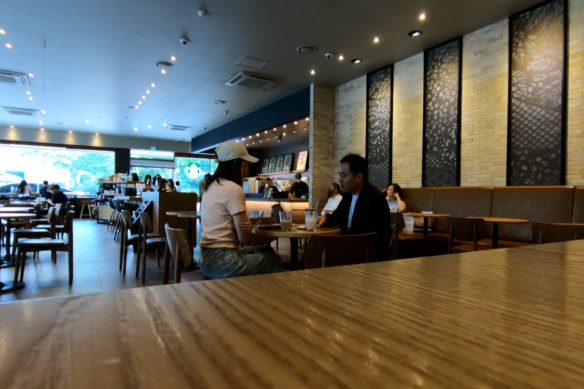 An undercover journalist was offered a pathway to an Australian visa over coffee.Credit:The Age

Moreover, as the series has revealed, this law-breaking and corruption has flourished under the noses of state and federal agencies that have spent years issuing confidential warnings about migration rorting – apparently to little effect. Abul Rizvi, a former deputy secretary of the Immigration Department, said the investigation pointed to “at minimum, an extraordinary level of negligence”.

On Sunday, Home Affairs Minister Clare O’Neil declared Australia’s visa system broken, saying it needed a thorough inquiry to work out what had gone wrong and how to fix it. She said she had received expert advice that “tens of thousands of people” might be unlawfully in Australia, including many who were exploited foreign workers.

“We’ve ended up with a system where there are massive visa queues, and where the people who actually legitimately want to use the system can’t properly use it,” she said. “And yet criminals who want to bring people into the country as slaves are able to somehow do it.”

So while Australian industry is calling out for workers – from aged care and fruit picking to highly skilled and highly paid sectors – the system is being clogged up by people such as Jack Ta, whose company allegedly parks drug traffickers in the visa queue designed for refugees to buy them a few years in the country to do their dirty work.

Trafficked revealed that human trafficking boss Binjun Xie was able to enter Australia and build a criminal sex empire even though he had previously been jailed in Britain for similar offending. Ta donated more than $25,000 to the campaign fund of former Liberal assistant home affairs minister Jason Wood, as his parliamentary committee ran inquiries into unscrupulous migration agents and visa cancellation for criminals. On at least two occasions, the agent dined with now Opposition Leader Peter Dutton when he was home affairs minister.

The series also told the story of a South Korean sex worker who arrived under an outlawed debt bondage arrangement and worked up to 25 hours in a single shift, often dealing with abusive clients. It demonstrated that a number of migration agents were comfortable advising customers on how to exploit the visa system with false documents and fake asylum claims, and using false education visa applications. It revealed that more than a dozen Australian education providers had been identified as allegedly “corrupt” by state and federal investigators.

The Home Affairs Department responded to these and other allegations by saying a suite of laws and programs existed to defend the integrity of the visa system. Dutton issued a statement saying he had “zero tolerance when it comes to any attempt to exploit our visa system and vulnerable individuals”. In the light of our investigation, it’s hard to believe either response.

O’Neil has unsurprisingly blamed her predecessors and commissioned two reviews: one into the scams and another into the broader failures of the immigration system. The government’s chosen inquirer, Martin Parkinson has an Aegean task.

As we have revealed, this complex, murky, slow system has been years in the making. There are significant players with a vested interest in keeping it that way and warnings about it have been ignored for years. Now there is an opportunity to make it simpler and fairer. It is imperative the government does not miss its chance.

Michael Bachelard sends an exclusive newsletter to subscribers each week. Sign up to receive his Note from the Editor.