Labor would compromise to get an Indigenous Voice in the constitution

Australia’s new Aboriginal affairs minister has pledged to seek cross-parliamentary consensus on the establishment of an Indigenous Voice in the constitution despite a potential stoush with the Greens, who believe a treaty and truth-telling should be the priority.

While the Greens and Labor agree that the Voice should be constitutionally guaranteed, they differ over important details, including the sequence in which the policy is enacted. The Greens disagree with the position in the Uluru Statement from the Heart that change should start with the Voice, followed by a treaty and a truth-telling commission. These disagreements have raised fears that Labor’s key policy could be blocked in the parliament. 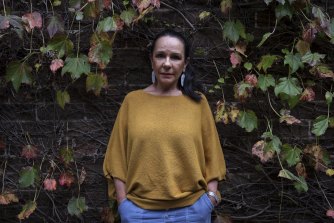 The minister, Linda Burney, who is expected to be sworn in soon, told The Age and The Sydney Morning Herald Labor could explore the potential of working on all three elements of the sequence set forth in the Uluru Statement simultaneously to achieve a consensus with members of the crossbench.

“Everything is on the table,” Burney says. “Why do we have to get one thing done before we can do the next thing? Is it not possible to work on a Voice and establish a Makarrata commission [a council or committee for discussing agreement-making and truth-telling] at the same time? I don’t see it as a linear process at all.”

The Greens’ view would become relevant in the Senate if the Coalition decided to block the referendum legislation in parliament. The government of Scott Morrison opposed a referendum, but the new Liberal opposition has not yet expressed its view on the subject.

Burney, who will be the first Aboriginal woman to serve as federal Aboriginal affairs minister, says the members of the crossbench in both the upper and lower houses had indicated support for the Uluru Statement. She says it is now her role to continue to listen, learn and help to build consensus. 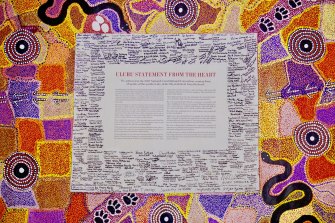 The Uluru Statement from the Heart.

The Greens have previously endorsed the Uluru Statement in its entirety, but were also vocal during the election campaign about prioritising the elements of truth-telling and treaty ahead of the Indigenous Voice to Parliament, prompting concerns that the minor party could derail a potential referendum.

Marion Scrymgour, the Labor candidate for the Northern Territory seat of Lingiari, recently said that the Greens presented the biggest threat to the implementation of the Uluru Statement.

“I’m not much worried about the Liberals, it’s more the Greens. While they say they are friends of Indigenous people, they’re not really because they just want to run their outrageous agendas all the time,” Scrymgour told The Australian newspaper.

The Rudd Labor government’s attempt to enact a carbon trading scheme in 2009 was derailed when the Greens joined the Coalition and crossbench senators to vote it down by nine votes. The Greens said they voted against the scheme because they believed it would be ineffectual and fail to lower greenhouse gas emissions.

The Greens were the first party to endorse the Uluru Statement but, shortly after the now re-elected Greens senator for Victoria Lidia Thorpe took office, they began to prioritise truth and treaty before the Voice.

Thorpe has been critical of Victoria’s Treaty pathway and was a member of a group that walked out of the Uluru national dialogue in 2017.

In a press conference on Monday, party leader Adam Bandt reasserted his party’s position on prioritising truth and treaty ahead of Voice and said the government had “a clear agenda” to implement the three elements set forth within the Uluru Statement. The Greens leader said there was now “a real opportunity in this parliament to advance justice for First Nations people.”

The government aims to hold a referendum in its first term in office but acknowledged that achieving a nationwide treaty would be complex and time-consuming. The Victorian Treaty process is the most advanced of all states or territories but was recently projected to take up to a decade to achieve statewide. 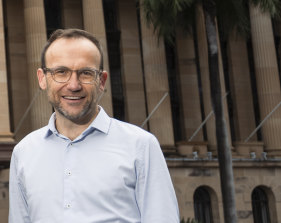 The recent Yarrabah Affirmation for the Uluru Statement from the Heart proposed two dates for a potential referendum on an enshrined Indigenous Voice: May 26, 2023 – the anniversary of the successful 1967 referendum – and January 27, 2024, the day after Australia Day.

Professor Megan Davis, co-chair of the Uluru Dialogue and a Cobble Cobble woman, says treaty-making at the state level was complex as well as time-consuming and warned that achieving a treaty or treaties at a national level would be more difficult still.

“This is why a referendum on a Voice is more exigent than a treaty or more truth-telling,” she says. “Treaties can take decades and decades to negotiate. Most Aboriginal communities who are struggling to provide adequate housing, and who have to go cap in hand every three years to beg for meagre resources, do not want to wait decades before they have a direct say in laws and policies.”

Davis says a successful “yes” vote in a referendum within the next term of parliament was “absolutely doable” and that research commissioned by the group shows a clear groundswell of support from the Australian people towards a referendum. 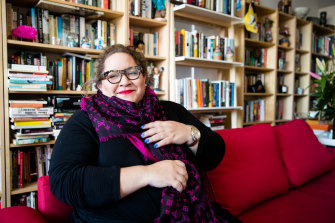 Constitutional law expert Professor Anne Twomey, who is the director of the constitutional reform unit at the University of Sydney’s Law School, agrees a successful referendum was possible, noting that decent drafts of the necessary words have floated around for years.

“The real problem, however, will be trying to get the Coalition onside,” Twomey says. “If it campaigns against the referendum, it would be extremely difficult for it to be won.”

A successful referendum requires a majority of voters in a majority of states, and a majority of all voters around Australia, to vote “yes”, and a scare campaign would “probably be enough” to defeat it, Twomey says.

“As no one would want to hold a referendum that was going to lose, it would then most likely be the case that it wouldn’t run.”

Burney says the new government is aware of the “very high bar”, adding that a lot more work is required to achieve bipartisan support.

The former minister for Indigenous Australians, Ken Wyatt, who was the first Aboriginal person to hold the Aboriginal affairs portfolio, told The Australian newspaper he would vote “yes” in a potential referendum on a constitutional amendment to recognise an Indigenous Voice.

“The Uluru Statement is absolutely important. Its underlying theme is about listening and having Aboriginal people heard at the community level and in the various regions … by all tiers of government,” Wyatt told the newspaper.

But Wyatt, who lost his seat of Hasluck in Western Australia in Saturday’s election, also said he wanted to avoid seeing Australia go to a referendum and fail and warned there was a lot of work ahead for the incoming government.

Burney says the work done since 2019 by Wyatt and the Senior Advisory Council to the National Indigenous Australians Agency, and the local, regional and national committees it established to advise on a “Voice co-design process”, would not be discarded by the incoming Labor government.

“It would be disrespectful and, quite frankly, stupid not to take into very deep consideration the work that’s been done by the expert advisory group,” she says. “They have delivered their final report, and I am sure that parts of that report are very relevant for new discussion and new direction.“